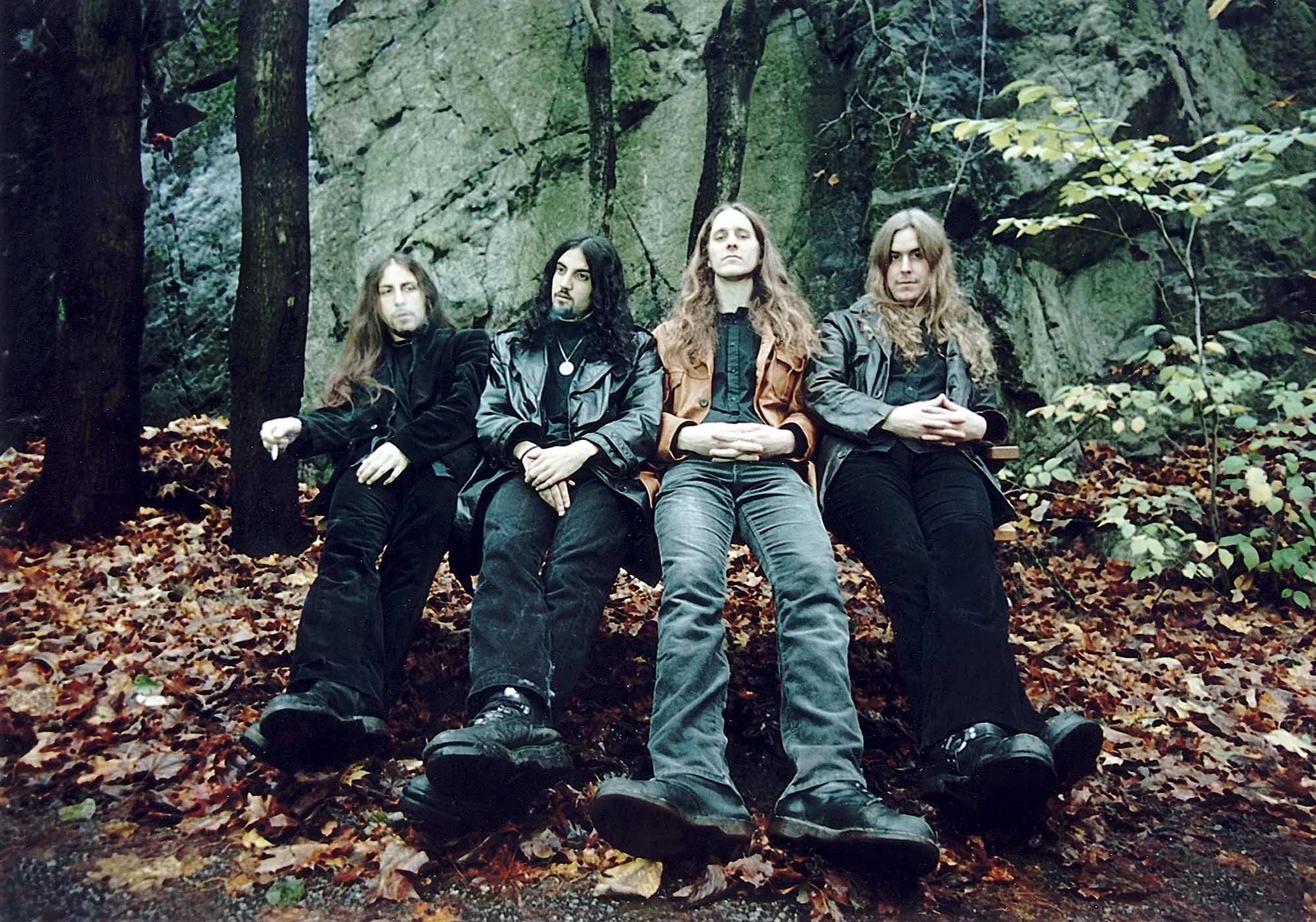 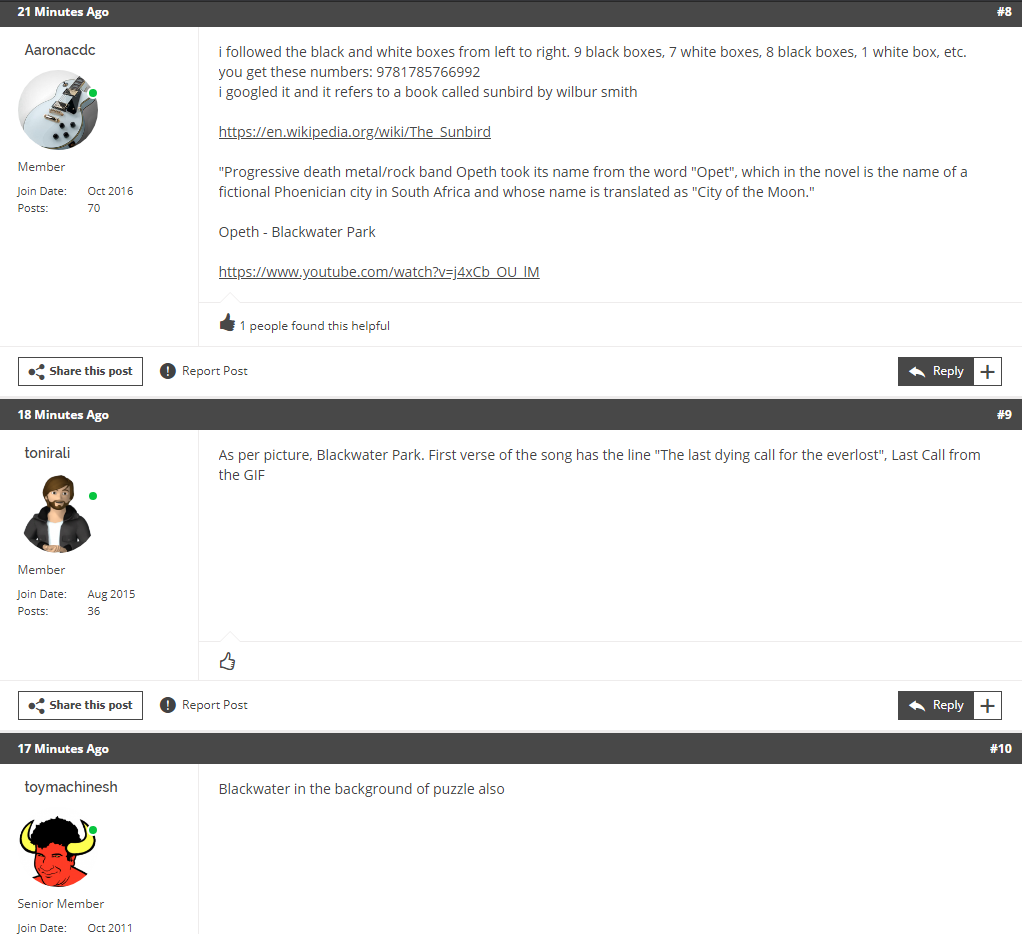 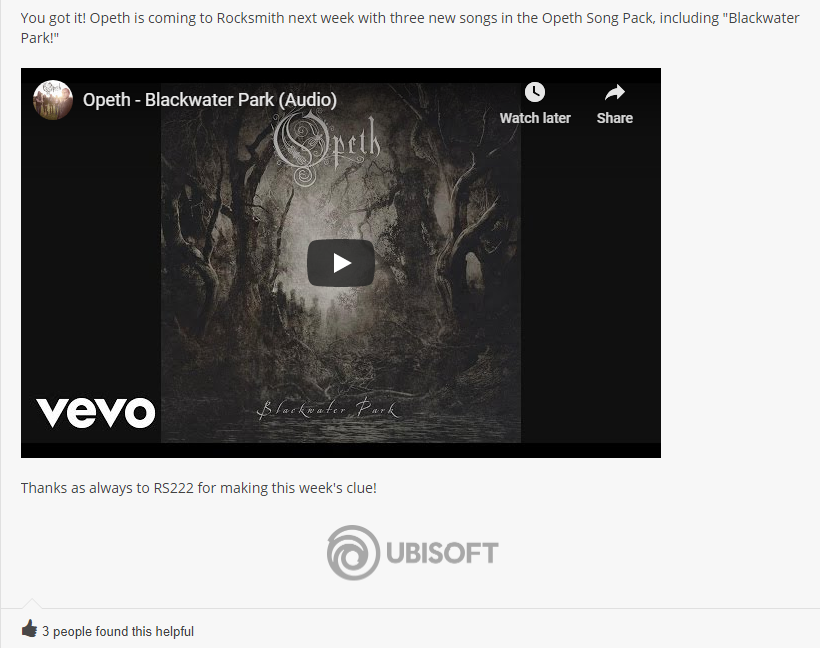 This is the first appearance of Blackwater Park in a music game!

Previously @OfficialOpeth has also appeared as DLC in Rock Band.

What other Opeth songs might we see join the progressive death metal masterpiece of Blackwater Park?

Ghost Reveries was a pretty big album for Opeth…

The contrasting album to 2003’s Deliverance contains many amazing songs, but Windowpane probably contains one of Opeth’s most emotive guitar solos (you’d need a Capo though)

Everything about this song is fantastic

Are you excited about @OfficialOpeth FINALLY coming to Rocksmith Remastered? Are you feeling sorry for whichever notetracker had to author these songs? Or is this just not your thing? Let us know!

In time the hissing of her sanity faded out her voice and soiled her name, and like marked pages in a diary everything seemed clean that is unstained. pic.twitter.com/3MfIa72aWg

The Prog packs seem like the best value. Every song feels like three songs and most seem to use more challenging chord shapes.

This is awesome! Opeth is one of my favorite bands and I’ve been waiting for this pack for ages. My dream pack would include Godhead’s Lament, To Bid you Farewell, and Heir Apparent. But its an instabuy regardless. I just hope it sells well, so that we can get Opeth pack two at some point.

Hessian Peel, Bleak or Harvest -- I’d go crazy for any of those

BTW 2 things, more Opeth packs (clearly a bunch of us made our requests long, long ago and have been waiting), but this gives me hope for some of my other long awaited Euro bands
like Satyricon, Samael, Emperor, Celtic Frost, among others could still show up.

Since we seem to get British bands I didn’t include the likes of Killing Joke (but we should have them, 50 songs worth), & the likes of Rammstein are just forces of nature that just happens when it happens.

Still not giving up on expanding the palate a bit either, flamenco & classical guitar would never awesome, Django Reinhardt really is needed, maybe slip never a little Ali/Vieux Farka Toure.

Totally agree on the variety… I’d like Toure, or Mdou Moctar, Blood Ulmer, maybe some neo-soul, and some real classic giants like Django… and of course Zappa… but I know they won’t give rights… they can’t even agree between the family!!! As for more heavy stuff -- I’d like The Sword, Merciful Fate, Nomeanso, Fugazi, Voivod, Gojira, DRI, so many others… even some classic Rainbow…

Voivod is actually my favorite Canadian thrash band. Since I found out it’s already been in a game I thought ubi would have at least gotten us X-stream, which would be a fun track.

However you said Zappa(& I’ll throw in Beefheart), but I really wish the family could get over themselves it would be nice to see some in here. Although he had a lot of sides so it would never be fully represented. That being said one of the most straightforward tracks Joes Garage would be great for a lot of reasons.

A lot of good stuff to go. The next video game system upgrade is coming quickly & I’m guessing, like a lot of people new RS edition. If so I expect to see some big releases drop. We’ll see.

Killing Joke is one of my most wanted bands and i’d be really psyched to see Celtic Frost or Voivod.

Django would be exiciting.

I know, a lot stuff we don’t have, and not enough of others plus when key tracks are missing it is frustrating. Long as they keep releasing stuff we’ve got a shot.

I wouldn’t expect anything from Ghost Reveries though, they used a weird tuning for that album.

They feed 30 years ago & I had orchid 25 years ago, and while being great players haven’t done anything new musically (not output wise, they keep making albums) for more than 10 years but they just simply are the best Swedish band there is.

I have evil spell check, formed of course. How did that become feed?

Haha! Thanks -- yep -- I am twenty years late on everything… I was born nearer to the first ever heavy metal album than the last…

Omg I thought it would never happen! Day 1 purchase. Cannot wait. I’m furloughed as of next week so this is perfect timing.

YES! AFTER REQUESTING OPETH FOR YEARS! This is easily my favorite pack of the year and we only know one of the 3 songs. Really I won’t complain about any song but “Ghost of Perditon” and “Bleak” would both be fantastic choices. “Sorceress” is a newer one that sounds like would be full of fun guitar & bass riffs, it’d be cool to see that one as well. Tuesday CANNOT come soon enough for me.

Hey, you called it precisely.

I literally just saw that. Crazy, my choices never become what we get haha.

well is better than I supposed xD

I wish the pack was the entire Blackwater park album. Orchid is the first album I had of theirs. From that through BP is there best work, but I’ll take anything as long as it’s not from sorceress, that was such a pointless disappointing album that was anything but a step forward. Admittedly some of the prior albums had been nothing new but they had some good stuff and was well crafted. Sorceress just sounded like they had a contractual obligation to fulfill. That being said they are awesome live & probably the closest thing there is to a modern band being a Led Zeppelin. But for anyone not familiar with them the output from the first 10 years of albums contains a wide variety of things and really is their best stuff before the diminishing returns. But really go see them live if you can, never a bad show in 20 years that I’ve been to. All my friends, gf’s & ex-wife agree on that as well. They are super consistent performers.

Umm… closest thing is to a modern Led Zeppelin… check out the two packs for Greta Van Fleet! They refuse to say ‘that band’s’ name in interviews -- but every riff is derivative of LZ… but I still like it!

Uh, read it again. I clearly didn’t say sounds like LZ. While we do have the exact perfect songs & amount of them on RS (they nailed that, at least until the new album), I didn’t say most successful disciple of LZ, that would most obviously be soundgarden (& all the Seattle bands were by what they did or didn’t do but no one embraced it like soundgarden, AiC mean while went the other way by deliberately picking BS but not speeding it up as BS initially was just like Chuck Berry & others), RATM would’ve been the pick most people would’ve missed even though it’s right in front of them. The list of comparables there like soundgarden are very long. Just having zack fronting it seems to throw everyone off til you go through the check list. A friend once said his favorite band was RATM m, because nothing else’s sounds like them. I uncontrollably started laughing, which just pissed him off, my retort, two words LZ. His mind practically exploded and I had to hear how similar those bands were for years. No duh, it’s super obvious if you listen. They just don’t do acoustic, the acrobatic vocals & if you were to call it light & shade it’s applied very very differently & in a more limited way. Although it doesn’t line up quite the same any more since their is more albums you used to be able to stack them up literally against each other and even get a similar but unique arc between Opeth & LZ. First albums are the loudest, most achievements in the middle, good moments but a bit of a retread here and there towards the end. Along with lots of other things. But uses of “light & shade”, oh yeah. Lot… Read more »

While all bands (& their members) have multiple influences, some have a very clear influence, tool is more of a hybrid. They’re more like a king crimson/rush mashup with a better singer.

That would explain why they toured with them (King Crimson)

I remember that but missed it. Did they not tour with Rush? They all love those guys.

Kiitos Oni. I love all the bands!!! I’m relatively new to Opeth tho… but I think in the 2000s I was more listening to other genres… and if hard, more like Fugazi etc. I’m still stuck in the 70s and 80s mostly… Rocksmith has actually put me on to a few bands I otherwise didn’t listen to which is great. I’m also glad it has given us a few excellent punk or metal classics such as Crystal Mountain, Walk, or Souls of Black -- all of which I used to play on radio back in the day.