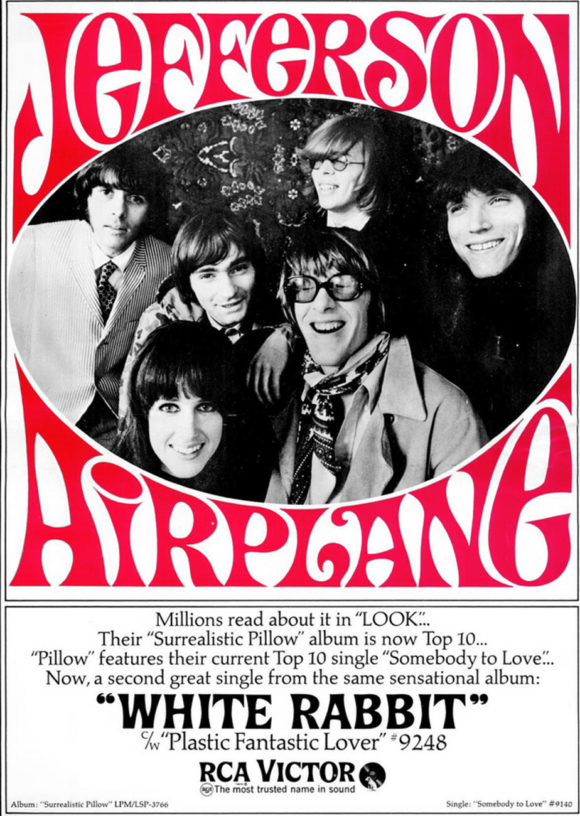 Looks like Rocksmith will be taking yet another trip back to that good old era of cherished classic rock, the 1960’s!

@UbiParadise posted the clue earlier today, let’s have a look-see:

It’s the Haight-Ashbury district of San Francisco, California. Since it’s a GIF, the password HaightAshbury revealed this:

Each snippet is a scene from the movies Fear and Loathing in Las Vegas, Platoon, Supernatural, and The Game. Each scene has the song White Rabbit by Jefferson Airplane playing in the background:

Jason confirms it’s a mix 3-pack of artists from the 1960’s, with a second hint coming sometime this weekend :-O

What could the other artists be? The authors at The Riff Repeater have a few ideas:

Would be cool to get some 60’s Folk music from them in the game, and yes… I’d rather have this song than Sound of Silence.

Daniel’s Pick: The Guess Who – Undun

As a Clevelander (#allin216), two radio stations have been in regular rotation on the car radio for many years: Classic Rock 98.5 and 107.3 The Wave (the Cleveland Jazz Fusion/Smooth Jazz Station). As such, I am one major sucker for Jazz Fusion, and this popular track from 1969 by the Guess Who comes pretty darn close to fulfilling a dream I’ve had of finally having Jazz guitar on Rocksmith. Just listen to those chords and that bassline.

Oscar’s Pick: The Lovin’ Spoonful – Summer in the City

It’s no secret how big of a fan I am of The Lovin’ Spoonful, and this sweltering hot summer is the perfect time to bring arguably their most well-known song to the game. It’s a classic 60s rock song with some great tones and it’d be the perfect way to get one of the best groups ever in a rhythm game at last.

Ted’s Pick: Buffalo Springfield – For What It’s Worth

Stop look, what’s that sound everybody wants this song in now

There you have it, Rocksmith fans, what hits from the 1960s would you like to see come to Rocksmith? Let us know in the comments below! (and you-know-who doesn’t count)

Yup, not sure why you’d suggest it anyway though

Because you asked “what other two songs are you hoping to see?”
Anything from the Beatles. But hey, you’re cool.

The Beatles are never coming to games again

Wild Thing -- the Troggs
For What It’s Worth -- Buffalo Springfield

I wouldn’t mind some more Stones. The Monkees would be cool too. They were as big as the Beatles.

Mamas and the Papas, Steppenwolf!

More Doors, perhaps?
Would love some more CCR as well.

Hopefully for what it’s worth!!

I was just about to say the same thing.

White Room by Cream would be very nice

Fortunate Son, The End by The Doors

Now that’s what I am talking about. ..

Hadn’t heard of them until they were used on The Simpsons, great song 😀 :

Has anyone ever been banned on the Ubisoft forum by some complete bag of ass who calls himself rcole_sooner? I wonder how p-whipped he is that he has to be a forum Nazi.

I’m hugging my guitar in preparation.

We shall see. I like the 60’s a bunch…it was like grunge round 1. Seriously so much could be in there I can not speculate. I know everyone wants doors and Hendrix. I want more Creedence, Steppenwolf, and The Byrds would be nice. Of course Cream…but if we get that I would expect them to release the earlier Clapton stuff from RS 1. It was hard to keep my console from locking up in RS 2012.

Awesome so far. Hopefully this means the doors 3 pack is coming soon. Peace frog, Maggie M’Gill, and the end. Since the great artist packs only come in a 3 song pack for some reason.

A friend passed me some early Fleetwood Mac. Did some research and found Peter Green and John McVie left the Bluesbreakers outfit, joined up with Mick Fleetwood and formed the group. Their early work is pretty interesting.

Would be nice to see Rocksmith have some early Fleetwood Mac. English Rose, Mr. Wonderful, and Then Play On are all pretty good CDs. How about something from that collection. (Already made the request)

Our next DLC will love you two times. 60s Mix coming this week! #Rocksmith2014 pic.twitter.com/pgBuMiEJIv

LF… Whatever drugs ur on can you send me some?… The majority of the dlc sucks this year!

It’s called sunshine, sobriety, and an appreciation for music. You should try it sometime!

I don’t understand the haters around here. Even though I haven’t evon come close to buying all the DLC released this year, Rocksmith has been kicking major ass on the song picks.

Cant wait to see what the other 2 are. The 60s was a great time for rock music. Keep up the good work Rocksmith.

Blue Cheer would be cool

Cream…”Sunshine of your Love” would be nice

Yes, in the original Rocksmith

If you have the original rock
smith you can play it in that game only. It will not transfer over to 2014 as legacy dlc due to licensing issues.

‘Tales of Brave Ulysses’ would be awesome.

It would also fit into an Acid Trip theme.

Would love to get Dear Mr. Fantasy. It’s been requested. Would actually like to see anything with Steve Winwood in it. Blind Faith would be awesome bcuz we would get Slow Hand too!

I enjoy playing the classics. Buffalo Springfield gets me excited about a possible Neil Young song in the future!

some old Uriah Heep would make my day
😆

I agree. Stealin’ is one of my all time favs but anything would be awesome!

I’m in no matter what. Can’t go wrong with 60’s or 70’s packs as far as I’m concerned. I’m a little bummed that “don’t you want somebody to love” wasn’t the song we got from Jefferson airplane though since i requested that one. It would have been much more fun for bass players.

Finally, been awhile since I bought a pack. If the end is in it I’ll definitely buy the whole thing. I know it’s a long shot

Would be nice to see more James Brown as well.

There is so much great music from 1969 alone. It could fill twenty of these packs. If you ask “Why?” as someone did above, you need to go back to school.

sweet!, should be a fun change-up. I hope “For what its worth 67” makes the cut. Ive wanted a documentary about Jeffersons Airplane and all its incarnations for a long time. I even like the 80s starship, which the critics love to bag on.

i thought The End by The Doors would make for a good song about ancient Rome. “lost in a Roman wilderness of pain”, but it’s probably the confusing time clue.

We need sunshine of your love back ofcourse ?