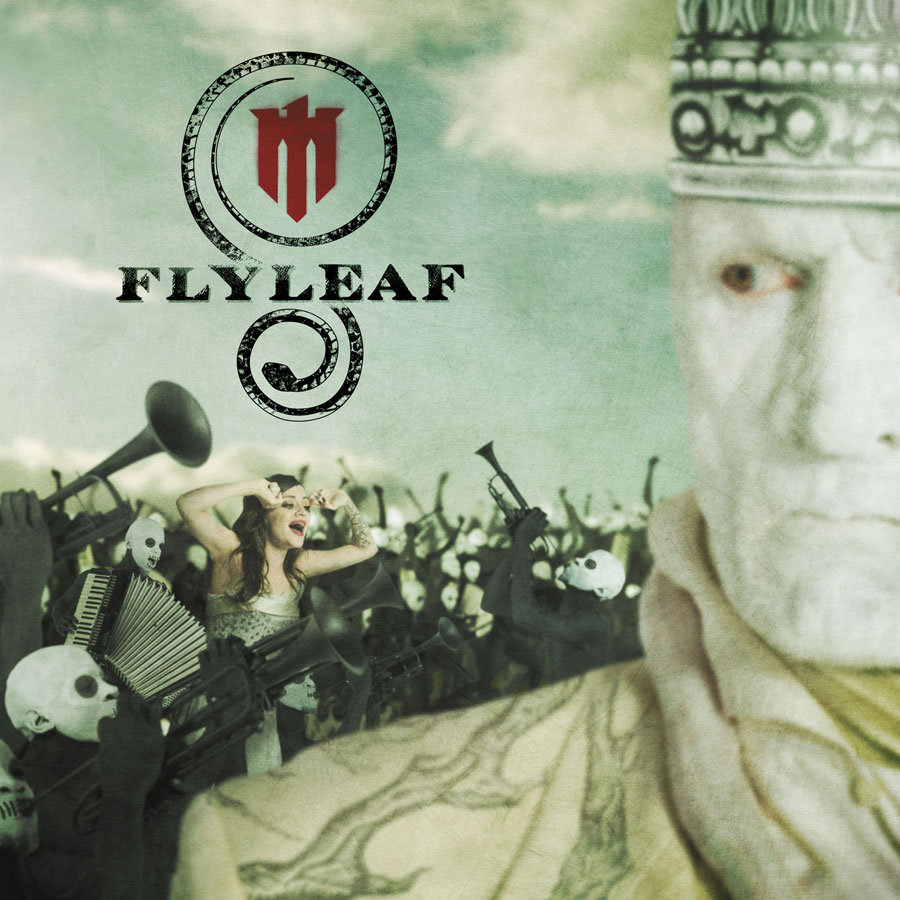 This week (as confirmed on Friday) is a four pack from Christian Metal-ish Band, Flyleaf!

Two tracks this week come from their self-titled 2005 debut Fully Alive and Cassie. From their follow up album, 2009’s Memento Mori, Again and Missing!

Does Cassie remind anyone else of System of A Down a bit? Heavy subject matter in any event.

Expand that tuning section with Flyleaf!

Are you excited for these four new songs by @flyleafmusic to play? Or is this just a bit too cookie cutter for you? Let us know!

You all wanted more chick bands… So you got one and bitch its to easy… News flash .. No chick band has a great guitar player!

Those songs were super easy

You people would complain if it was a metallica twenty pack.

Fully alive and caissie are both welcome additions to my setlist.

Strong pass. Personally, I think some more variety might be nice… I enjoyed the one Devo song we got, but more wouldn’t hurt… some more New Wave, or to be really out there, how about some of Weird Al’s original compositions? He wrote a few that he has full rights too, and he seems like he’d be open to licensing.

Dare to be Stupid. See, that’s what I’m talking about. (not suggesting that as a song BTW. Just a big Transformers fan).

Give us something different.

What the… I hope things start looking up. I’ve requested songs and bands at this point I think many of us are giving up hope seeing any from bigger rock acts.

Lol wow thanks for the garbage. Who the hell at Ubisoft thought that we would want to play Christian rock. Get your heads out of the sand and listen to the ppl

They did. Believe it or not, people requested this. That’s why it’s Rocksmith DLC. It’s a product. People at the RS Studio aren’t going “Gee, I wonder who we can piss off today? … I KNOW, let’s release some Christian rock. Everyone one will think it’s garbage!”

RS DLC is based off of requests and educational potential. Not the personal tastes of Rocksmith executives.

Pass. At this point I would be fine with just requesting bands instead of the actual songs and just hope rocksmith can get anything at all from the bands I like for dlc. Beggers can’t be choosers.

I think my little sister put it best… “Someone actually gets paid a fuck ton of money to play this simplistic shit?” Then I think of Southpark and Plus One. Yes. Yes they do.

I respect your opinion and though this is quite simplistic it is far from the worst in regards to that. Simple music doesn’t mean bad music or that the musicians aren’t talent; take Nirvana for example. However, sometimes I feel the same way as you, especially regarding pop radio where instruments have practically became non-existant. 😐

Oh, very true -- by no means did I want to imply this was the most simple on offer. And yes, you’re correct, my opinion -- I know my tastes are very different than most. But I have to disagree about Nirvana. Heart Shaped Box is more complex in the first 30 seconds than these 4 songs combined. Of course, that’s cherry picking one song for comparison, and yes a lot of their stuff sounds simple. But I did gain a bit more respect for their talent after playing their songs. And don’t get me started on pop radio…

Seems a lot of the bands they have approached so far are not really that interested in being on Rocksmith yet, or are too expensive for Rocksmith to get permission to.

On the game:
I love Rocksmith 2014 and even though I have more songs than I need I don’t want Ubisoft to ever stop making music for it. That being said I haven’t played it in a while because other new games have taken my spare time. I will always go back to it though.
On the DLC:
I don’t care if they are christian, I liked the first Flyleaf song they released so I’m gonna buy the pack to see what more they have to offer.
Stay positive and keep requesting.

P.S. I must say, I am surprised at the high percentage of people saying “nah” to this… sometimes it feels like people are waiting for a pack to vent on.

Don’t get it twisted. Nobody is waiting to vent. That happens on every pack (especially this year). You could have Zeppelin DLC and someone is going to complain that the wrong songs were chosen.

This is the first time I’ve heard Flyleaf. So far I like what I’m hearing. Not purchasing it though. Got no problem with faith based music (as evidenced by the heavy amount of gospel in my music collection). I can’t speak for everyone else, but my concern is that even with the addition of Flyleaf, the majority of DLC in 2016 still seems to hover around Metal, Alternative, and Pop rock.

Caissie and fully alive are both awesome songs and I will definitely be picking them up.

must…..play….slayer…pack…. must restore…. balance …destroyed… by this DLC

This pack isn’t my cup of tea for now, maybe in the future sometime? No complaints about DLC though, I would like to have every song downloaded one day. Why not, right? Every DLC pack is a gift.

Are the devs just doing pet projects now? There are tons of more recognizable bands/songs out there that would be infinitely more lucrative.

While I greatly applaud the addition of some Christian music, this DLC once again remains safely close to most of what Ubisoft has already released this year. I’d much rather have seen Benjamin Gate representing Christian Rock, however; my comment would remain the same. For the most part, the music this year just hasn’t gone in any new or seldom travelled directions.

Time to step out of the box Ubisoft.

Not for me. It’s been a while, 2 singles since the Crobot pack, everything else has not been my kind of thing at all. Too much late 90’s/early 2000’s for my tastes. That was one of the worst eras for music in my opinion.

Not too bad. But time for a new version of Rocksmith!
3 years ago now…
They can let it die out or finally put some effort in it.
We all deserve it!

System of a down meets cranberries. At least they are original

Why is this place rapidly becoming Asshole Central?

Other then some tweeks and changes to Rocksmith, I couldn’t imagine the next one (if that ever happens) really being that different. Would assume that would need to include some pretty big draw cards for everyone to switch over and pay for the dlc that would only work on the current version. Would assume this would need to include some of the hard to get artists like Metallica, AC/DC, etc.

I think 60 dollars for about 60 new songs is in itself a pretty good deal when they can get away selling songs for 3 dollars each.

The game has tons of room for improvment. http://forums.ubi.com/showthread.php/439984-Rocksmith-2014-Official-Gameplay-Feedback-Thread that thread has close to a 1000 post, and a lot of great ideas. As far as a Glorified tab reader it does a great job already. As far as an educational tool or trainer, that can really teach you how to play, it has a lot more work to do. My hope is that one day RS gets big enough to just go to a full online service, with just the core os being stored locally. A monthly subscription service with access to the full music library, along with a vast array of guitarcade games and trainer options. Shoot we could have a whole community, w concerts and workshops. Elliot could be head of forum community development 🙂

let me revise, as it stands, RS2014 is an incredible piece of software (not just a glorified tab reader), and the people in SF have done, and are doing an excellent job. If we get nothing more than continued support in the form of DLCs then Ill still be very grateful. There is a huge benefit to ones playing ability obtained from learning how to play songs. Ive put in close to 1200 hrs in Rocksmith, and ive become a better player because of it. That said, I see so much potential for expanding and refining the software. I remain optimistic about the communities future.

That is hilariously true!

Where is the Rolling Stones pack

Good question. I know they already have a couple tracks in the game and like some other bands I wonder where the heck the pack is! Silversun Pickups? Arctic Monkeys?? Interpol???

I saw one of their tweets quite a while ago saying The Arctic Monkeys were iffy on putting their music in digital format which made trying to get permission from them a lot more difficult.

The request app feels pointless. I have been requesting big name bands and artists for over 2 years, some with tracks already in the game, and only 2 have have been added (One single, and the Primus pack). After this amount of time without SRV, Living colour, proper packs for Bowie or The stones or Motorhead etc., it just feels like a waste of time. I requested EMF, they have great guitar parts and they were huge in the 90’s, they have not even been asked (I’m good friends with 2 of them). I wonder how many big name bands have been requested by fans, but have not even been approached?

Count me in for an EMF pack as well. I justed requested Search & Destroy, Children, and ofcourse Unbelievable. Bringing up EMF induced a early 90s flashback, so I also requested: Jesus Jones -- Right Here Right Now, Ugly Kid Joe -- Everything About You, and Walk On The Ocean by Toad The Wet Sprocket. Dont worry, no Ace of base

On the other hand two of the things you requested were added, I recall you didn’t think there would even be a second Motorhead track and you got “Killed By Death” so if anything you’ve proven that it works 🙂

Should be a fun easy pack, I’m excited. Selkies killed my guitar esteem.