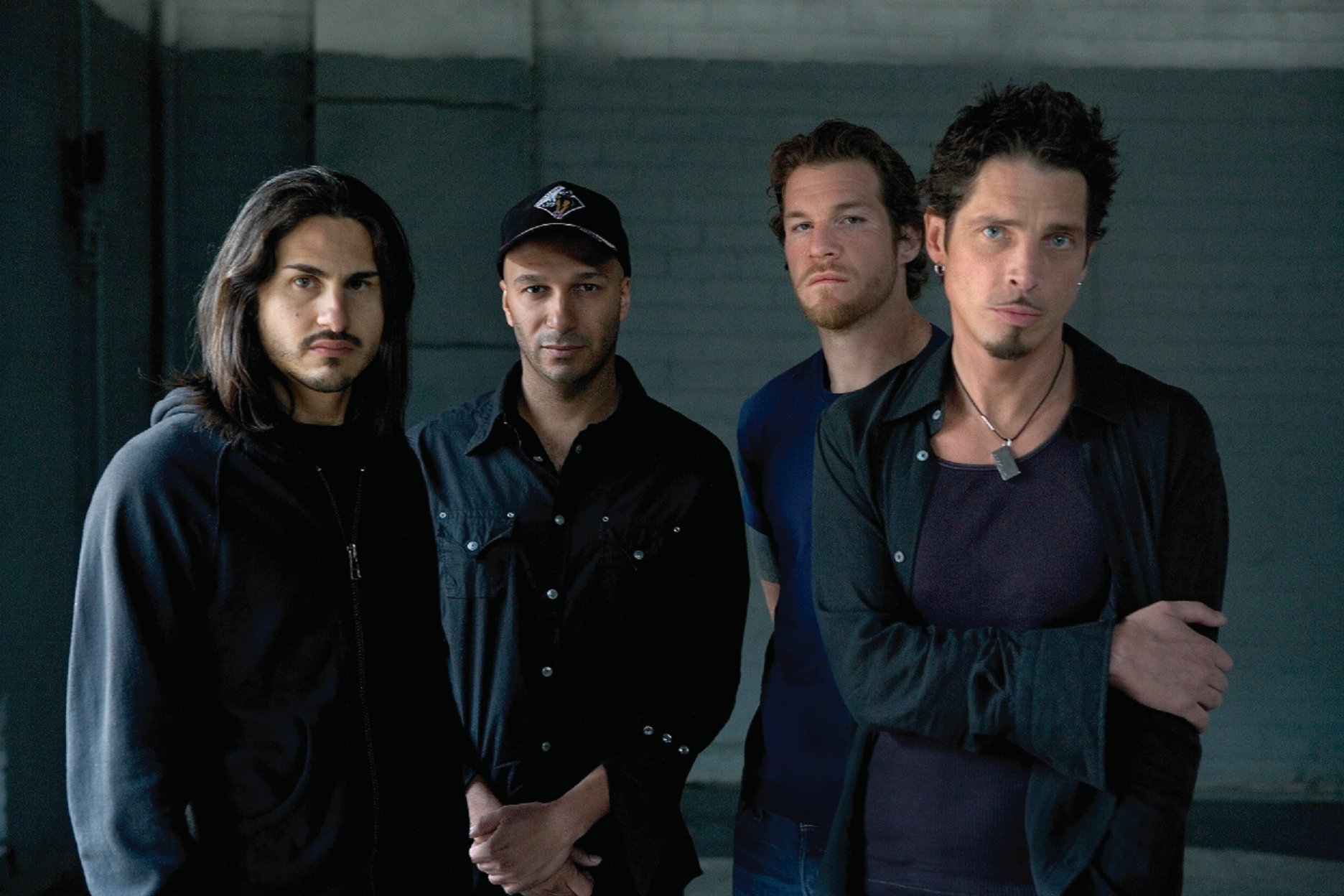 The clue has been posted and solved in less than two hours.

Dan started off by posting a encrypted clue with a link to an audio file.

The clue was decoded to the sentence

“A simple test: To open me, just find your center of gravity”

the password was therefore “v” the center of graVity!

“Yeah, real simple. Except that every cop in this city is lookin’ to bust our heads.” – Cochise, The Warriors, 1979

“It is not easy to change but sometimes it is required.” – Cochise, Broken Arrow, 1950

The operative clue here is the name of the character that speaks them, Cochise.

Yup, it’s a pack from Audioslave!

For those not familiar with Audioslave, they are a supergroup that contains the singer of Soundgarden (Chris Cornell) and Rage Against The Machine’s Guitarist (Tom Morello), Bassist (Tim Commerford) and drummer (Brad Wilk).

They only had three albums and were only a band from 2000-2007, but they definitely made their mark. Funny how we are getting this band as DLC before a proper Soundgarden pack or the highly anticipated and rumoured RATM DLC.

What other 2-4 songs can we expect next week? Here’s a few.

Can’t wait to see how they handle Morello’s effects.

Are you excited for Audioslave or is this just a tease of what’s to come? Let us know in the comments below!

That’s weird the page for the DLC (not speculation) says I am banned lol, and no other page. Weird, as I only rarely post a comment.:)

Not sure why that happens, you can message your IP and I can whitelist you to prevent it happening in the future

Somebody must know the songs by now!! *impatient* 😈 😎

Show Me How To Live has been confirmed by the FB Page.

I understand.
When you saw Chris Cornell sing Killing in the Name, it’s very painful and ridiculous.

Not sure how they will do Like a Stone. The song is played with extremely thin strings wound so tight the guitar needs to be cappoed because of the tension…

My picks would be i am the highway, like a stone, be yourself, and show me how to live. In that order.

Hell yes! Which songs? I don’t mind -- they are all awesome! Thanks to whoever pulled this off!! Insta-buy!

Cochise is confirmed, find out the other songs later on today!

It is ok. Not thrilling but ok. Cornell got a bit long in the tooth after Badmotorfinger. Ratm has limited interest for me as well. Not horrible. Not great. Just ok. May pick up a song if there is anything interesting.

I am the highway.

Wow, finally something I’m interested in buying. I’ll pick up Cochise, Gasoline, and maybe Show Me How to Live if those are the picks.

Heard of them, never listened to them, didn’t realise who they were. Looks like I’ll probably be getting this. Then buying the cd’s.

Like A Stone
Getaway Car
I Am the Highway
Revelations

i can dream, dammit

I’m hoping for these 5:
Cochise
Show Me How to Live
Your Time Has Come
Revelations
One and the Same

It hasn’t been confirmed whether this is a 3 or 5 pack yet.

After three consequent 5-packs I wouldn’t be surprised if it’s a 3-pack. And with my bad luck it will be RATM-Soundgarden-Audioslave mixed 3-pack…

I’ve always been partial to the pair of awesome songs they had in FlatOut 2… Your Time Has Come and Man or Animal. Seriously one of the best video game soundtracks ever, BTW.

This is the best DLC EVER!!

Shut up and take my money!

Awesome! I was hoping for some Soundgarden or RATM first, but this will be great for the time being.

The other four songs in my opinion should be:

I am with you on like a stone and be yourself, my fingers are crossed so hard they hurt.

Make it a ten pack! Praying for “show me how to live” and “Cochise”

Hey we’re getting some Tom Morello!

This is following a similar pattern to the Creed release. First, we get Creed sans Scott Stapp (Alter Bridge), then later we got Creed.

First we get RATM sans De La Rocha, then later we will get RATM.

maybe (in both the creed and RATM case) these are the cheaper songs to licence so they use them to gauge (based on sales) whether or not it’s worth it to buy the premium priced licences. Just speculation.

Well, that wouldn’t be unprecedented for Ubisoft. A little taste of what could come. I think that’s a wonderful idea. Now give us Angels and Airwaves DLC so we can hope for some blink-182.

F yeah. Finally something great. Sold and sold. Make it a 5 pack.

I think that rocksmith is being funny releasing Audioslave before RATM pack. Temple of the Dog or Mad Season were better supergroups to be honest from the grunge world.

I want a TOTD reunion still…

RATM would be tough for them without a wah pedal. Maybe they are are developing foot controls.

And that’s how Audioslave was created.

I would love What You Are and Doesn’t Remind Me