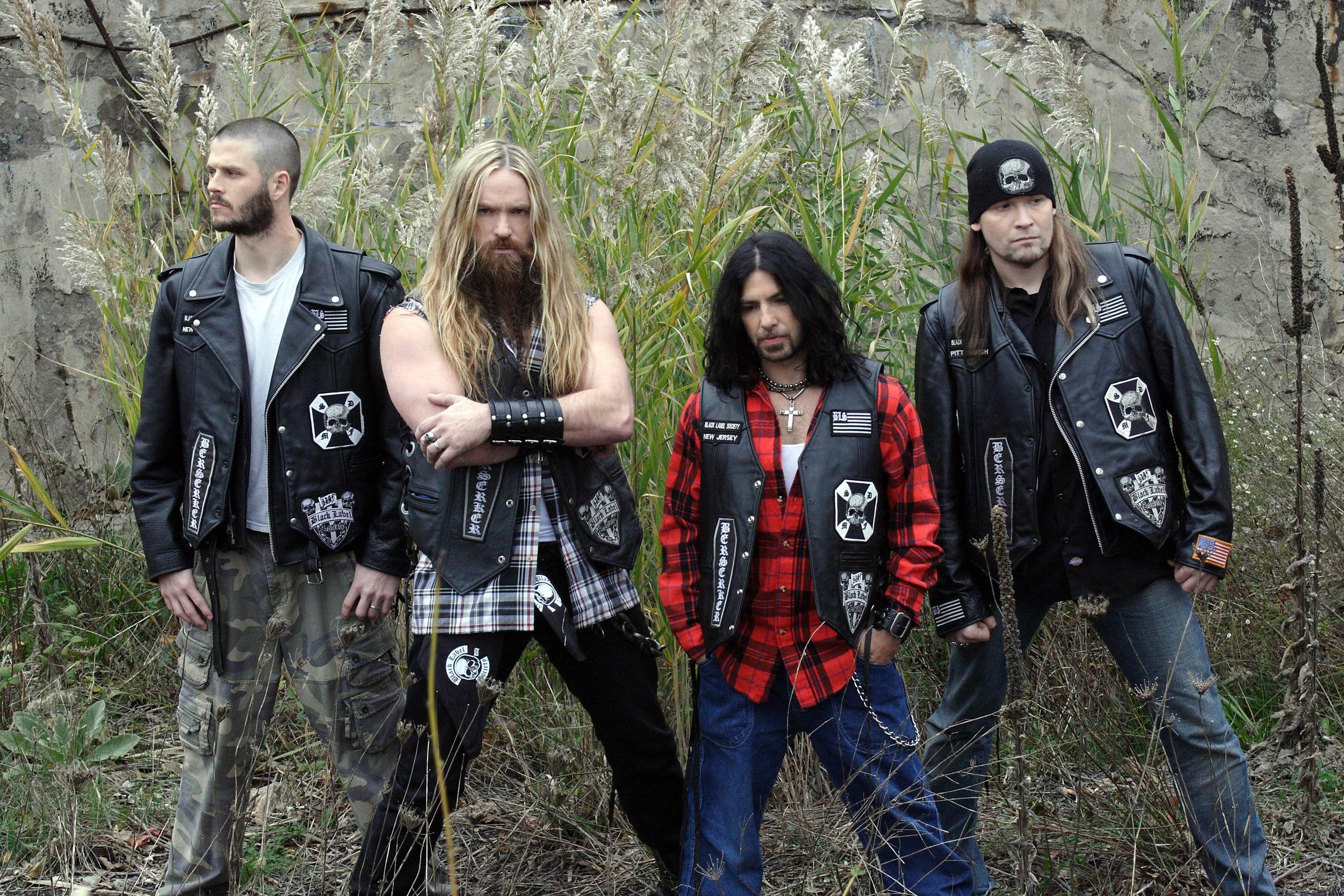 Time for some Moar Metal as this week’s clue from @DanAmrich has revealed.

This didn’t take long at all… 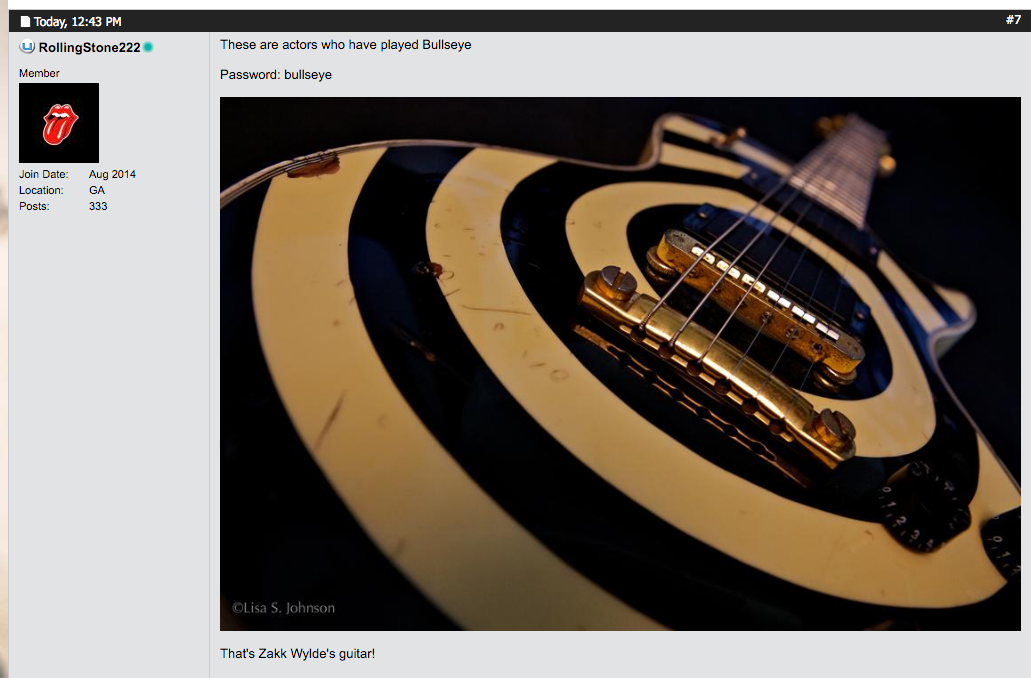 Only took 11 minutes to figure that one out!

For those who are curious the actors in the picture are:

With that said, Dan confirmed it’s a three pack from @ZakkWyldeBLS!

Zakk Wylde and Black Label Society are no strangers to music games, one of the first master tracks from a licensed artist in Guitar Hero was Fire It Up!

Later on Zakk Wylde appeared as a playable character in Guitar Hero World Tour, along with a specially made “duel song” to test your skills. Also on the setlist was Black Label Society’s song Stillborn.

Near the end of Guitar Hero Warriors of Rock’s DLC cycle there was also a Black Label Society pack featuring: Black Sunday, Crazy Horse, and Parade of The Dead.

Finally as you may have noticed from out #SetlistSunday article, Zakk Wylde was an instructor in @BandFuse and as well had a song on the main setlist, Overlord.

So what might be coming to next week’s three pack? Let’s see what Spotify says about the most listened songs… 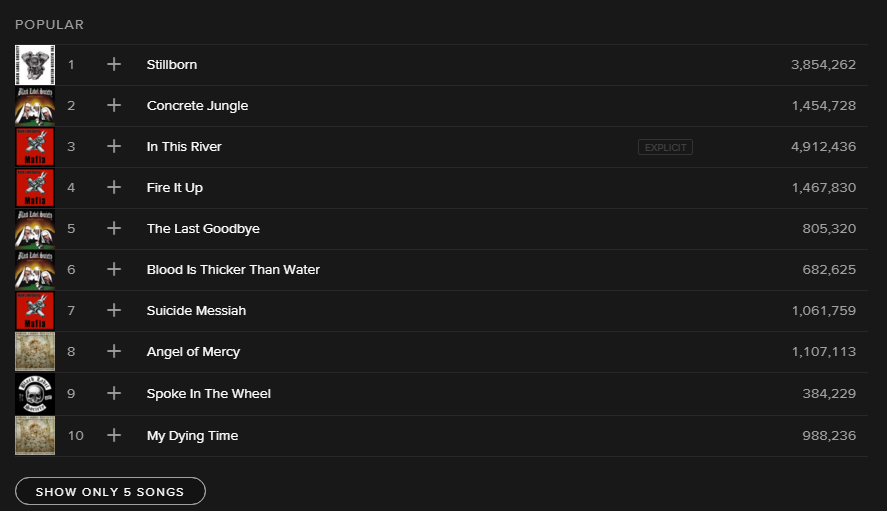 Are you happy about the addition of Black Label Society to Rocksmith 2014? Or do you really hate pinch harmonics? Let us know!

Google said Eb so that’s a bonus to not change strings.

So two of the songs are “Stillborn” and “Suicide Messiah”.

Wait, G&R reunion tour?
Please tell me this will bode well for us! I really am keeping my fingers crossed that now Dan can get us that G&R 12 pack we have been dying for!

cross your fingers,legs, arms and any other appendages but this will not happen because they will want so much money given that Axl will need all that money for therapy again

This is exciting! Zakk shreds, and I’m sure there will be a lot for me to learn from these songs. Especially practice with pinch harmonics, since he uses them constantly.

Not my favorite metal band, but still very good. I definitely will be picking up the whole thing.

SHUT THE FUCK UP AND TAKE MY FUCKING MONEY!

sorry…but i am really pumped for this!
no matter what i buy the complete pack!
now keep that stuff coming and make me poor

Well, that was a reply to the earlier post by David Morales, not sure what happened.

Anyway, excited for some BLS! ROCK ON!

“Into the Void” is by Sabbath, and “Crazy Train” is from early in Ozzy’s solo career with Randy Rhoads on guitar. While Zakk has almost certainly played both live with Ozzy at some point, both are highly unlikely in a Zakk pakk.

How does Gary Clark Jr. Only have 1 song in this game? And how about some freaking Stevie Ray Vaughn!!

How about you shut the fuck up?

LOL…why even chime in? You must live under a rock otherwise you would know that BLS is fronted by one of the best guitarists EVER Mr.Zakk Wylde. He is on the cover of the latest Guitar Center Magazine showcasing HIS OWN LINE of amps,guitars and pedals. Not a signature series…his own brand.

Don’t fret I am sure there will be another Fall Out Boy or Black Keys pack soon.

Paaassssss!… This band is ass!

13 years of Grief would be awesome!!

Excited about this pack. They’re one of those bands of whom I have long questioned the absence of in the game.

Pass for me. But grats to those who will enjoy it.

Black Label Society is a guilty pleasure of mine. While I’m not a fan of the pinch harmonics, (which to me are overused) He writes some crushing riffs. Instant buy for me. 🙂

I love/hate zakk wylde depending on the song. There is a cover of war pigs that he played guitar on and it is absolute garbage, the is a pinch harmonic like every 5 seconds.

Overlord is my wife’s fave & wishes Into The Void could be included. After all, Anything Zakk completely shreds & kicks ass. Crazy Train is a given, obviously. GI/FD. SDMF

I remember that BLS Guitar Hero dlc from years ago… that was an awesome pack. That was right before GH stopped dlc altogether (they released BLS, then Children of Bodom dlc, then dlc was done altogether) I would be fine if next week’s dlc contained those 3 songs -- I forgot how awesome Crazy Horse is. Should have requested that ages ago.

What if this is an April Fools joke and we all get a Smash Mouth DLC on tuesday?

It’s not, but that would be awesome, not gonna lie.

That would be… epic?

Dan made it clear on the Thursday Twitch stream that there would be no April Fool’s misdirection.

It would be great if it was an April Fools joke and they offered Justin Bieber DLC. Not great in that I like it, but it would be great fun seeing the reactions in the forums.