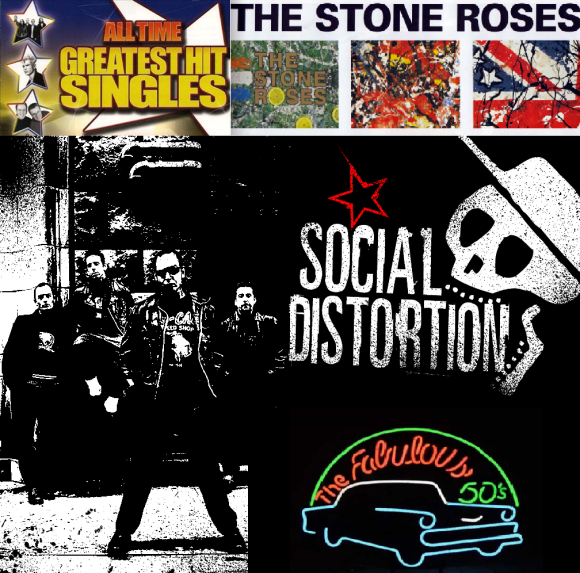 As the end of August draws near, summer finally passes us by to make way for Fall, and with it comes our monthly DLC Round-Up. Let’s have a look at some of our Guitar and Bass highlights for the month!

But first, here are the results of July’s DLC Poll: 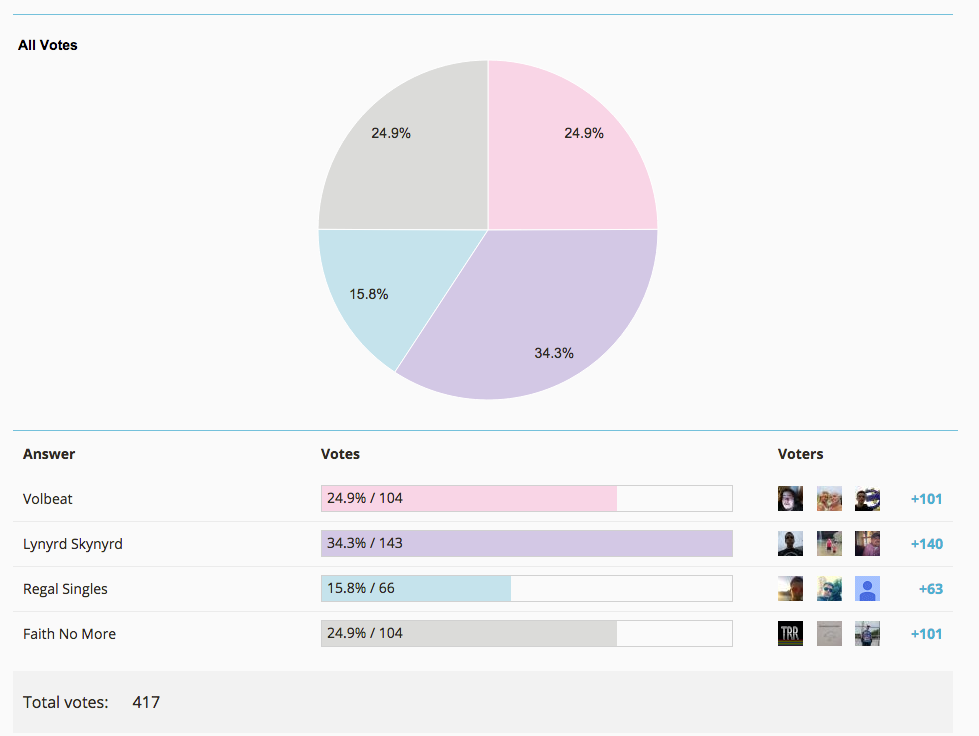 Classic rock wins out again! And is that a second place tie between Volbeat and Faith No More I see? A little disappointed not nearly as many people had quite the enthusiasm I did for Queen, Queensryche, and Stevie Wonder, though.

August was fairly light on the bass guitar front; while it was by no means a stinker month for bass, we didn’t see nearly as much low-octave baddassery as June and July treated us to. Bass highlights for the month included Rock Around The Clock (Bill Haley & His Comets), Go Your Own Way (Fleetwood Mac), Are You Gonna Be My Girl (Jet), and Love Spreads (The Stone Roses).

A fun, moderately difficult romp with some nice flourishes. Better get that pinky finger working!

Another nicely varied chart for the intermediately-skilled bassists out there.

Definitely the best bass chart of the month. A must-get if you don’t mind true-tuned D Standard.

On the guitar front, August had quite a nicely varied offering that catered to players of all skill levels; with beginner-friendly solos on Social Distortion, Go Your Own Way (Fleetwood Mac), and the Saxatar stylings of Tequila (The Champs), the shred-tastic solos on Rock Around The Clock (Bill Haley & His Comets), Rock Of Ages (Def Leppard), and The Stone Roses, and the ultimate fingerstyle challenge of Dust In The Wind (Kansas).

Can you master this solo?

Even beginners need an easy solo or two!

What do all the girlies say…?

♪And after aaaallllllll, you’re my rainbow waaaallllll♪
(On a more serious note, am I the only one who gets a massive Voodoo Child-vibe from this song?)

Get ready for some fingerstyle…

This brings one question to everyone’s minds:

I hope you’re all Dancin’ in September to this Tuesday’s Earth, Wind & Fire DLC, see you all next time!

I liked the 50’s pack, and although I like some of the songs in the other DLC packs I have no interest in learning them. Just realised it’s been 3 months with only 3 packs and 2 songs for me. But I didn’t notice really.

Hard to choose this month, loved Rock Around the Clock with it’s challenging solo (work in progress) really enjoyed Rock and Roll Queen and I’m a real Stone Roses fan too. Who knew how difficult their songs would be (locked away now practicing at 10% speed)! Well done to Rocksmith great month of fun tunes too.

Hit Singles -- Rock of Ages is terribly mediocre. Jet surprised me by being a fun song with lots of breaks for freestyling fills. Still can’t play Dust In The Wind fast enough but, it’s a great fingerpicking exercise. Fleetwood Mac is a winner on both instruments. It was terribly close between this and Stone Roses but, I think this is the more versatile pack for learning.
The Stone Roses -- Love Spreads on bass is A+, the other two are meh on bass. Versatile guitar work and the inclusion of slide is a great thing for RS.
1950’s -- easy bass but, varied at least. some alright guitar but, nothing crazy.
Social Distortion -- most boring bass since Linkin Park. boring guitar. boring solos.

1: The Stone Roses (A fun pack with fun songs, now i really want to be a door…)
2: Hit Singles (How can you go wrong with Fleetwood Mac and Kansas?)
3: 1950’s (Good ‘ol classic rockabilly)
4: Social Distortion (I’m new to them, seems nice though)

I was such a huge Stone Roses fan. I always thought “I Wanna be Adored” was a cover of The Stooges “I Wanna be Your Dog.”.

I had their albums on cassette and hadn’t looked at the song title until a few years ago when I got the iTunes version.

Stone Roses all the way.

I pretty much agree with you. I love the bassline for Go Your Own Way so much that I almost put it on top, but the Stone Roses is just an amazingly fun pack.