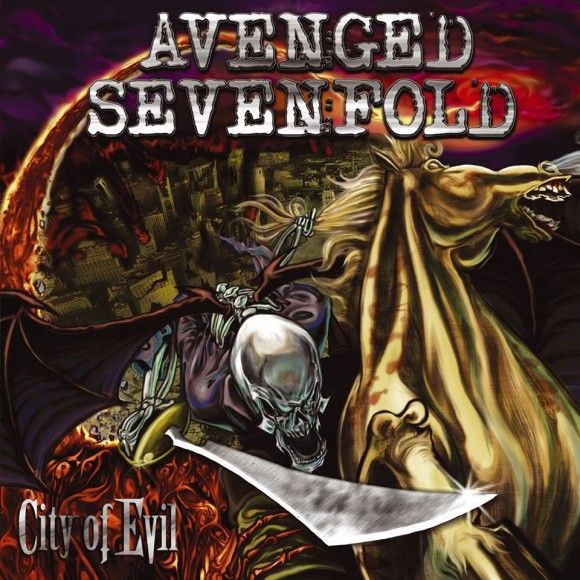 It’s another week of Rocksmith 2014 reveals! Yesterday the clue posted by Rocksmith’s facebook page definitely took me back to my trip to Las Vegas, I had the fear… 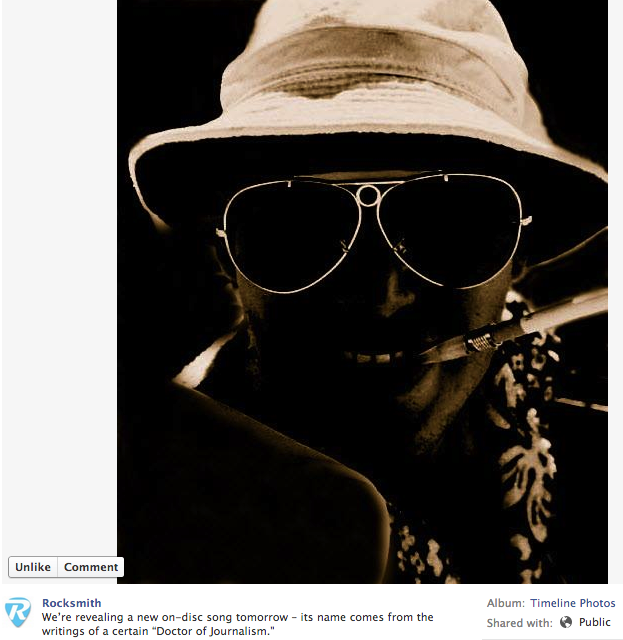 “We were somewhere around Barstow, on the edge of the desert, when the drugs began to take hold.”

Which leads us to Avenged Sevenfold’s tribute to the film and Dr. Thompson with Bat Country off their third album, City of Evil.

Avenged Sevenfold is a band with an absolutely massive fan base and fandom. Their music has always translated well to music games and of course with their DLC already being available for Rocksmith 2011, it seems like a great pick by Ubisoft SF!

Are you excited to tackle Syn’s guitar solos once again?

…if you’re 12 or don’t listen to anything outside of hard rock radio. 😕

That should’ve been a reply to Mike’s post at the bottom.

Look at you! “Theriffrepeater”. 19 comments from various Individuals.. perhaps rocksmith fans. Enough to fill an ego wide enough to not expand the outlook anywhere else away from, unless /r/rocksmith.. otherwise known as the other free advertising agency for ubisoft.

Where tweets go for reposting, and hutners sitting by water, spears in hand, for approaching fish. “Oh look!” the craftee of this tool has acknowledged my existance! In reutn, some knowledge of his I attain.

Get the fuck back to the music, guitar in hand, unplug the internet! can you do so? it’s time to perofrm on a real stage, with the crowd begging to hear an original story, and not just to witness the blantent marketing within.

P.s -- Funny story, the other day I turned to a 90’s station to hear the song “Wannabe” by the Spice Girls. I then thought to myself, and invisioend myself playing the song within rocksmith.. which notes where along the visual notation. Hours later within the subreddit toymachinesh posted the same video.

I quite enjoyed this comment, thanks for stopping by Kyle.

The next song is Wires by Red Fang.

According to this week’s hint, I predict the next song is “Brushy Brush” by Elmo.

That hint makes me think the next song will be Vampire Weekend. If so I will probably cancel my pre order because allannounced songs so far have been shite or stuff I’ve never heard off.

I know but that’s 30% of the songs man… and I’m not excited about any of them. Plus i’m too fucking old to be playing shit at +200 bpm. I preferred the songs on RS1…

Hopefully next week will be better for ya

“all anounced songs so far have been shite or stuff I’ve never heard of.” R u a metal virgin or a tweenie pop/country wannabe?

I am just pumped to see stuff that is actually guitar based with big rich riffs and challenging leads. So far the song line up for Rocksmith 2014 is way better than the original.

I agree, I want to play songs that make me grow as player and keep me interested for more than 15 minutes.

the hint from Paul Cross?

You sure? If that is the case, I will scream like a fan girl because RATM is my favorite band!!!

sorry no luck for you now it says challenging songs

It would be next to impossible to chart the kill switch/muted slide solo… Nonetheless apply it to RS since not all guitars have selectors for pickups and individual volume control. Very few RATM songs would translate to RS… *cough* bombtrack *cough*

Not a fan of the band at all but considering the recent reveals of White Zombie and Slayer I’m not in a complainin’ mood.

Why? A7X is awesome!