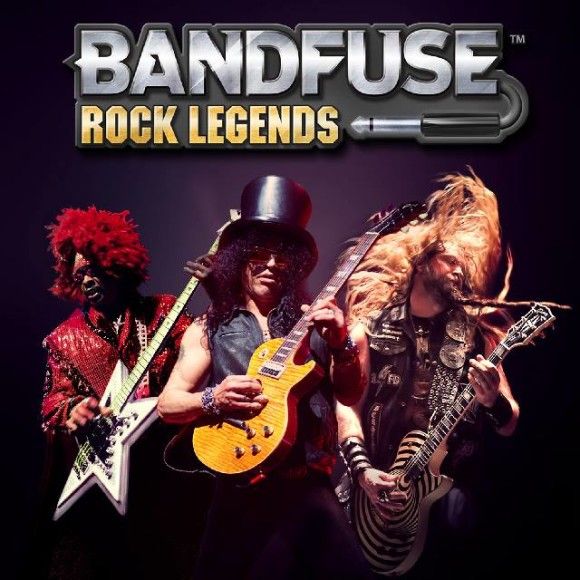 It’s been awhile since there’s been anything really to say about Realta’s entry into the Real Guitar/Bass (and now vocals) ring. On July 1st, Realta was supposed to reveal their release date, but instead it was another timeframe of “before thanksgiving 2013.”

The reaction on their Facebook page has been less than ideal and since then there hasn’t been an official posting from the page, or any employee within. However thanks to a new video courtesy of rodtoymasters and by some thorough studying of the video by elx, three new songs were revealed!

Additionally, thanks to a comment from David we were made aware of this article, which contains a photograph of a fancy, glossy information sheet regarding BandFuse. 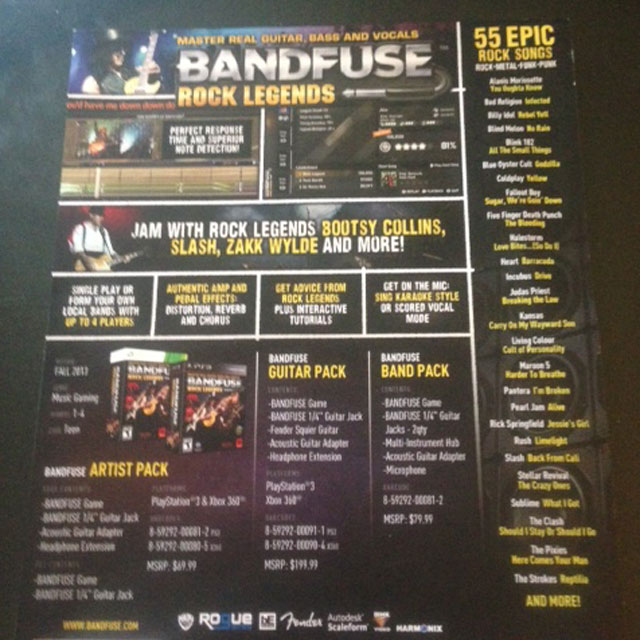 Look at that, another unannounced song!

The Pixies “Here Comes Your Man”

There also seems to be some definite info (finally) on the bundles associated with the game.

… Multiple Bandfuse packages will be available upon the game’s launch in November. The three packages are the Artist Pack, Band Pack and Guitar Pack. The Artist pack is priced at $69.99 and will feature the game, guitar jack, headphone extension and an acoustic guitar adapter. The Band pack will have the aforementioned features as well as a multiple instrument extender and a microphone, and will be priced at $79.99. Finally, the Guitar Pack will have everything from the previous two packs, and will also feature a Fender Squire guitar, and will have a price point of $199.99, making it the ideal pack for the beginner who doesn’t own one yet.

The acoustic guitar adapter (I assume) is going to be akin to the clip on Snark Tuner. I’m interested to see how that works in game.

As well, there is talk of 125 DLC songs at launch… That number seems to keep increasing with every article.

If you haven’t been paying attention to our twitter, you should also know that another celebrity instructor was confirmed for the game.

Mike Ness from Social Distortion is mentioned in the above video. Although we are unsure of his role in BandFuse one would assume that given the unannounced song, he will probably teach you to play “Story of My Life” or “I Was Wrong” 😉

We hope to have more information on BandFuse in the coming months, but for now which song are you most excited to play?

GrumpyFuse just confirmed on their forum that Lzzy was never announced to be a vocal instructor in-game, it was just a rumor.

Yeah, not sure where it came from.

In addition to being mentioned in the video, Mike Ness is also on the poster in the “Jam with Rock Legends” section, which suggests he may do more than teach you just one song.

@Dorkmaster Flek. The reason they were able to get so many famous musicians on board is because they got most if not all of them before they let this all go in the crapper.

Considering the lack of info this game has going for it so far, I’m amazed at the real musicians they’ve been able to get involved with this somehow.

Ok, yes, I’ve given up on this because of the lack of info. But I’ll still buy, just no longer wetting pants for release.

Yes, there are a LOT of repeat songs from Rocksmith, but they are just EASY or CHEAP Rights to get. But what will differ from Rocksmith and Bandfuse, is that Bandfuse is supposed to be separate or multi-tracks recordings. Meaning, turning down of off the volume to the instrument(s) you’re playing.

I buy every software I can for guitar and such, but the Notice of HARMONIX may just have given me a Booster shot. Imagine all the Multi-Tracked songs they already have rights to in the Rock Band series.

I really want this game…but don’t feel like investing…based on the PR and every other aspect to support the game. Will I be disappointed with the dlc or other functionality(aka love of it going forward?)…i don’t have cofidence that come January 2014 I will be happy!

Just don’t pre-order. Wait for it to release, see if it lives up to the expectations by reading reviews and watching youtube videos, and then decide whether you’ll get it.

I think at 1:54 on the top right corner there’s a Jimmy Eat World song? I can’t entirely tell, but it looks a bit like the cover for Futures

BandFuse is looking good but I don’t have any real faith in the publisher and devs to knock one out of the park. Rocksmith isn’t perfect but it really was the first game of its kind so it’s easy to forgive most of its issues.

Bandfuse has to compete against a now-competent Rocksmith team. And Ubisoft seems to be fully supporting RS 2014 which is good for everyone (except for U-Play and DRM, I guess).

I want to get excited about BandFuse but I think we really need some more promotional vids. I’d really like to see first impression videos/testimonials of BandFuse by Rocksmith fans, gamers, and musicians. Mastiff has to throw some money at this thing -- right now, they’re leaving Realta kinda high ‘n dry.

As it stands, RS 2014 looks like a better product (though I’ll be buying any/all guitar games to justify getting a new Gibson LPS sometime in the next year).

Definitely agree. Gonna be hard for Bandfuse to compete outright with RS 2014 “Session Mode”. Not crazy about the tab style screen either. Also, when is a keyboard going to be compatible? Seems like that would be the easiest instrument to start with in the first place.

So more songs that I already have on RS and an okay CoB song?

This is looking less and less like a good buy. Here’s to hoping that 125 DLC tracks isn’t an over exaggeration.