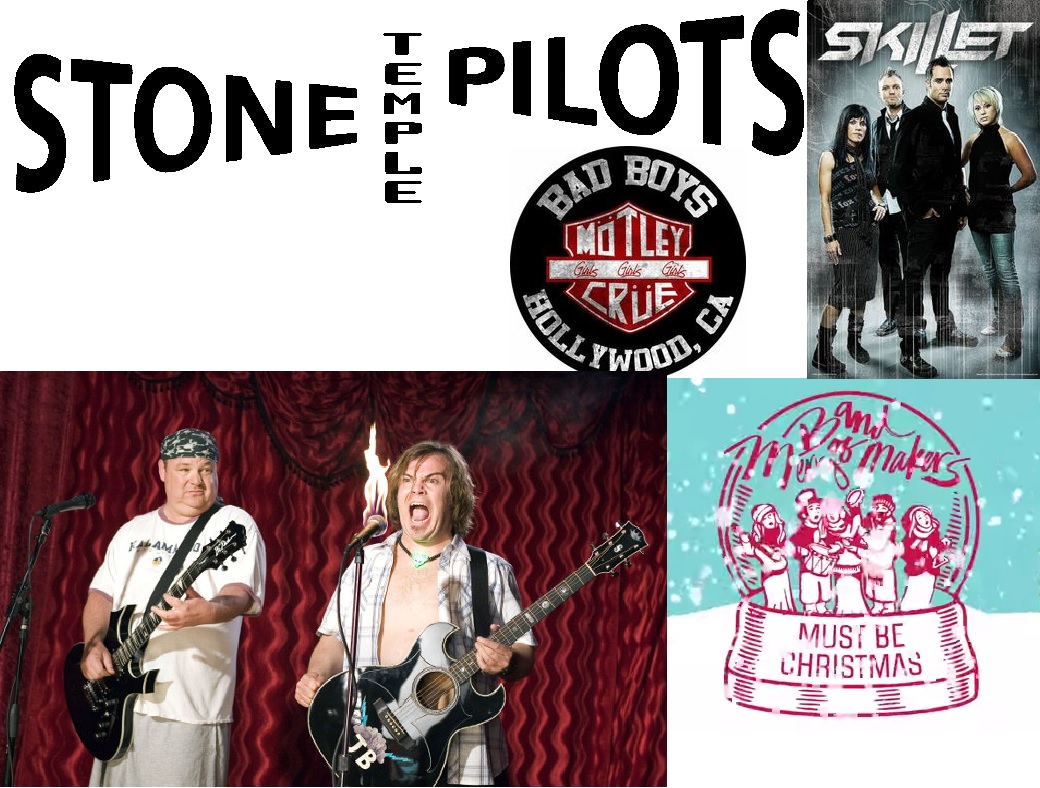 I hope your holidays were as merry as can be! Now that the weekly DLC has finished for the year, let’s take a look back at the gifts @UbisoftStudioSF has lovingly given us for the month of December.

Firstly, here are the results of November’s DLC poll: 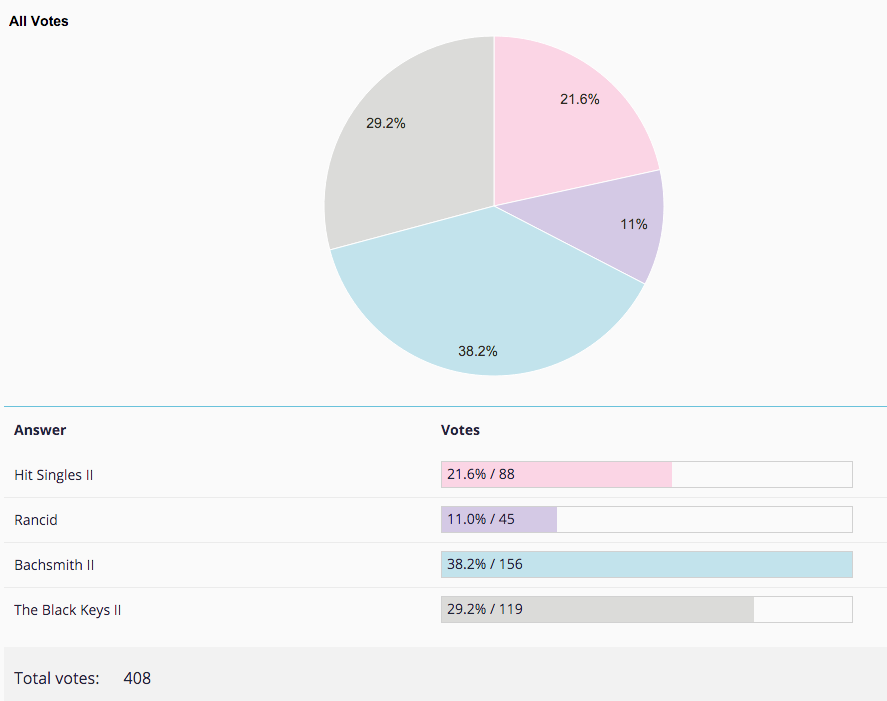 Unsurprisingly, Bachsmith wins out for a second time. Second packs of both Black Keys and Hit Singles proved to be quite popular, and it looks like Rancid‘s challenging basslines might be a bit too intense for most players.

This month was full of heavily requested bands, with the double-release of near-constantly requested (on the Facebook page, at least) Christian metal/post-grunge band Skillet and two singles from Christmas-themed charity supergroup Band of Merrymakers, the intensely popular comedy rock duo Tenacious D, a top 40 request in the form of hair metal icons Mötley Crüe, and the unfortunately timed but well-worth playing grunge icons Stone Temple Pilots to close out the year.

Bassits might not have had quite as many excellent basslines this month as November gave us, but the month was not without some standouts, especially in the form of Stone Temple Pilots’ unconventional blend of grunge with harmonic variety and groove courtesy of bass guitarist Robert DeLeo.

Betcha didn’t expect a grunge band would have this much harmonic variety.

If you listen closely, Interstate Love Song’s bass sounds more like a reggae bassline than most grunge.

Lots of chromatic walks in this one.

Crüe are a pop-metal band first and foremost, but A fair number of slides and octaves give Dr. Feelgood a nice bit of playability.

Guitarists were in for quite a treat this month; with the shredding solos of Tenacious D and Crüe, the heavy riffs of Skillet, the unconventional atonality and variety of Stone Temple Pilots, and the beginner-friendly acoustic jams of Band of Merrymakers, there was something for every skill level this month.

A killer riff and a very challenging arpeggio section.

A short but very sweet solo in this one.

A delightfully merry song for beginners.

While E standard remains the undisputed champion of tunings, December gave us a fair amount of variety with the downtuning of Mötley Crüe and Skillet.

Which brings us to the usual question:

Wow if that’s the list of possible and probably 2016 is gonna be a long sad year! 😕

Who knows? Just wait and see, Ubisoft SF might surprise us with something…

1) When is the weekly DLC expected to start again?

2) If I’m counting correctly, from the Top 40 Most Requested Artists, do we now have 17 artists who have yet to make an appearance on Rocksmith?

3) Will Riff Repeater to a poll on what artists everyone hopes to see in 2016? (just curious--thought it would be fun)

3) No, that just happens in our comments anyway but if you are interested in artists hinted at by Ubisoft employees…

Hey UBISOFT (if you’re listening) while everyone is all cheery and chipper, you may want to jump on that G’N’R DLC before the pending imploshion 2.0.

Thanks for posting the reddit link Elliott. I feel John Petrucci’s Dream Theater is sorely needed in our library. He’s arguably one of the top technical players alive. As it stands we only have 1 song each from Satriani, Vai, Eric Johnson and nothing from Yngwie Malmsteen. Our library is just a little thin at the top end. Other artist on that list that Id be excited to see are Dire Straits, J.G.Band, Tool or Perfect Circle and as much fuss as it would make, John Mayer, who beyond being a tabloid regular, is actually an excellent guitarist.

How the hell did the black keys and bachsmith beat out hit singles II in the November poll? Kind of scary I share a fanbase with those people who voted against it.

Lol, I wondered the same thing. I liked bachsmith but it was number two for me.

The voting for best dlc of 2015 will begin on Friday

Hopefully there will be a Neil Young pack in 2016??
1-Rockin in the Free World
2-Down by the River
3-Hurricane…. Just for starters.?

I don’t get why anyone would need rocksmith to teach them the simple acoustic stuff in neil young songs. I like a lot of his stuff, but really, learn 3 or 4 major chords and how to solo on one bending note, and you’ve got the majority of his catalog.

I like Neil young but as a bass player I’d rather see a dlc slot go to something a little more challenging or at least groovy, lol. I Would prefer something like Crosby stills and Nash’s “wooden ships”.

…and please rocksmith, no Justin bieber or one direction dlc in 2016 or I’ll have to eat a shit sandwich on rye. ?

First off, I’d like to applaud Ubisoft for branching out this year. In 2015 we saw the usual metal, rock, alternative, and classic rock. They added to this, blues, funk, pop, and finally some country. And this month we finally saw a little bit of Christian music.

For December’s DLC, I like Motley Crue. Unfortunately, they have two strikes against them--retuning and a 5 pack. Not having to retune (nothing against it, if that is how the original release was recorded) and a 6pack vs a 5 pack moves STP to the top for me.

1) STP 2) Crue 3) the D 4) everything else. Thanks rocksmith for another great year of dlc.

1. Stone Temple Pilotsat, it was the only pack that I could say I REALLY Enjoyed. Oh and R.I.P. Scott Weiland.

2. Tenacious D, I didn’t know anything about this band except for Beelzeboss. But now that I’ve actually listened to it, I really liked it.

3. Skillet\Band Of Merrymakers, While I don’t like Skillet, the Merrymakers songs were really good. Though nothing I would get my hopes up for.

4. Mötley Crüe, I hate 80’s glam\hair metal. They saved the Biggest nope of the year for the end. I thought I was pissed off with that one Subways song. But that is nothing compared to this cheesy 80’s S***-fest. The good thing about this pack is that (hopefully) We’ll never see Mötley Crüe again.

I am Sam
Reply to  YYZ

I liked STP best. I have really wanted that dlc for a long time. Other than that I bought all the dlc for the month but I am not especially emotionally tied to any of it. Jack Black is kind of funny, but like Skrapp Mettle, Spinal Tap and Gwar…if it is done for a joke I usually take it as one. I am glad I bought TD but…it is the bottom of my list. I really thought Band of Merrymakers was fun. Thanks RS crew. Looking forward to some new stuff in January.

First, Allow me a moment to thank the crew at Rocksmith for a great year of dlc’s and streams. I have books and books of tabs, and other software I use regularly, but nothing really compares to rocksmith for practicing along to real tracks with live feedback. Im looking forward to another great year of dlc’s. Thanks, and keep ’em comming.

Thanks. Will pass this along. 🙂

Before I go onto break this months DLC down for myself, I would like to say that EVERY pack in this month had one big problem… the tones. RS acoustic simulation sucks so badly and every pack had at least one song with an acoustic tone. They are so loud that they ruin the experience for me… I know I’m playing the songs right but the dynamics between distortion and acoustic are so out of whack that these songs will never sound good when performing via RS. Anyway… I went with STP. They had fun charts on each path. No crazy solos (was hoping for Trippin’ on a Hole for that) but lots of unconventional riffs/chords. Plus, aside from Sex Type Thing, I really enjoy all the songs as a listener. Finally, STP will always be somewhat special to me because the first riff that I ever learnedwas the main riff in Interstate Love Song. Next goes to Motley Crue. Some fun leads and the more metal riffs are a lot of fun (Dr. Feelgood / Kickstart My Heart). Bass is meh. I actually prefer the Tenacious D songs to play but, the acoustic tones in every song ruin the pack for me. Crue just has acoustic on Home Sweet Home so, I chose this pack over the D because I’m more likely to play these ones without acoustic tones… it bothers me that much. Third, Tenacious D. Bass is underwhelming. Leads on Master Exploder and arpeggios on The Metal are so fast, I doubt I’ll ever be able to play them cleanly. Tones are god awful. I like the songs but, don’t see a lot of replay value between the required skill and dreadful tones. Fourth, Skillet. Boring band with remedial basslines, yawn-fest lead charts, cringe-worthy lyrics and nu-metal… Read more »

I have definitely noticed the issue with acoustic tones as well, but after messing with the settings on my stereo it is much better. I run optical from an X1 to a Marantz stereo, and originally the volume of the acoustic tones was so loud. Can’t remember what I changed in the audio settings, but it sure made a difference.

The Crue was the best with STP a close 2nd….and the others not even in the ball park… Hope they start of the new year with a Neil Young pack??!!

1. Motley crue: loved that pack. Just a bit disappointed with the lack of Saints of Los Angeles.
2. STP: I passed on it, but was still a good pack for the fan and 3 of the songs I will purchase at some point.
3. Tenacious D: I passed on it, mainly due to the awful inclusion of tribute. Master exploder is okay and I already know how to play The metal. Could’ve been a great pack with better songs.
4. Skillet: I passed on it, I like them but their riffs are too basic to warrant a purchase and the song choices weren’t great.
5. Band of merry makers: I passed on it, no replay value after the holiday season and not a whole lot to learn from those 2.

I would like to add in that people wouldn’t have known how challenging the bass lines from Rancid are to not vote for them because no one bought it, I’m sure people requested it but I suspect that was either a prank or drunken nostalgia

Worth at least for the only ska song in 5 years… but also you have to play it differently than displayed in the game or you’re gonna have a bad time with it.

‘shaaa, pizza when you should’ve french fried and you’re gonna have a bad time.

Bought it and love it. It was my pack for the year 🙂