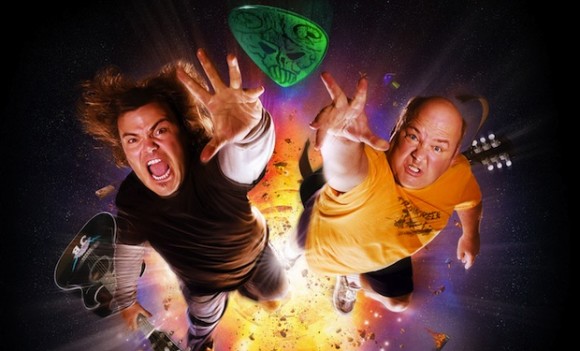 This week’s DLC comes to us from the greatest comedy metal band that wasn’t already featured in Rocksmith (because we got a Spinal Tap pack back in March), @RealTenaciousD! It’s not very often we can say this, but WE NAILED IT! We correctly predicted all three songs that make up this week’s pack. That means that we’ll be seeing first, from their 2001 self-titled debut, the legendary track Tribute. Rounding out the pack are two songs from their 2006 film The Pick of Destiny, The Metal (surely satisfying the “something metal” hint from this month’s newsletter) and the truly amazing Master Exploder (of which I always joked I could play on a real guitar. Now I can make that a reality.)

Do you think this is the greatest and best DLC pack of all time, or would you rather Rocksmith rock you a bit more… gently? Let us know in the comments!

Wish it had wonderboy and explosivo.

very enjoyable and challenging pack. Welcome addition to the library

I like to play through my amp while using the game as a backing track, but I have to keep adjusting the repeater to keep the difficulty all the way up. So a way to “play live” cause that lag on x box one even with the right setup is god awful.
I have since switched to PC so much better.

Play within riff repeater with level up switched off. Problem solved 🙂

You seem to be in the know on most things RS. Any chance of the original guitarcade becoming a download option for RS2014 in the future? Dawn of the chordead is pretty good. Thanks for the reply

Thanks, I was always kind of wondering.

You cant make everyone happy at the same time. But you can piss everyone off. I applaud RS for all it done so far thanks for another great effort I do enjoy the metal.

they should have done a comedy rock pack with Ween, Peter Lynch , Flight of the Conchords and Tenacious D. I think one song from each is enough for the flavor

That song is so great, thanks for reminding me of it

Love td… Like 10 yrs ago when they did little skits on mtv… But not dlc I’d be will to spend any kind of money on!… Maybe next week we can get some good stuff.. I won’t hold my breath.

Fun pack but I’m sorry rocksmith, tribute was the last song I’ll be buying that’s not in E standard tuning for bass. I thought it was just me for over a year but I’ve tried four basses, different strings and even with the active basses (which did help a lot) note detection for me below the low E is sketchy. If it says i broke my streak while im chugging along nicely on an open E (D) working on a full count one more time I’m gonna stick my bass through the tv. ?

Wait you care about your streak in rocksmith? This isn’t guitar hero, care about how you sound not your score! (But do whatever you want cause it doesn’t really matter anyway :P)

Definitely not my thing at all. Just don’t find them funny. If we were going for goofy comedy rock, I would’ve preferred something like Ween or The Dead Milkmen. Looks like a lot of people do like Tenacious D, though, so that’s nice.

It’s good but what about some Ween?

Mixing on Tribute is awful. Can barely hear the song over the crowd. Needs a bit of patching to up the volume.

Does it just need a little studio engineering, my hard-rocking amigo?

Crowd? Does anyone actually keep the sound effects on?

I now feel stupid for never turning off the sound effects. I always found them annoying and unnecessary. Will definitely turn them off next time I’m playing.

I’ll be buying this pack despite its lack of a Cleveland steamer. Rock your socks!

So far this pack isn’t showing up on my PS4 downloadable content. Anyone with a PS4 able to find Tenacious D?

Not showing on PSN at all ( I’m on PS3)
Looks like Sony dropped the ball on the update today. About half the stuff for today not showing up.
/sigh

I’m on ps3 and two days later I still can’t buy the pack thanks to the psn store. Ty Sony.

Good stuff. Glad to see that none of the song choices had to face much censorship. I’m in for the whole thing.

On an unrelated note, whoever you have playing the demo of Master Exploder has terrible rhythm. He lost pace with the tempo like a dozen times during that main riff.

Not always can someone get a song perfect the first time playing it. Internet standards…

I don’t really own the equipment needed to make videos, but I’ll let you know when I start.

Not bad at all. Most interesting DLC for me in a while.

I can’t wait to see the complaints on here LOL! I remember how controversial the Sublime DLC was (which I would like more of).

Take my money. Would have gone for a 5 pack.

Been doing c*** push ups all weekend to prepare for The Metal.

beelzeboss needs to be on this, I’m gutted 🙁

Love the song but I feel like it would be ruined due to the whole censorship thing.

Oooh.. This DLC is kinda… juicy

This pack looks great but I am disappointed the “something metal” hint was not more maiden or priest.

Johnny on the Spot

Innovative and I'm Made of Rubber

The is the greatest and best DLC in the world