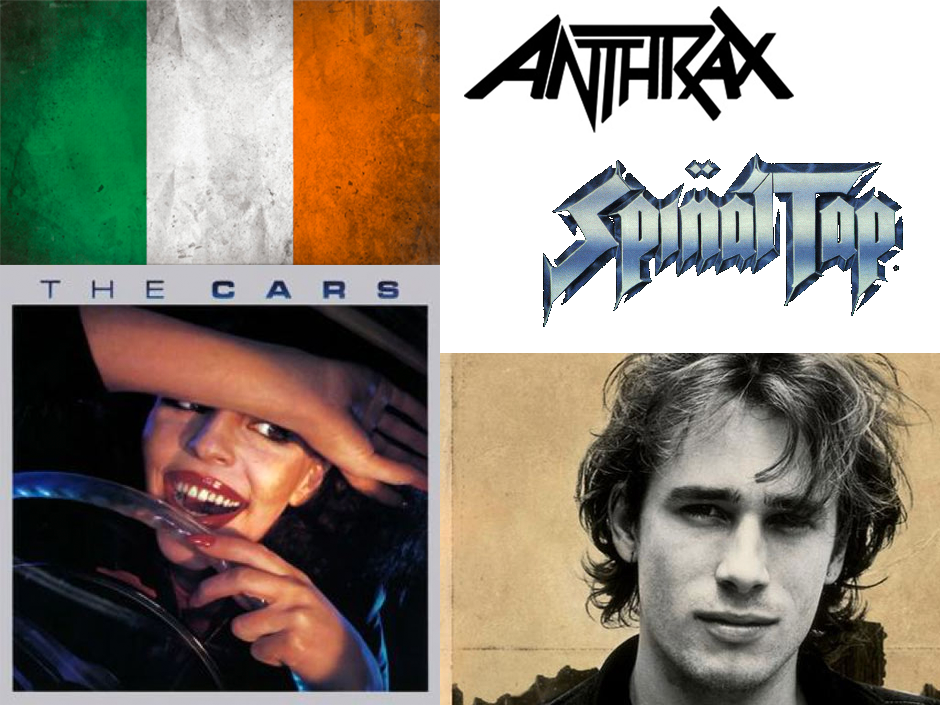 Another DLC month has ended and with it comes the DLC Round-Up!

Wow, What a month it was!

A five week DLC month is always appreciated, but this one was really knocked out of the park in terms of variety! It began with a five pack from new-wave legends The Cars, then the debut of the late and often overlooked Jeff Buckley on music games (or video games for that matter), We celebrated St. Patrick’s Day with a 5 Pack of singles via The Shamrock Song Pack, Thrashed with four songs from @Anthrax, and to close out the month for April Fools we got five songs from innuendo laden Spinal Tap!

Before we check out this fantastic month of DLC let’s look back at the results of last month’s poll:

Variety wins once again, or maybe it was just Boston…

This month had a lot to offer for everyone but with Anthrax’s inclusion, you know that bassists were happy. Punk fuelled bass from Stiff Little Fingers, the unexpected complexity of Jeff Buckley, The syncopation of The Cars. and of course who can leave out Big Bottom by Spinal Tap!

Here’s a look at some of the top bass arrangements of March!

Not a bassists lullaby

There’s a lot going on here!

Got the time to master the bass solo in this track?

That’s not to say Guitarists were left out this month as there were some tasty solos from Anthrax (Caught In A Mosh), The Cars (You’re All I’ve Got Tonight), and Spinal Tap (Mandolin Solo!).

What a perfect solo

But their legacy remains

Time to learn to fingerpick

… And of course we finally got Zombie

Besides the BRUTAL drop tunings of @JeffBuckley, March was an all E Standard month! Check it out

Which brings us to the most difficult question this month…

See you next week 😉

People got way too excited for buckley.

Yeah, people got way too excited about an artist they enjoy. Keep that in mind when someone you enjoy gets released in the coming months.

Amazing overall month. Had to stick to my metal roots and go Anthrax although I feel guilty about not going with Spinal Tap, but ‘Got The Time’ is just to much damn fun to play. I didn’t know of The Cars before the frenzy around them being release but there songs are good fun to play and I love the processed sounds. Buckley is Buckley and I enjoyed most of the Irish Pack; for some reason I love playing the Villagers song.

If you didn’t like this month you are just a miserable git.

I’m from the UK so I don’t understand this thing about The Cars at all (I listened, they didn’t sound very good to me, quite boring in fact, especially for guitar, they sounded like a keyboard band -- just my opinion, not a statement of fact!), but I loved the Anthrax, Buckley and Spinal Tap packs. They were awesome to play.

Yeah? Well I hope you get your anthrax then…

Yo, I’m pretty there’s an Alt Lead Arrangement for Caught In A Mosh 🙂
Great article, as always, thanks RR!

I thought this was one of the worst months in a very long time. I may eventually buy one Cars song, maybe the Boston song due to the Sam Adams commercials … and maybe … the Stonehenge song for the mandolin solo only. Pop/rock from the cars. Buckley who? Anthrax may be categorized as part of the big 4 … but they’re a distant 4th imo. Irish blah… and a fictitious/parody band from a mockumentary? May have been a pleasant, out of the box, offering for others, but not for me.

Well you should know who Jeff Buckley is by now, right?

fair point Toy. I was introduced for sure to Buckely this month. And while I absolutely do not enjoy his music, I do appreciate his playing ability. Likewise the Irish pack was almost all new artists to me. Again, not a fan of the songs .. but I d appreciate learning of musicians/bands unfamiliar to me.

Spinal Tap’s lyrics and novelty outweighs a You Might Think-free Cars Pack and Zombie. It was a fun month!

hmmm… seeing as I haven’t bought Spinal Tap yet, it has to be Buckley.

oh but the Cars… this is a hard choice to make.

This week I only got Anthrax this month.

Tap all the way, especially since they were the original versions and not the re-records that Rock Band got.

Cars then Spinal Tap for me. Although Spinal Tap was more of a novelty for me, but fun. Anthrax “I’m the man” is the only song I know by them and the only song I’d buy. So 3 of 5 skipped weeks last month. Buckley? ZZzz,,

Classic rock fan, had to go with The Cars (been waiting for these since RS1!). But a pretty decent month overall. I wasn’t familiar with any of the particular songs from the Shamrock pack except for Zombie, but they were fun to discover. “Alternative Ulster” is a new favorite.

My mates, obviously Anthrax is our saviour this month, and Jeff Buckley is second.