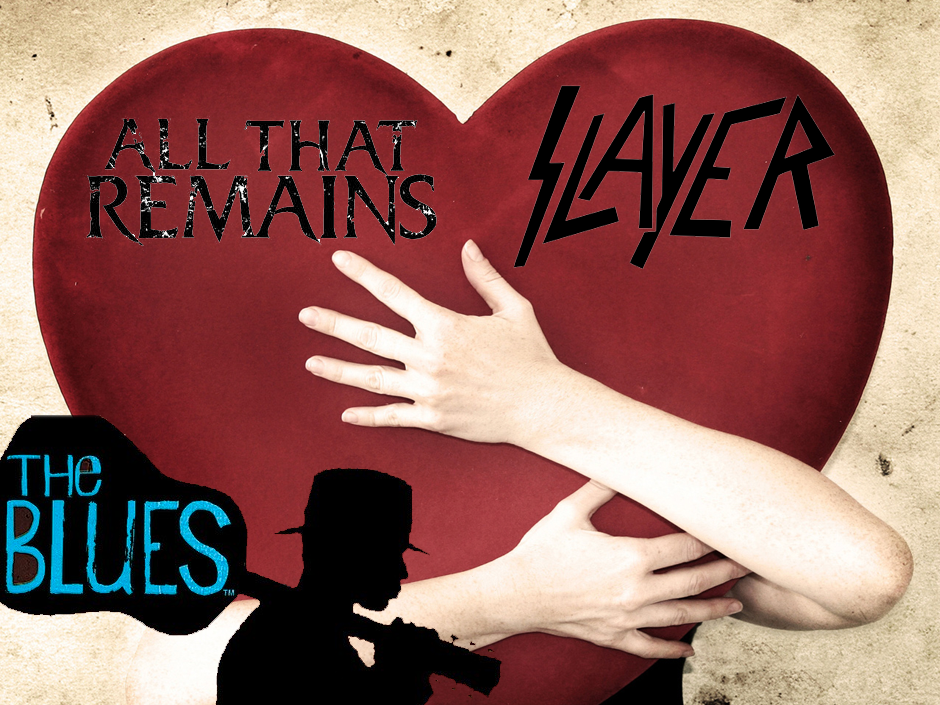 As the close to yet another month of Rocksmith DLC rolls around, let’s take a look back at the DLC offerings of May; it’s time for a DLC Round-Up!

But first, here are the results from April’s DLC poll:

Just goes to show, nothing can beat the power of good old Rock.

May was quite a metal-centric month, thanks in no small part to having only 4 weeks of DLC to work with and the presence of two metal DLC packs in a row: melodic metalcore band All That Remains and thrash metal icons Slayer. Blues fans got a great start to the month with a mixed bag of several blues icons including Freddie King, Howlin’ Wolf, and John Lee Hooker. Closing off May DLC, we were given probably the most unusual mixed song pack in all of Rocksmith DLC; all dealing with the common theme of love.

Bass guitarists should be pleasantly surprised at the hidden complexity in many of the basslines this month; the soulful rhythms of Bobby Blue Band’s Ain’ no Love in the Heart of the City and Bill Withers’ Lovely Day, the unexpected bass chords of Johnny Winters’ Be Careful With a Fool, and the brisk tempos and dissonant scale structures of Slayer gave bass enthusiasts plenty to get excited over this month.

Be careful with those bass chords…

Guitarists were in for quite a challenge this month; from old-timey blues favorites like Hide Away and Be Careful with a Fool to the fast soloing of thrash and melodic hardcore metal like Raining Blood and Six to Steve Vai’s instrumental progressive metal masterpiece For The Love of God, challenge-seekers had quite a lot to play.

Hardest song in all of Rocksmith? That honor still goes to Satch Boogie for me, but this will certainly give advanced players a real challenge.

The blues may have a simple structure, but this song is anything but.

Of course, if you prefer simpler chords and rhythmic arrangements, this month had quite a selection for beginners and intermediate players.

For those looking for a song with more interesting jazz chords.

For those looking for an easy beginner’s blues riff.

On the subject of tunings, this month saw a more balanced array with the presence of the Eb-tuned Slayer and the D and C#- tuned All That Remains.

E Standard still ends up on top, though.

Which brings one question to everyone’s mind:

See you all next month!

The cure for me or Alternative Ulster

For anyone who loves the blues, or simply enjoys tracing the history of America music “Martin Scorsese Presents The Blues” is an amazing 7 disc collection that covers the history of the blues back to Charlie Patton, Son House and Robert Johnson up through the British Invasion, Ray Charles, and everything current as of the early 2000s when the collection was produced.

Thanks, I try to make the images a bit interesting for these Round-Up articles

Got to give it to the Blues Pack. First off, the majority of the artists who currently are, and ever will be DLC on RS started off learning some portion of the blues. Blues and classical just happen to be common starting points for many guitarists. And looking at what DLC received the most comments on Riff Repeater, it seems the blues has been the most enjoyed or simply talked about in 2015.

And with all of that, for me, it’s been the only DLC I’ve wanted to spend money on all year. That’s not to berate any of the other music this year. I liked many of those songs--just not enough to want to play them. This pack was the only one that was hard to resist.

It’s a tie or me between Slayer and the Blues pack. I ultimately picked the Blues pack because I’ve really been enjoying the blues side of things this month. Slayer is a must own for anyone that is a fan, even from a casual standpoint. Crazy fast but so heavy and these songs last decade after decade.

Slayer -- because it’s fucking Slayer… seriously though, just a perfect collection of classic thrash tunes. Standout Track: “Angel of Death” (controversy schmontroversy -- this solo is incredibly hard… I still haven’t gotten a HSA pass!)
Blues Pack -- this would be my #1 but some of the songs were a bit too easy (Boom Boom, AIn’t No Love…). Standout Track: Johnny Winter -- “Be Careful With A Fool” (what a hand mangler this one was!)
Love Singles -- All the songs are fun on lead. I am required to go buy a whammy bar for my Ibanez so I can attempt “For The Love of God” with the right approach. Standout Track: The Cure -- “Friday I’m In Love” (not super hard but great practice for arpeggios)
ATR -- Fuck this band.

My pick is the blues song pack, but my favorite song of the month has to be Lovely Day. Such a good bassline.