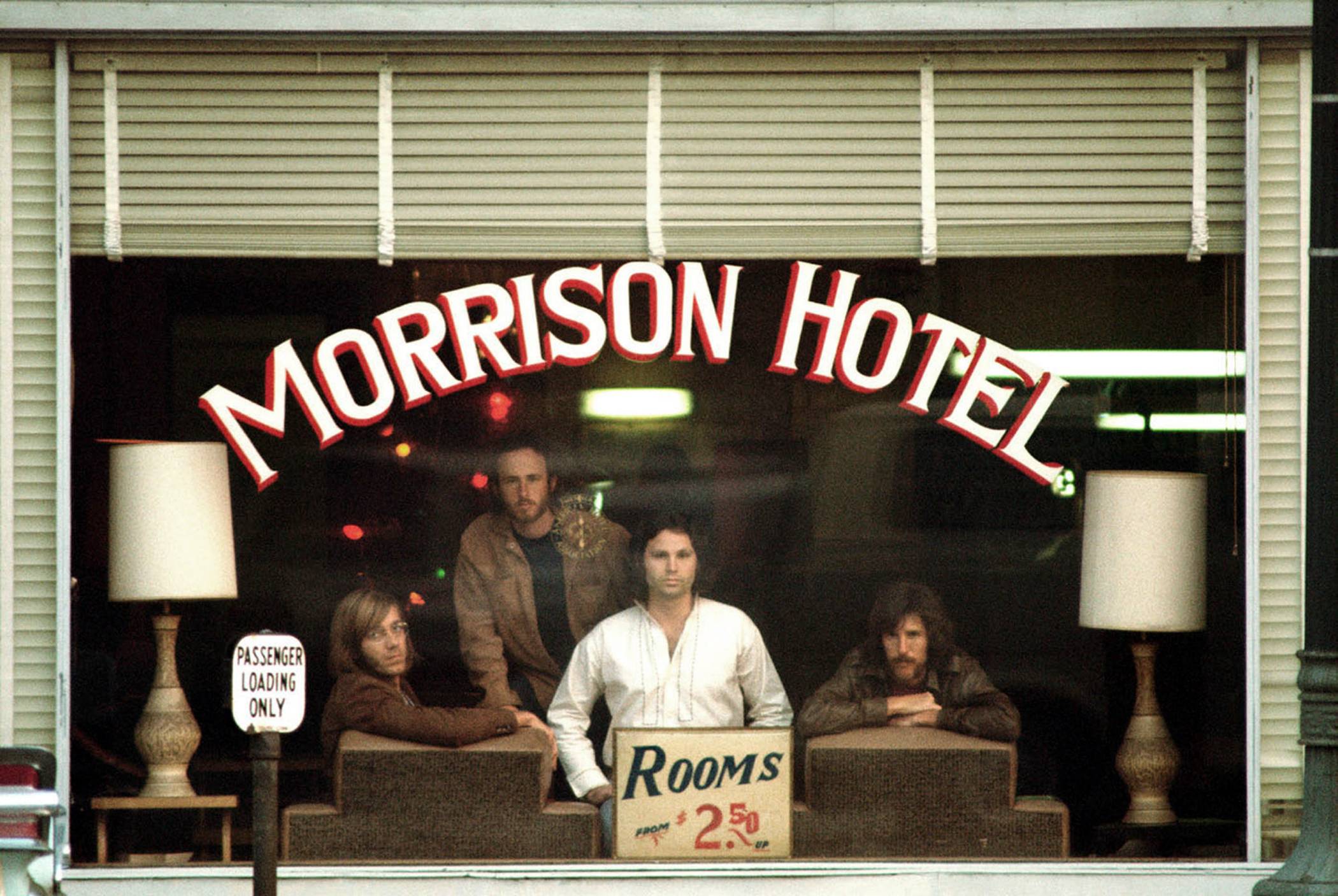 Looks like we were right! Today’s DLC is a 3 Pack from the legendary psychedelic rock band, The Doors! Bassists despite what you thought, you will have 3 bass lines to groove along to with the haunting vocals of Jim Morrison accompanying the deceptively complex guitar work of Robby Krieger.

Rhythm guitarists take note that you will have to opt for lead on both Riders on the Storm and Roadhouse Blues.

Also be prepared to play the excellent organ intro to Light My Fire on your six string axe.

The Doors are a band we weren’t 100% sure of when it came to licensing. Ubisoft SF has managed to secure three tracks from the pack that Harmonix licensed in 2010, so it looks like they aren’t too fussy about it. What would you rather see, Doors Pack 02 or Green Day Pack 02? Let us know in the comments below!

That’s the funny part of all this, mr ex guitar hero, that’s all you’ll ever be a wanna be because you can’t let go of a game that taught you how to press buttons on a fake guitar. As for DLC I’d like to see a second Doors pack hopefully with waiting for the sun and when your strange.

Sure sure Jeff … And now drink your milk .. Be a good boy and go to bed …
When you will wake up again … You will be a rockstar 😈

I’ve owned Bandfuse since 2013. I’ve logged maybe ten hours on it. I couldn’t even tell you how many hours I’ve spent playing Rocksmith during that timeframe. I see the appeal of using tabs, but tabs are not as good a medium for sightreading as the format Rocksmith uses, IMO. Especially for ex-Guitar Hero players like myself

When had bandfuse it was called guitar pro or sumthing, so I just used tabs instead. 😉

Oh and I just want to add, that’s one big problem I have with RS, they make a DLC, then they make another pack with the same group over and over, I’d like to see them spread out more and us a wider variety of bands, if you make a greenday pack then go make another, why not just move on to several other bands as to make a wider variety.

Call me a heretic, but I cannot get into this Doors release at all. For starters, what do I think of when I think Doors? Keyboards. I can think of a dozen Doors keyboard riffs and solos. Guitar riffs and solos, not so much. And of course, why would bass be interesting for them when they didn’t even have an official bass player? There, I said it.

Never happen, but Floyd DLC would be ridiculously epic. Are people still saying epic? It just sounds so passé already.

You must never have listened to The Doors if you cannot remember the guitar solos in Light My Fire, Riders on the Storm or Roadhouse Blues. Heck, Roadhouse Blues is a bar band/jam band staple. The solos for 5 to 1 and Peace Frog are legendary. Robby Krieger is one of the greats but he was in a band with a legendary front man and an amazing keyboardist and got lost in the shuffle.

This Doors release is epic, if you can’t get into The Doors you must either be really young, or a poor judge of great music, just joking, some stuff just isn’t for everyone.

What has to happen b4 we get some pink floyd DLC?

In order for the truly classic Floyd songs to be included you’d probably need to convince Waters and Gilmour to actually agree on something … so yeah pretty much never going to happen.

There’s also this. Pretty much required reading around these parts. It’s a little dated at this point but most of it still applies -- especially for those bands who are opposed to appearing in video games in the first place. But who knows? I guess stranger things have happened.

The gypsies had no homes, The Doors had no bass. But don’t let that scare you, my friend let that liberate you! ‘Cause when you’re free flying with the Doors, man -- what do you need a safety net for?

Hey do you have the new Depeche Mode?

These aren’t that great for bass players. Roadhouse is okay I guess. I’ll pass. Maybe they will do a second pack someday and include LA Woman.

I love the middle bass part of light my fire its like 4 minutes of the same 4 notes. Its almost hypnotic I’m pretty sure I saw Jim smiling in the corner of my eye

I’m still just not picking up the guitar as much as I’d like to. Too easy to get frustrated with chords and go back to the bass. The videos posted so far look interesting, though. Definitely more interesting than the Kiss or Aerosmith packs.

If I have to choose between Green Day and Doors, though? I pick Rush.

However, there are 6 Rush songs so far (I have them all, of course). I would rather (gasp) get new bands. I realize some of these are longshots (due to licensing, etc), but it would be stellar if they could lock down Black Sabbath, Dio, Deep Purple (other than Smoke), AC/DC, Metallica, Van Halen, Tool, Thin Lizzy, Eagles, Testament, Dylan, Cream/Clapton, Genesis, Springsteen, or even some more modern stuff like Mastodon, Stone Sour, Orianthi (what a babe, mmm), and so many others.

More Deep Purple would be fantastic, as would more Clapton. New blood would be great (I’d poo myself if Built to Spill or Fu Manchu showed up randomly), but so would more great old blood.

Fu-Manchu would be mint, in the same vein I would suggest anything by Kyuss

definitely more doors, i mean i like a good chunk of green days earlier career, but would still take another doors pack over a personal handpicked greenday pack

I would rather have more Doors than Green day. More than either of them some Black Sabbath, dunno if that will ever happen due to the licensing. Realistically I would like some more Rise Against prehapes some of their older stuff IE: Black Masks and Gasoline … Love Give it alll and Savior but not too in to their later stuff…The list continues More Queens of the Stone age!

Well, except if it’s a Mastodon pack, then I’d like a 5-pack please 🙂

I would really like to see a Tool, Godsmack, Chevelle(of what tunings they could get), or really any other band pack before they start adding more artists that already have packs.

I love this game, but i don’t want to see any “Band 02 pack” so that they have a wider variety of songs/bands and not just the same repeat stuff.

More from the Doors please. I would like to see People Are Strange in the next pack.
Can’t stand Green Day personally, so big no to another pack from them. ( Not a fan of Oasis, Weezer, 90’s pop rock either)

Personally, this pack looks great, but I’m sad that “Peace Frog” didn’t make the cut. For that reason (and many others), I’d take Doors 02 over Green Day 02.

As far as Green Day goes, I like to black out anything past Nimrod in my mind and pretend they didn’t make it and that it doesn’t exist. They got lucky after that with a few tracks, but even a broken clock is right twice a day. If they were to make a Green Day 02 with some classic cuts like “Welcome to Paradise,” “Brain Stew,” “When I Come Around,” “Redundant,” “Longview,” etc, then I could get on board. But whatever band made 21st Century Letdown is NOT the same Green Day. Ugh.

Either doors 2 or gd 2 would appeal to a lot of people but how about some more riff rock stuff, from the 80s/90s when guitar was the front man. Van Halen, Motley Crue, Def Leppard, Dokken, Whitesnake, Metallica, Anthrax, Slayer etc. etc. etc.

Can we get some more prog metal instead? Dream Theater, Circus Maximus, Symphony X, Vanden Plas….please?

Best DLC they have released in a while. I am very excited about this one!! This one came out of no where, I was expecting Bush this week.

Bush would have been cool

I’m shocked you’d even compare Green Day with The Doors. The Doors was a better band across the board as opposed to those Punk Lite® kids. There’s a reason it’s called classic rock and people still listen to it 40+ years later.

I don’t think you understand the basis of the comparison. Green Day and The Doors are both bands that entered licensing agreements with Harmonix’s Rock Band 4-5 years ago. Both bands received DLC 3 packs as opposed to a 5 song pack on Rocksmith 2014. There is no other comparison being drawn.

How about Tom Petty Pack 01? I could honestly care less about another Doors or GD pack until I get me some Tom Petty. Some goes for Def Leppard.

Is Light My Fire the radio version? It would be so cool to get the long version to jam with

It’s definitely the uncut version as far as I can tell.

I would be all over a More Green Day packs -- Redundant, Stray Heart, or just about anything out of Green Day Rock Band.
The Doors I’ve never been really into -- though had Break on Through been in there I might have bought it, due to it being a sing I’ve heard so much in the Rock Band 3 intro (yes, I’m a music game addict, so sue me) that it now gets kinda stuck in my head.

Redundant is a great pick!

Probably not a popular opinion, but I would rather see another Green Day pack, but I just was never fond of the Doors. They are just really low tempo for me. And as good a musician as Ray Manzarek was, I just never enjoyed listening to the Doors.

Definitely Green Day, I’d really like to have more from the trilogy. Stray Heart, Let Yourself Go, Nuclear Family would be a nice 3 pack. It’d be amusing if we got Nightlife though :p

Hands down, Green Day for me. The 3 pack for them barely scratched the surface, and Oh Love is often considered the weakest single they’ve ever had, so it’s a strange choice. American Idiot and. Basket Case are both classics, but I’d love some lesser known tracks like Hitchin a Ride, Maria, or even the 9 minute Jesus of Suburbia. That and Homecoming would be a 5 pack alone!

Right because this 3 pack clearly encompasses everything that The Doors has to offer….
Don’t get me wrong I love Green Day but they haven’t been anywhere nearly as influential as The Doors.

Disregarding the fact that Green Day gave rise to an entire genre of music?

me
Reply to  alex

I dont get it why not a five pack? I would think it’s a no brainer that the doors are going to sell well.

me
Reply to  Elliott

English… Do you speak it??

I think he does. But just in case, go to the top of this page and click the “About” tab on the left.

Author
Elliott
Reply to  me

I do, but sometimes I speak fluent Internetz. Apologies.

Some people think the internet is serious business E. Keep speaking them internetz.

>What would you rather see Doors Pack 02 or Green Day Pack 02?

I think I’ll stick with the nachos.