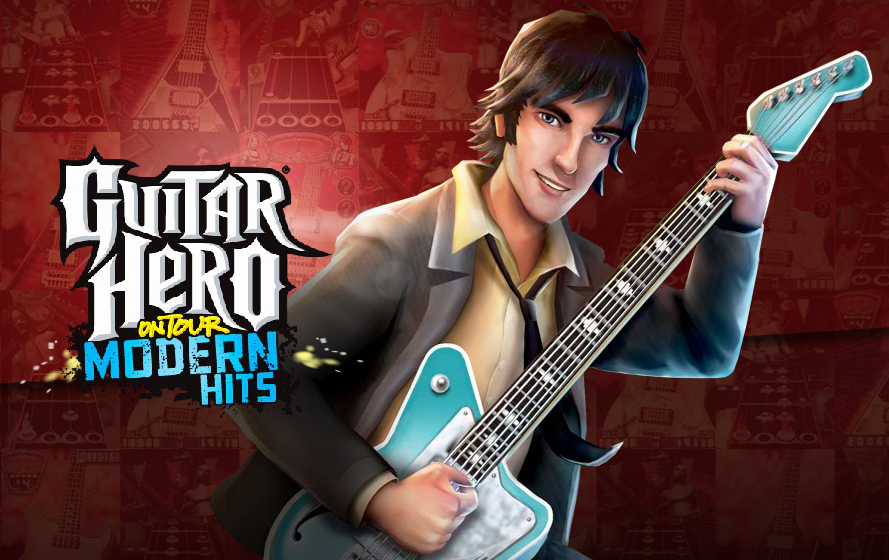 Someone was clearly buying these Guitar Hero On Tour titles, because within a year Activision had released three of them. The third title in this series was Guitar Hero On Tour: Modern Hits, with the unique selling point this time around being that all of the songs would hail from the 2000s.

Releasing day and date with Rock Band’s venture in to the portable gaming space Rock Band Unplugged, GHOT: Modern Hits was heavily criticized for being yet another On Tour game with nothing made to separate it other than a setlist.

Well, that’s not entirely true. The way the progression through sets happened was radically changed, with the “play four songs and an encore” method being replaced by a “fan requests” system that tasks players with having to meet specific demands from fans in order to make progress in the game.

A well liked feature from Guitar Hero On Tour: Decades also made its return in the form of the song sharing between games. This meant that owners of Modern Hits could seamlessly play multiplayer with owners of both On Tour: Decades and the original On Tour and have access to both setlists.

Given the fact that the title of the game is Guitar Hero On Tour: Modern Hits, it’s fairly easy to figure out what the setlist is going to look like. Each version of the game featured 28 songs released between 2000-2008. Just as with previous DS entries in the series the European and North American versions featured different, regionally focused setlists with each version having 12 exclusive songs bringing the total setlist size up to 40. Of the 40 songs, a meagre 8 are playable in Rocksmith 2014, for a total of 20%. This number is substantially lower than On Tour’s 38%, and On Tour: Decades’ 48%.

There were a lot of great songs in this setlist, and we have a lot of options to go with for what we’d like to see in Rocksmith. Narrowing it down to 10 was difficult, but here’s what we came up with:

Coldplay have become arguably the biggest band in the world recently, and they’ve appeared in pretty much everything except for Rocksmith. I can’t think of a better place to start than with my personal favourite Coldplay track. Violet Hill has a really booming guitar track going through it that gives it a great epic feel and would surely provide some great tones for us to use.

Love how noisy this song gets

Fall Out Boy – This Ain’t a Scene, It’s an Arms Race

The first Fall Out Boy pack was one of Rocksmith’s first ever five packs, but even with a large pack like that there were so many Fall Out Boy tracks missing from the game. TAaSIaAR has some great guitar work in it that would be a great fit for any guitarist’s repertoire.

Foo Fighters – All My Life

Showcasing the Foo’s hidden talent for unusual time signatures, Dave Grohl and company perform this hard-rocker with sections in 9/4 in addition to common 4/4. It would undoubtedly help to introduce intermediately-skilled musicians to the concept of playing in atypical time signatures if it comes to Rocksmith some day.

You may not think you recognize this song, but just one listen and you’ll very likely be transported right back in time to ten years ago when this song was everywhere. Along with tracks like Ruby and Club Foot, Chelsea Dagger was one of the most prominent tracks from the wave of British indie rock that came out in the mid-2000s. In fact, those three songs sure would make a nice 2000s Mix Pack…

Alright it’s a song that isn’t Float On! Rocksmith could use a bit more Modest Mouse and this single wouldn’t be the worst choice.

A pretty straightforward song but still catchy enough to warrant an inclusion, Drop D with an interesting chord progression

Weezer – Everybody Get Dangerous

Nothing wrong with a bit of Red album

There’s our picks, what songs would you like to see from Guitar Hero On Tour: Modern Hits end up in Rocksmith 2014? Let us know!

I never realized how many guitar hero games there were

These are mostly nice-to-have, but not must-have, songs in my opinion. Some of these bands have other songs in their repertoire that I recall more fondly. I have requested “We Used To Be Friends” by The Dandy Warhols, because I’m a bit of a “Marshmallow.”

I’d also go for some guilty-pleasure Bloc Party and maybe even that Louis XIV song from SSX.

I wont lose any sleep if none of these tracks ever make it rocksmith, lol.

yup… what he said…

Do you not like Kings of Leon on this site or something? And your “favourite” Coldplay track? WTF? Coldplay had one good song ever, Yellow, and everything else can be safely ignored.

Anyway, can’t play On Call on bass without a pitch shifting pedal.

I agree, Yellow is definitely their only good song. I’m not a Coldplay fan though