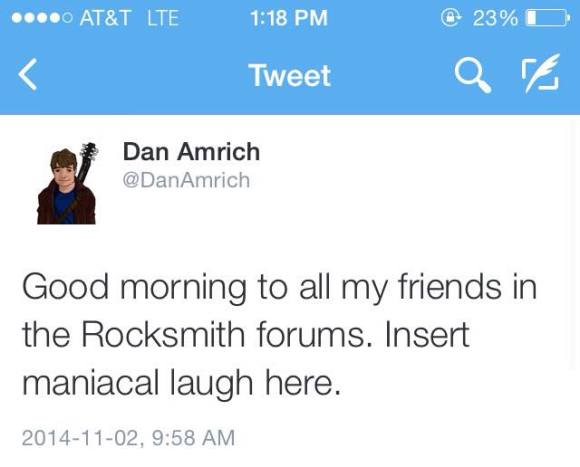 Well, Rocksmith fans, it looks like Dan may have finally stumped us all for the longest time. 81 pages and counting, and nobody has solved it yet!

It all started with a reasonably inconspicuous GIF image of the Rocksmith twitter feed’s Dream Guitar Friday image, hinting that there may be a file hidden within:

Using Sourceforge’s hide-in-picture software, The_Working_Man successfully cracked it using SGDiabloTremolo as the password, revealing a reversed MP3 file. Ox1a4toke reversed it, revealing a mysterious phrase in Polish, with the sole English word “Placement” in the middle.

After several attempts to translate the phrase, Dan posted this MP3 (reversed by theramiro000), which is the same Polish audio clip with the addition of spaces between individual phrases.

RollingStone222 transcribed it as this:

Which can be roughly translated as:

Dan then hinted at the translation’s syntax being wrong, and that the Polish phrase itself is confused. Lastly, he asked us to pay close attention to the difference between the two audio files.

And this is where we leave off. Guesses ranged from Jimi Hendrix‘s “Little Wing” to Live‘s “Lightning Crashes,” and yet nobody has managed to solve the clue yet.

Since this DLC is coinciding with the launch of the game on PS4 and Xbox One, we have much reason to believe it may be a pretty big release.

What do you think we’ll see on Tuesday? Let us know in the comments!

(Oscar writing now) UPDATE: Well, we finally know what we’re getting, thanks to the reveal on Facebook.

That’s right, it’s a 3-pack of Killswitch Engage, and we know one of the songs thanks to the post.

So, The End of Heartache is all but confirmed, but what of the other two songs? Well, let’s speculate, shall we?

This song has shown up in practically every other game KSE has, so it’s not unlikely that it will also come to Rocksmith.

Because this song was awesome the first time it came to Rocksmith, logic states that it must be awesome the second time around!

Are you happy for moar metal in Rocksmith, or did you hype yourself up too much for this? Let us know in the comments.

Seriously, do you just get off on being an elitist… On the internet of all places?! Get a life.

What did the Polish have to do with anything?

We interrupt the butthurt from the Killswitch Engage DLC announcement with some breaking news. According to an XBOX One leak, we will be getting a Tom Petty 5-Pack DLC.

The breaking news scene should be a picture of a guy smashing his guitar while in the corner there’s a Dan Amrich trollface.

Where is this alleged Tom Petty 5 pack?

Look at TRR feed and the Ubisoft forums.

The Curse is showing up on XBOX ONE store. Don’t see the third title though.

Thanks for the update 😀

Get ready for My Curse and Holy Diver.

Getting their cover of Holy Diver would be stupid. We already have the good version.

This is what all the hype and excitement was about…? Man here we were thinking we would actually get the likes of AC/DC, Black Sabbath, Zeppelin, Hendrix, SRV, some even guessed Pink Floyd.

Dan my man next time you throw such a curveball of a puzzle at us, it’d be nice if the reveal was a little more rewarding.

Well I’m not sure why you thought you would get any of those artists just randomly but that was your choice.

I wasn’t the only one lol.

Yup a lot of people like to get disappointed instead of listening to Dan and other members of the Rocksmith community explain how licensing works over and over and over. Stay tuned for a big announcement tomorrow though!

Has the ipad version left beta yet? I would think that’s the next big announcement.

Awesome looking forward to it. 😀

My friend likes Killswitch Engage
but I never really had the time to listen to there music, the only time was the holy diver cover and the song on guitar hero van halen

I really hope we get in due time in the pack, it’s one of their newer songs so also relatively likely. Rose of Sharyn would make this my fovourite DLC yet but it’s kind of unlikely.

Yes. Rose of Sharyn would be awesome. That would be the first song I have officially requested. Super excited about this pack!
Only 3 pack though…
Regardless of the song selection this in insta- buy for me.

Damn it, I was hoping for some Stones!

What’s the hate for KSE?

I don’t get it either…

still waiting for the megahits galore

Noname Rocker
Reply to  WHAT?

By logic we could get a Dio pack, Poison pack, Billy Squier pack by the end of next summer…

Haven’t had this big an anti-climax since my viagra wore off.

What a waste of a buildup to KSE, I figured next Gen release wold mean something great. That’s the last time I look at the hint on forums

Likely pack:
The End Of Heartache
My Curse
The Arms Of Sorrow

I actually really like this band and I’m not too big of a modern metal fan, so this was worth getting banned for almost…still waiting for Alice Cooper though…

The band is Killswitch Engage. Confirmed by Dan that it will be a 3 pack.

It’s Jefferson Airplane! The word placement it to let us know it’s in the atmosphere not starship!
This is my new assessment after frupel’s input.
The Bassist was of polish descent.

Good thing I prepped myself for a large letdown. I’d rather not have these puzzles as the hope it puts out gets bands like killswitch

We have reached The End of a Heartache as Dan’s Curse has been lifted. Killswitch Engage tomorrow.

The Polish translates to:

combination of changes near the aircraft placement errors, and the whole sky obscured by clouds

not sure if placement is part of the clue or just to let us know it was out of order.

I am polish native.
After listening to the reversed mp3 I have following thoughts :
It consists of three separate parts glued together.
Three words are cut in the middle and the whole phrase could be:
first part :

Dude…you realize that “Crazy Train” isn’t Black Sabbath…right? And that it isn’t Tony Iommi on guitar…right?

So I’m not sure what page of the forums this happened on, but someone mentioned a tweet sent out within the last week by (I think) another developer that referenced Wayne’s World.

I thought personally that his idea that Dan’s clue is a “trick” only and that maybe we’re getting Alice Cooper tracks could be the “treat.”

I’m on board. If that’s not the case, then party on anyway! I like most of the DLC, and I’m just happy that they continue to put new stuff out so often!

…could be the “treat” was brilliant.

Apparently my computer chopped those last two words off.

Jimi Hendrix is certainly big. U2 is another big one. David Bowie, Janis Joplin?

I’m gonna guess Brianstorm by Arctic Monkeys for no other reasons than it has storm in the name and has already been featured in Guitar Hero 5. Also Jamie Cook plays an SG and I really want more Arctic Monkeys. 😀

And on my birthday DLC? Well, at least I may actually get something worthwhile… I can dream…

Well, riddles, puzzles and mix-ups are one thing. But its getting to a point we’ll have to hire top notch hackers to crack a code for guitar players. That’s a bit much.

It better be a good DLC week after all of this.

Are you not entertained?!?!

I mean, if people don’t crack it, you only have to wait a few days for the actual announcement. Puzzles are fun!

Entertained.. heck yeah. Quite the shock after visiting TRR every Monday to find out the upcoming DLC like clockwork though! Dan really outdid himself this time!

Of course, now it just HAS to be something really good..

It’s either a reference to Dick Dale, or Iron Maiden’s Janick Gers!

I am thinking that Dick Dale is more likely and part of me wants to hope the “Placement” is reference to “Stick in the middle with you”.
That being said, look for some old school surf rock or a Tarantino pack!

We already had a Surf Rock pack back in June.

Kim Thayil from Soundgarden always played a black SG, so maybe that?

Hey this is NewWaveNinja, I got banned off the Dlc hint thread but I just wanted everyone to know that i was not intentionally spamming…

Boy, that clears it up!

Does that mean you were unintentionally spamming?