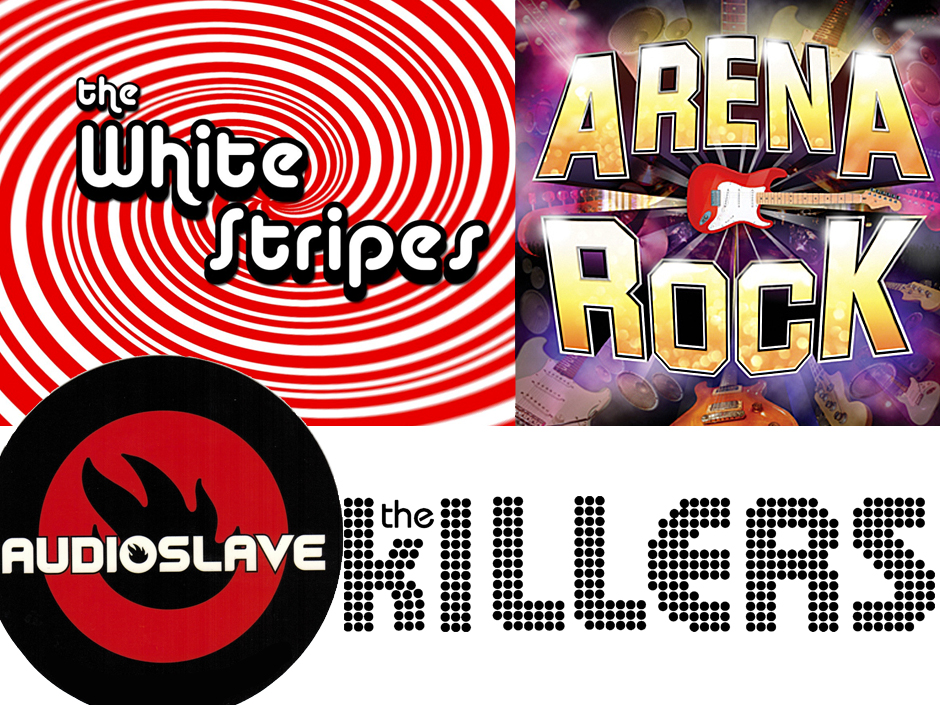 Hello Rocksmith fans, and welcome to the October edition of the DLC Round-Up! Each month we will take a look back at all the DLC we have received and poll you, our wonderful readers as to what DLC gave you the most bang for your buck!

October was quite the month, we were promised more mega hits and we definitely got ’em. It started off with us getting one step closer to Rage Against The Machine with a five pack from Audioslave, then the highly requested duo of Jack and Meg White followed with The White Stripes, We melted our faces off with the guitar work from Dio, Winger, Poison, Autograph, and Billy Squier with Arena Rock Singles, and wrapped it all up with the 80s revival sound of The Killers!

October was kind of a slanted month towards guitarists mostly due to the inclusion of The White Stripes, which included two tracks (arguably three) that had no bass arrangement. However there’s still some love for bassists in the content we did receive!

and of course pretty much all five songs in The Killers pack.

Picking the best guitar song this month isn’t even a question, you are going to have to really work in Riff Repeater to nail the cacophony of awesome that is Winger’s Seventeen

Check out Sam from UbisoftSF taking it on as well

Reb Beach, we are not worthy…

If that’s still too tricky you won’t want to miss out on this song in The White Stripes pack with the really long name that YouTube keeps blocking.

If you don’t mind tuning to Open A you pretty much owe it to yourself to learn Seven Nation Army as well, right?

There’s a lot more as well, you don’t want to miss out on The Killers Runaways which seems to call to Bruce Springsteen for a lot of it’s influence, Audioslave’s Be Yourself, because it’s another capo enabled song to add to your song library, and of course Billy Squier’s The Stroke because well, it’s The Stroke!

An interesting month for tunings as we welcomed a new Capo arrangement and our first Open A song!

Which brings us to the question on everyone’s minds…

With The Killers pack’s addition we have now hit 500 playable Rocksmith 2014 songs!

White Stripes all the way, Rocksmith-wise. Fun all around. They got my viote this month.

Soungarden will be next! There’s a Soundgarden Hotel at warsaw Airport!
I guess that’s it.

It could also be dream theater…

I’m more a bassist than a guitarist, and I thought on the bass front it was exceptionally weak. I find the killers basslines to be really quite unimaginative and tedious. But I got Holy Diver to play the guitar part, so I voted for that pack, even though it’s only one song i liked from it.

I voted for Audioslave. I bought three packs (Audioslave, WS and Killers) — for me, the Audioslave songs are fun to play, accessible and interesting when you break them down. I could see myself playing the intro of Be Yourself for ages and ages.

Killers was disappointing to me.

Rocksmith team: Huge thanks from here!! it is amazing

Only Audioslave for me this month.

Where is the dlc hint?

Enjoying Audioslave’s ‘Show Me How To Live’ a lot. It’s my favorite type of guitar song -- one that sounds really hard, but then turns out to be not too hard once you break it down. Conversely, I thought ‘Fell In Love With A Girl’ would be a piece of cake, but I’m struggling with the sheer speed of it. Anyway, really enjoyed both of those packs, nice work!

Just waiting for some Blues and Reggae.

I’m with ya on the reggae, but with 311, no doubt, and sublime, I’m sure as hell not complaining. Not that any are true reggae, but I’m happy to get some chuckin in.

May have to check out 311. I’ve got a 9yo and 6yo who both love learning guitar on Rocksmith. Don’t think Sublime would be a good match yet. Was looking for some Marley or for bass Morgan Heritage. Can dream I guess.

amber, by 311 was my favorite songto play in the pack, others I thought were just ok. Just my opinion though.. And hey I have hope for Marley, made it to Rockband just fine.

Arena rock!! this dlc was a surprise for me

So looking at xbox dlc sales I think its fair to say sublime pack 2 should be out anytime now… right Dan?
; )

I agree with this 🙂

A Sublime pack 2 would be very nice for me.

I would honestly love a Cream pack…who’s with me?

the defenestrator
Reply to  Noname Rocker

Cream would be fab, but I don’t see it coming. The one tune we had got excepted from RS2014.

I dont see sublime anywhere near the top, mostly classic rock at the top

He meant top rated I think.

Number 162 out of 444 dlcs, not bad for being out 2 months.
Sublime has passed up packs that have been out a lot longer if you look at the list.
Passed the clash, boston, the cure, godsmack, kiss, 311, lamb of god, deftones, and others.

How could Sublime NOT win first for last month’s DLC?? Sublime is so much fun to play. Creed was 2nd place for me personally, but that’s because I actually like the popular music…

…Which is why my vote for this months goes to the Killers! Audioslave gets second in my book and White Stripes third.

Anyone know when this week’s clue is getting posted?

A little later today. Working on it now.

Could you tell us the genre or decade?

I kinda regret asking… I really hope the clue is not the farce forum participants are beginning to call it.

I’m all in for the arena rock tunes.

I’m just wondering when all the great bands with only one song are going to get their own packs.

We need more Pat Benatar, poison, Dio and such…

haven’t played The Killers pack yet so, i’ll refrain from voting but as of now my no. 1 is the arena rock singles.

Are you watching these polls, Ubisoft?

Mike
Reply to  the defenestrator

No, now take that tin foil hat off.

the defenestrator
Reply to  Dan Amrich

Ahh, thanks, Dan. Gives me hope.

the defenestrator
Reply to  Mike

Well, now -- that was helpful.