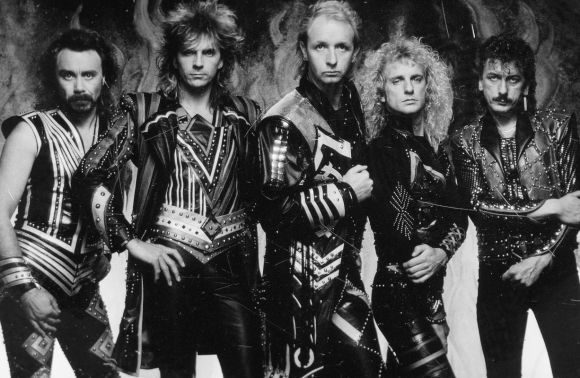 We interrupt #HendrixGate to bring you another Legacy DLC Review. Today, we’ll be looking at the Judas Priest pack from April 17th, 2012, featuring hits from British Steel and Painkiller.

In the interest of fairness, I should disclose a little something about my own musical tastes: With a few exceptions, I’m not much of a fan of heavy metal music. Not that I think that there’s anything inherently wrong with the style, it just isn’t something I regularly listen to. (This is why you won’t see me reviewing the Megadeth or 3 Doors Down DLC packs, even though 3DD is more alternative hard rock and post-grunge than metal) Those aforementioned exceptions to this rule are early proto-metal bands (i.e. Led Zeppelin, Deep Purple, and Black Sabbath) and, of course, the subject of today’s review.

This is easily the most accessible song in the pack, and probably one of the most recognizable in Judas Priest’s entire discography. Both the Lead and Rhythm arrangements are exactly the same until just after the bridge, where the Rhythm part plays the main riff an octave higher than the Lead, and then plays only the cords for the final few chorus repeats. While not very challenging, it’s still a lot of fun to play along to, and it helps as a good stat-booster or an easy way to get the achievements/trophies that require FC’ing a song. I’d recommend it to anyone who’s either first starting out or just in need of something easy and catchy to play.

The bass arrangement is pretty standard fare here. It’s repetitive, it doesn’t deviate from the guitar parts much, and is quite easy to FC, especially given the short length of the song. Not a bad bass track, but it isn’t really unique or memorable either.

While it may have a slightly more radio-friendly sound than Breaking The Law, it certainly isn’t a slouch on guitar. In addition to being slightly longer, Living After Midnight also has a short solo near the middle that, while not nearly as challenging as the solo in a certain other song in this DLC, adds quite a bit of depth to this arrangement. The chorus follows a rhythm that, while predictable, is incredibly catchy and really fun to play along to. Like most other songs in the Rocksmith catalog, the Rhythm and Lead arrangements are both exactly the same except for the addition of a short solo in the Lead, so consider practicing on the Rhythm track if you’re having trouble soloing in general before tackling Lead.

The bass arrangement for this song is definitely the weakest of the pack. I understand that Ian Hill’s bass parts are meant to be simple and melodic to lay the foundation for Glen Tipton’s and K.K. Downing’s more complex guitar tracks, but it just isn’t that interesting to play when the bass consists of the same 4-5 notes over the chorus and just 1-2 notes over the verses. That being said, bass guitarists can certainly learn from this song about how even simple bass groves can add just as much depth to a song as more complex driving grooves found in other rock bands of the era.

Do you remember when I referred to the “other” song with a solo from the Living After Midnight section of this review? Well, this is that song. Painkiller makes for quite a contrast to the other songs in this pack; Not only is this song damn hard on all arrangements, (I only managed just over 65% on lead, while I managed over 92% and 99% on Living After Midnight and Breaking The Law respectively) there are actually two really long solos rather than just one during the lead. The main riff on Bass and Rhythm is also incredibly hard to master, mostly due to the fact that this is also quite possibly one of the fastest songs in Rocksmith next to Queen‘s Stone Cold Crazy. If you’re up for a challenge, this will certainly be the song for you regardless of arrangement. This is also one of the few songs in the game that goes up to 24 frets on Lead guitar, so keep that in mind if you plan on playing it. For everyone else, I’d recommend practicing the solos slowed down in the riff repeater first before taking it on at full speed.

Pick of the pack: Living After Midnight

Perhaps it’s my inherent bias over metal in general that made me pick the softest and most radio-friendly song in the pack. See you all next time!

Did you just say that 3 Doors Down is Metal? Or not your kind of music? That needs clarification pronto!!

Perhaps I should clarify.
I am aware that 3 Doors Down is not really metal, and their style has little in common with Megadeth. I listed them because they were the only even remotely metal-sounding DLC pack released on Rocksmith before Judas Priest (aside from Megadeth, of course). They are classified as Post-Grunge/Hard Rock by Wikipedia, so it made a little sense to me at the time of writing this.

I guess it speaks more about my own taste in music when I don’t clarify the genre of a certain band prior to it becoming an issue with a reader or two. I understand what you mean, and I will edit the article slightly to accommodate for this.

i just ripp of that commentary i wrote about 20 min.. i just erased that one too , cause i think what ever i will wrote nobody will understand or might re presented it falsely bad , so why am i writting ? i could write all the time i will never have what i want , that game, i didnt create it ,they might as well get many artist just for ppl to give them money , it might endud like guitar hero or rock band or bandfuse. i kinda fell rocksmith isnt for me anymore nor the song that is put on for me , still they got great artist but for me that sabotage their pack what could be great turned out to be so so if not just one step away you just wrote 3dd as metal probably because you dont listen and doesnt really care about that kind of music. its almost like that kind of music is for ppl who can play music , all the other play pop or hipster ( mumford and sons , the black keys , sigur rios , king of leon ) that my opinion or making a work by excluding all genre because I dont really like that or its not for me, but i dont sell it to other by saying its it shit …., for me its kinda like shit but for other this is greatness absolute. i should start praying today ( any other religion art* could substitute or be employed as it was for use of sarcasm… ) that one day i ll see the work of those i send request for , but for now i will wait until an artist that might be valuable gets out , and again pray that they… Read more »

jawbreaker , hell bent for leather , the green manalishi , before the dawn , hell patrol … all painkiller album , almost all the ram it down album , almost all screaming for vengeance album , out in the cold , turbolover , the hellion / electric eye ( that would have been orgasmic ) , the ripper , Heading out to the highway , diamond and rust , judas rising , and to be honestly fair , i like them but not to the point of just listening non stop but those song man its something you can refuse if you love guitar

as for me that my opinion

This pack is a ton of fun. I didn’t even grab it until a cover band at our trailer park played a great version of Living After Midnight and I picked it up as soon as I got home. Breaking the Law is one of my favourite tracks to play cuz it’s really easy to nail and sounds good doing it too. And although Painkiller gave me a ton of trouble at first, it didn’t take long for the main riff to sink in. Highly recommended.

As a short update, I forgot to mention that the Lead arrangement for Painkiller is one of the few arrangements in Rocksmith that goes up to 24 frets. This has been added to the review, so keep that in mind if you want to try the lead guitar.

Thanks for reminding me. I loved breaking the law. Haven’t played these songs in ages because I bought them all on ps3 then moved to PC for RS 2014. Oh well may get these in the next steam sale.

Nice article. I really like these songs, and although the bass is really easy for the most part I love the guitar parts.

the defenestrator
Reply to  Honky thom

There is no guitar challenge on Breakin’ the Law, but I tend to find note recognition issues on the low E string. It’s been weird.

And yes, the bass is boringly easy on these JP songs.

Honky thom
Reply to  the defenestrator

yes, if I wasn’t a fan of the band I probably would not buy the pack to learn from.

I hope we’ll see more songs from them maybe in RS2016?

I’m with you Daniel. My enjoyment of heavier music stopped when Cookie Monster quit Sesame Street to play higher paying gigs. I think Ministry’s Industrial/Metal/Electronic fusion was the last metal band I could get into.

I would consider Judas Priest and Megadeth to be very similar. It’s more alike than most of the modern metal of today. 70’s and 80’s metal still sounded like Rock ‘n Roll, it was just faster and heavier (and had more make-up and higher platform shoes -- except for Bowie).

Judas Priest is always a go to in a ‘no buy’ week (like this one). The bass arrangements for Priest and Megadeth are where I go to work on my right arm muscles when I tire of other right arm ‘solo’ exercises.

What about You Got Another Thing Coming? It wasn’t part of the pack, but it came out almost a year later with Black Betty and Carry on Wayward Son.

I do plan on reviewing that pack later when the time comes. For now, I’m going to try to keep at least a bi-weekly schedule of reviewing DLC packs I happen to be interested in in a kinda-sorta chronological order.
If you’d like, the DLC Wikipedia page for Rocksmith has all release dates on it:

I can give you a hint on the next review: It’s going to be a pack that’s older than the Blues pack I reviewed two weeks ago, and will be the rare time I go out of order of release date with packs.

If you didn’t like the bass line to “Living After Midnight,” you’re going to hate the one for “You’ve Got Another F# Coming.”