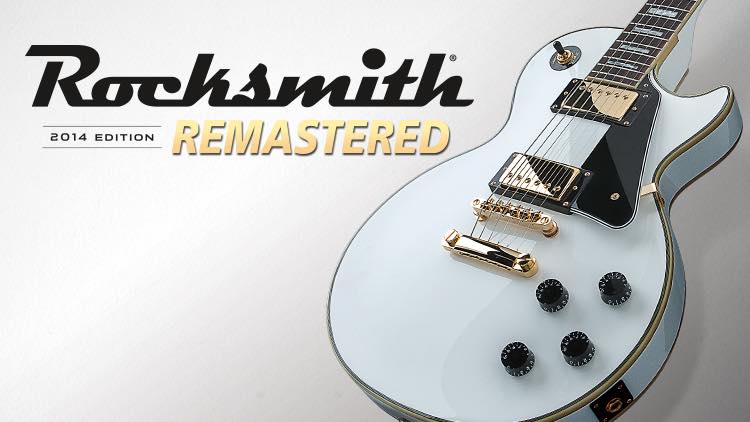 We’ve finally been treated to a sneak peak of some more of the changes coming in Rocksmith 2014 Remastered (due for release on October 4th).  Previously @UbisoftStudioSF treated us to some static views of the Player Stats and some of the changes to the UI, but this time we were treated to a live video of some of the new sorting features and how they apply to Nonstop Play. The video is linked, but static screen caps will make up the remainder of this post for those of you skiving off at work.

I don’t know about all of you, but I can say for certain – that I haven’t used Nonstop Play (NSP from here on) in over a year – and even then it was only to tick off a few Steam achievements. It seems the UbiSF team have access to some data that tells them NSP was being under used by too many users and decided to do what they can about that, as part of the Rocksmith Remastered update. 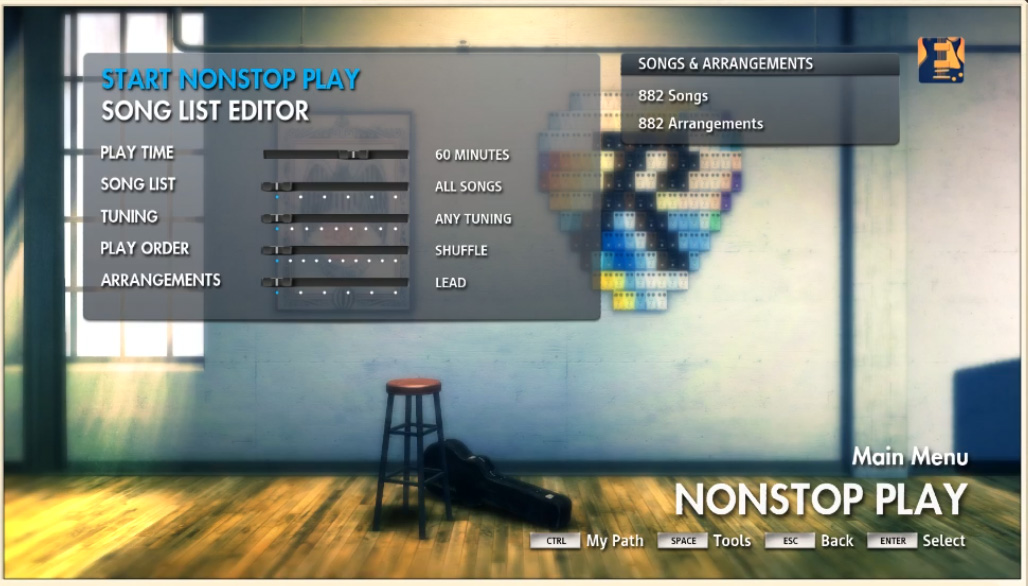 4 things should jump off of this screen at you and 2 of them are game changers for NSP.

Songs and Arrangements is a fun addition, it’s purpose is to show you how many tracks and possible charts you can see with your current settings in NSP, but it has a side use of also giving you an instant count of the tracks you have.

It is important to note that these filters can stack up, so these ones when applied with later options, can really narrow down your potential setlist. It all depends on how you choose to use the Favourites / 4 Song Lists.

Next we have the big one, probably the single most requested / screamed for / complained about thing that could be individually used as justification to do an entire remastered update – and the single biggest reason I haven’t used NSP in so long; 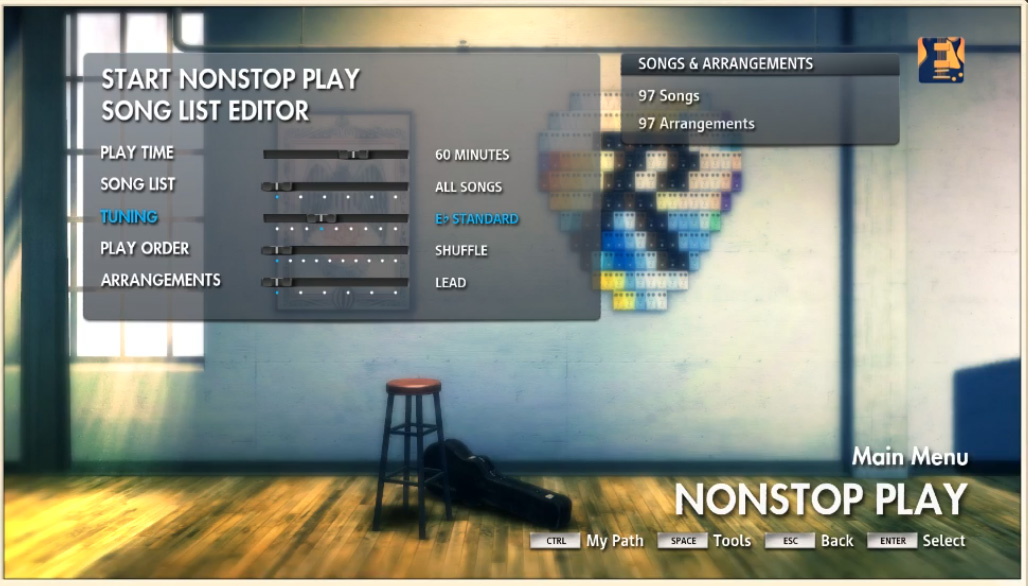 Notice how the Songs and Arrangements indicator went from 882 to 97? That’s how many arrangements are now in the list for NSP- it’s that easy. No need to use your 4 new song lists to create lists by tuning – you can simply filter by tuning in a few seconds!

The Play Order option includes all the options that you can use to order your song list while in Learn A Song – as well as the existing NSP option of Shuffle;

Select what arrangements are included! 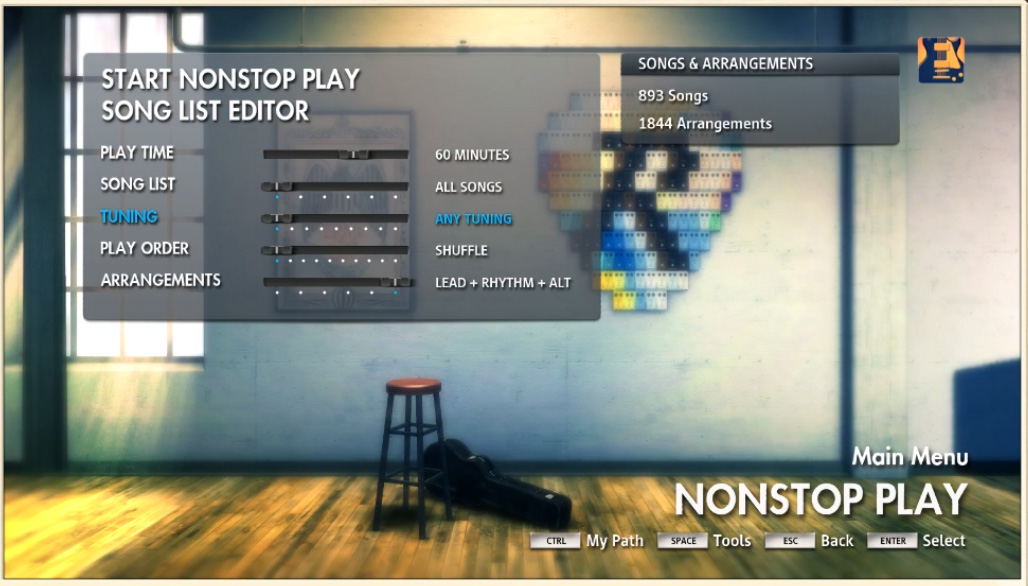 The Arrangements option allows you to add in what you are willing to play on each song. This could be a really good way of trying out new arrangements of songs, since they are added into the NSP list randomly.

The options are (while on Lead or Rhythm at least);

All songs, all tunings and all 6 string charts give us 1844 potential arrangements (based on the tracks that this account “owns” remember) to be included into NSP. It also shows that 893 tracks are now included – indicating that 11 songs don’t have a Lead path on them.

A noticeable omission here and one that I personally hope could be added in at some point – there is no ability to include bass charts (or emulated bass charts rather) into your 6 string NSP session. If we are getting a whole bunch of options to make NSP more user friendly, why this isn’t an option as well is beyond me. Hopefully this is simply due to the pre-release nature of the footage we are currently seeing. 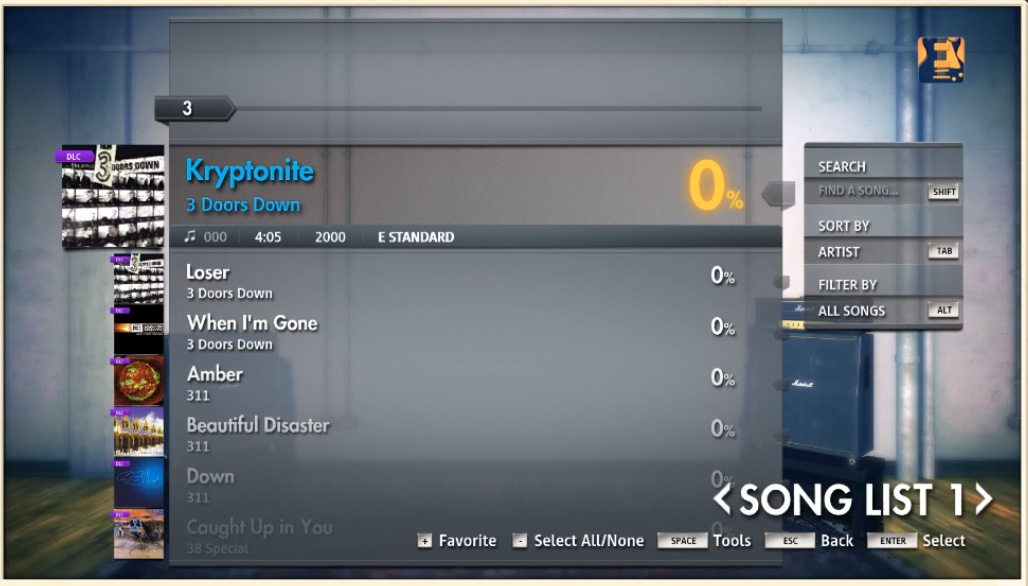 This is a shot from the Song List Editor;

The + key is used for Favourites and the – key toggles between Select All/None of the currently filtered tracks. There is a dialogue that pops up to warn you about the All/None option in case you accidentally hit the wrong key.

We are selected on Song List 1 (left and right arrow keys change this), we can hit TAB to Sort By as usual – but we can also press ALT to filter songs and better yet, we can hit SHIFT to start entering text to filter the list. The example shown was to enter in the text “FOO” and it instantly filtered out all the tracks that didn’t have those letters in that order in them – the intent being to get a quick list of all Foo Fighters tracks. Due to the nature of that kind of search it also included Johnny Winters – Be Careful with a Fool and The Shins – For a Fool. So if the select all option was then used and you wanted ONLY Foo Fighters tracks, you’d have to scroll down and remove those 2 from your list.

The All/None filters can also be used to do what a lot of people have asked about for a while – and that is “remove songs” from their game.

You could quite easily select all – then scroll through and use the ENTER key to remove tracks you hate from your setlist. In future, you would simply load Song List 1 – instead of the entire catalogue and never have to see those tracks again.

It is fair to assume that console users will be shown some other way of entering into these sort/filter modes. 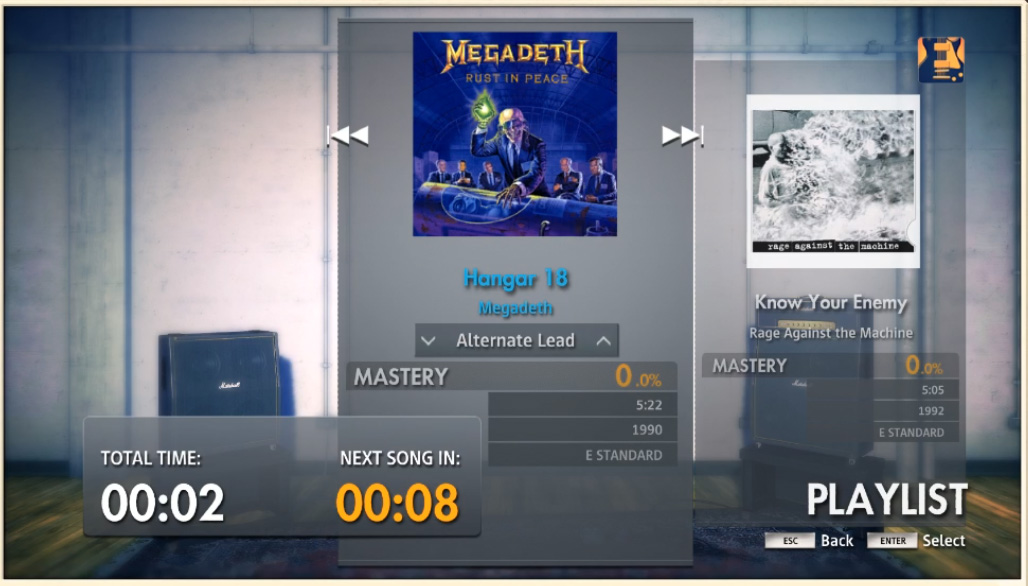 There are a few minor changes once you select Start Nonstop Play, the first one being the time in between tracks is now 10 seconds, instead of the previous 5. This is probably an especially good change for console users that need to grab their controller if there is anything they want to change or skip, since 5 seconds wasn’t long enough.

I personally think there should be an option to measure the NSP duration by “Beers” and not minutes, with a longer break between songs every 12-15 minutes to get another beer – but I can understand why they have stuck with the more “boring” minutes metric.

Notice those arrows beside the Alternate Lead indicator? Remember how selecting all tracks and all 6 string arrangements gave us 1844 potential arrangements that we could see in a random order? You can hit the up/down keys and change the particular arrangement you are about to play. So if it gives you the lead on a song you don’t want to play – hit up or down and you can choose the alt lead, rhythm or alt rhythm without having to exit NSP. It wasn’t made clear if you can only scroll up and change that if those paths were included in your selection at the start; or if you can load up NSP with just Lead set, then change to the others using the arrows on the fly – hopefully someone from UbiSF will stop by and clarify that for us.

This one small change is sure to be a hit with the players that do regularly use NSP – and when combined with the quick and easy filters – be enough to get a lot of players back into using NSP again. 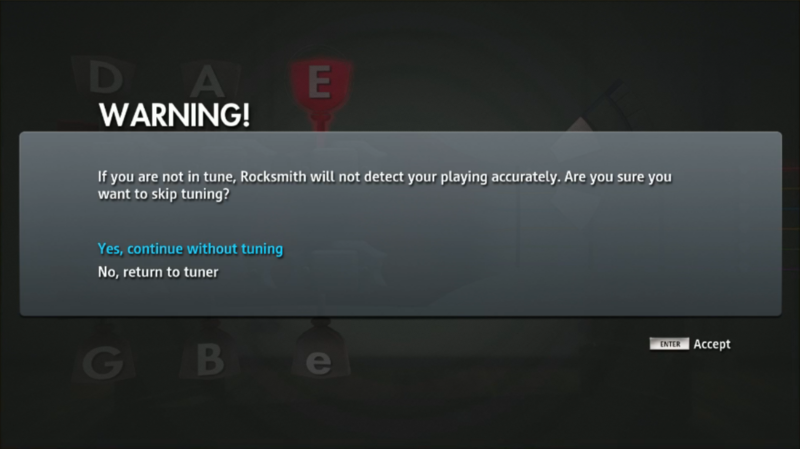 Yes, the controversial decision has been made to allow you to bypass the tuner. Whether this is good thing or bad thing all depends on what you want to get out of the game. 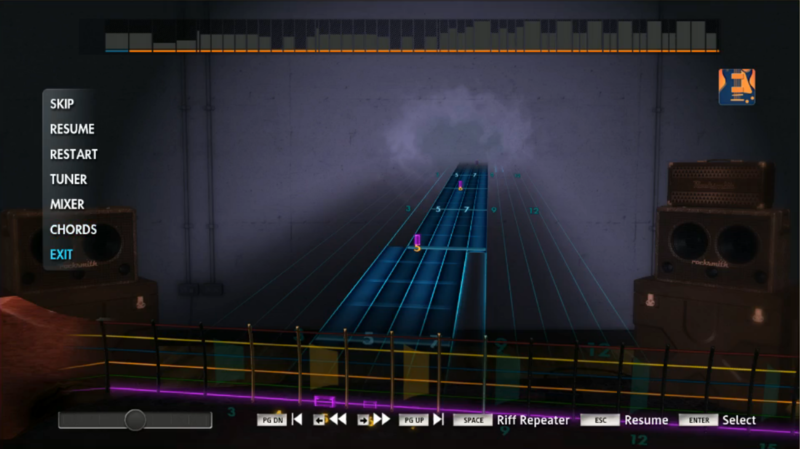 What do you think, let us know below;

Yes skip tuning is a good idea because if you stop playing and then return to the game a few hours later, your guitar is still tuned so you don’t waste time with the in game tuning.

You mean when you turn the game off I assume

Yeah :p
If you turn it off and then on a few moments later

This is nice, wish we could get it earlier… Sorry about elison, I saw he didn’t make it to Live @ Slim’s :/

I mentioned this on the live stream where we could get the songs ordered by on difficulty (I know there’s an iteration already in the game but this (alleged) sorts the difficulty level in an odd way). Hopefully I’m making sense (what?. No!)

The difficulty sorting has been a bit reworked as it won’t be based on the average level in the song (as it is right now which can give odd result) but on the max level the song have which might make more sense.

Thank you, looking forward to the updates and the new DLC too.

I didn’t even think the mixing of arrangements was possible. Changes went above and beyond expectations. Now we need online multiplayer and cut down the enumerating dlc time and it will be perfect.

Online multiplayer isn’t in the scope though, just play over Skype >_>

Skype is fine if you know someone but I’m thinking more along the lines of being paired with random musicians with different tastes and styles. Maybe even have some kind of teacher student lesson type of feature where you can take a live lesson(that you pay for of course).

Not allowing filtering by song speed is a massive over sight. The game has the metric and it’s the number one tool for learning music, s-l-o-w--i-t--d-o-w-n, and it’s strongly correlated to mood. WTF?

Nonstop play is the way I play Rocksmith 99% of the time. While I know a lot of people will use the sort by tuning feature, it’s not something I will use. I don’t mind frequently changing tunings and I have more than one guitar. The one thing that is a total game changer for me and is the one thing I always wanted in Rocksmith 2014 that I thought would never happen is the ability to have lead, rhythm, and alternates all mixed together in nonstop play. I absolutely can not wait to be able to use that feature. My nonstop jam sessions are going to be more fun than ever now.

Skip tuning! Thank you. Now I can jam along to songs like “red house” without having to trick rocksmith into thinking my bass is actually a guitar. It would be nice if when playing in “learn a song” mode the game showed you how your timing was on each note successfully hit like it does on score attack. Apart from the riff repeater, I never use “learn a song” mode after the very first time I play a new song because I can’t gauge my timing on it.

For bass, I found that the integrated tuner in the current version isn’t accurate enough -- the little circle fills up too quickly for me to get really precisely in tune, and more than once I’ve had Rocksmith tell me I’m in tune only to be able to hear that I’m out of tune once I start playing. I always use the pause menu tuner after starting the game proper to get myself as close as I can. So I’ll probably be skipping tuning a lot, at least on E Standard.

even with the advanced tuner?