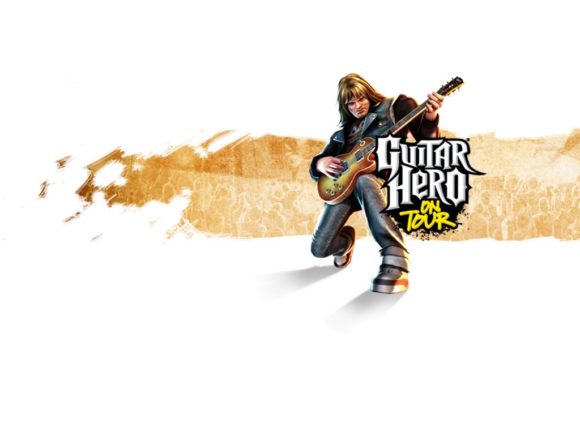 Following the release of Guitar Hero III: Legends of Rock, the Guitar Hero franchise was massive. Quick to capitalize, Activision developed a portable version of the game for the Nintendo DS. Guitar Hero: On Tour was released in May of 2008 and worked through an attachment known as the guitar grip that would plug in to the Game Boy Advance slot on the Nintendo DS. Because of this, the On Tour series can’t be played on the DSi, or the 3DS as they lack the necessary port.

The game was released to middling reviews, with a lot of the criticism coming from the setlist being geared more towards mainstream pop-rock, the sound quality on the DS being poor, and most commonly, the guitar grip causing lots of cramping in people using it. That said, in my personal opinion, the game overall does a very good job at capturing the Guitar Hero experience on the go.

As the game was released very closely to Guitar Hero III, there’s a fair amount of cross-over between the two setlists. Overall, the two games shared 5 songs (6 in Europe) between each other. It’s also interesting to note that while Hit Me with Your Best Shot and Pride and Joy were featured in Guitar Hero III as covers, in Guitar Hero: On Tour we get the original master versions. The shared songs are as follows:

The setlist features 26 songs, although depending on what region you live in, those songs differ. The two versions of the game feature five exclusive songs, with the North American (and UK, and non-European) versions’ exclusives being more NA-centric acts like Los Lonely Boys and Daughtry, while the European versions having more EU-centric acts like Tokio Hotel and Europe. For the sake of this Setlist Sunday we’re looking at the combined setlists as one. This means that of the complete 31-song setlist, 15 are currently playable in Rocksmith 2014, for a total of 48%. That’s substantially higher than the percentage of parent game Guitar Hero III, and the highest percentage so far.

Despite having a smaller setlist than other games, it wound up being incredibly easy to think of 10 songs we’d love to see in Rocksmith. Here’s what we want in the game:

Daughtry ft. Slash – What I Want

Remember this dude from American Idol? Just me? Ok, well it has Slash on it, seems like an approachable riff and the solo isn’t too crazy. Overall a fun song.

We already have The Final Countdown, but there’s the “other” Europe song that would definitely be worthwhile having in Rocksmith. The solo alone would make this a worthy addition to the library. Plus, this song finally ended up in another Guitar Hero, via GHTV!

This song has some great tones, great riffs, and some fun meandering licks. Overall it’s just a really chill song that hasn’t been in another music game since.

Lynyrd Skynyrd – I Know a Little

The true greats of Southern Rock, Lynyrd Skynyrd have been in Rocksmith since day one and have had a few songs released as DLC. That said, there’s so much more that we need, and the fast paced and intricate playing on this song is sure to give a great challenge to all who play it.

OK Go – Do What You Want

Am I the only one surprised there’s not one song by OK Go in Rocksmith yet? Just me? Ok…

I believe we’ve mentioned over here how incredible it is that we’ve never seen The Prince of Darkness in Rocksmith before, but we’ll say it again. A more modern output from Ozzy, this song was one of, if not the, most fun track in all of Guitar Hero: On Tour and there’s no reason why that wouldn’t stay true in Rocksmith. And of course, you can never go wrong with Zakk Wylde.

Sure, it may not be the most technically challenging song in the world, but the internet’s favourite song would be a fun one to bust out around a campfire or general hangout. Plus, it really goes with everything.

Or just a Steve Miller Band pack, lot’s of material there.

We got Rock This Town a little while back, but Stray Cat Strut’s light and jazzy feel would be fantastic in the game, especially for all the bassists out there. Maybe we can see this in a swing pack down the line along side some Cherry Poppin’ Daddies? A man can dream…

There’s our picks, what songs would you like to see from Guitar Hero: On Tour end up in Rocksmith 2014? Let us know!

You can update it, we got Jet Airliner.

I know a Little is seriously not only an underrated Skynyrd song, but also an underrated GH song. I personally loved Gh:OT at the time of its release, but will admit it has not aged well. With that said though, I sometimes breakout my guitar grip and DS lite JUST to play I Know a Little. It’s THAT good.

My DS no longer turns on 🙁

I don’t wanna stop would be awesome.

The only songs here that I would really like to see make it to Rocksmith are Heroes del Silencio’s Avalancha Los Lonely Boys’ Heaven, and Stray Cat’s Stray Cat Strut.