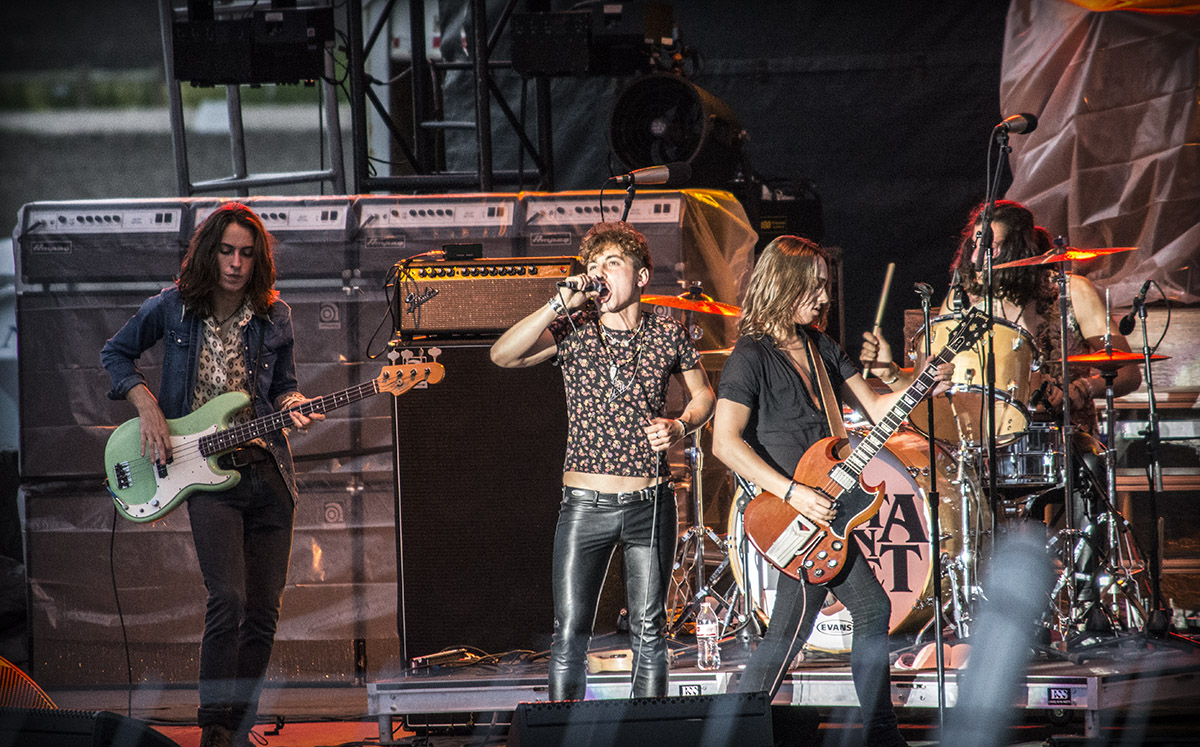 You crazy kids wanted more? Well you got it.

RollingStone222’s clue has been posted and solved, and with it we know that we will see the second pack from a very familiar sounding band!

That be a JPEG!

Methinks most of this puzzle was solved on discord…

I think you mean QWERTY, but that is a delicious solve… 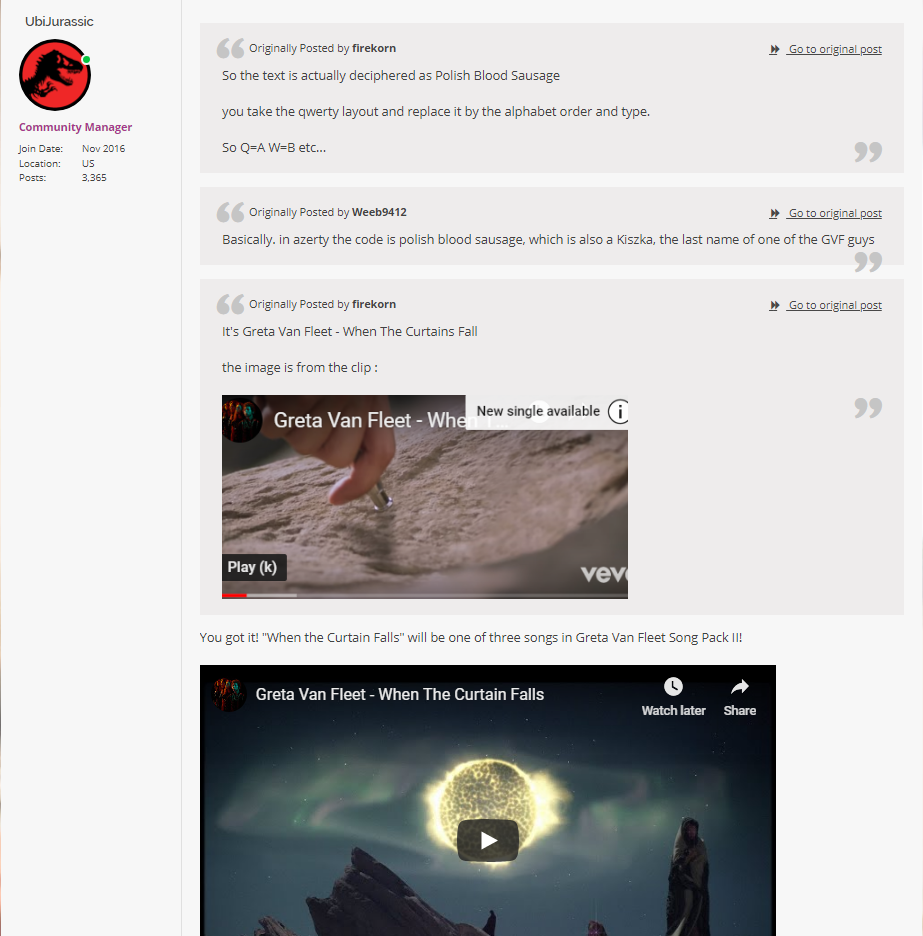 This is the SECOND appearance of When The Curtain Falls in a music game!

What other songs might appear in next week’s @GretaVanFleet II Pack?

Things could get both dark…

Are you excited for @GretaVanFleet to return to Rocksmith? Or is eight months a bit too soon? Let us know!

Yeah I hear you on this one. I know there’s a lot of behind the scenes licensing things that prevent some songs and artist from being on here but there’s still a never ending amount of music out there on top of the great bands that deserve a second or third pack so I don’t see why we needed this. I mean there’s tons of Radiohead yet the 2 songs I want are nowhere to be found. There’s also almost no representation of all the kind of post punk indie rock bands from the early 200 that were doing lots of cool angular guitar stuff. So many bands that appeared on the base disc haven’t even gotten packs yet which I find really weird. Where’s arctic monkeys and spoon and even a nirvana pack?

Yeah, didn’t they post that R U Mine? is the most played on-disc song? You’d think they’d try to make that happen. I would also love a Spoon pack.

Instead of second packs I rather see a real update to the game. Its like 6 years without any major changes and more dlc is great but at some point it adds little value in getting better. I wish they would add a recording option and make session mode a bigger part of the game like songs for jamming that score you on how you solo over a chord progression or playing rhythm over drum tracks.

Definite buy, understand the controversy around Greta Van Fleet but there is no denying that their guitar work is great.

Oh yes! I will take whatever they can throw at us. Lover Leaver would be a fun addition. i love that main riff in Brave New World. Throw in Cold Wind and/or Watching Over and I’d be happy too. Sorry for the peeps who don’t like the band. At least it isn’t a five pack of Imagine Dragons or some other newer stuff where I struggle to decide if I even hear guitar at all.

I’m in the middle on this. I’m not one to jump on the hate train when it comes to this band. They’re a bunch of talented kids. But I personally could never get into them. Happy for the people into this, I’m glad to see newer bands get some attention. Maybe one day we will get a Pop Evil pack?

I like the first pack, but the vocal on this song bugs me.
I wouldn’t mind Edge of Darkness if that’s in, though.

Like a lot of bands (even if I like them) that is the weak point of the group regardless of the song, but I’m starting to think that’s the sign of a good band. The Who, Pink Floyd, Sabbath, RATM, Zeppelin, the list goes on but the singer, is always the weak point, it’s really true of a lot of bands even if I or most people love them. Plus I could at least triple the amount of bands I listen to if I could only get the albums as instrumentals. I love RHCP, but I’d buy all my favorites if not all of them without Keidis and I like him. But Cradle of Filth has songs that sound awesome but in a fraction of a millisecond I want the song off once I hear anything from Dani Filth. I think every album should be released with an Instrumental version at this point. Really would be a smart marketing move, I’d buy both If I liked the group, but I’m sure most singers have to big an ego to get over that.

Oh wtf?! That was a fast turnaround. Blues pack was still my favorite of last year but GVF & Joy Division (2nd pack as well then?) were probably tied for next. I actually requested that song the day the video was released, even though I’m one of the bass (I play both) people on here I’d really love to have, You’re the One included in this, the lord be version has 3 guitars and I’m not sure if the album version has bass (hope it does), still want it. Haven’t bought a full pack since Chuck, probably no way I won’t buy this. A bunch of bands we have deserve a second pack, maybe more of those are coming. Still a lot of bands I like don’t have packs and even a lot of miscellaneous songs to fill things in but slowly Ubi does add stuff (what happened to 5 packs?). If they aren’t going to add a full pack No Doubt’s just a girl, should get added. I could settle for just getting Hum’s I Hate it To & Stars. I’d love at least 30 Prong tracks but at this point they could just throw me Snap your fingers, Snap your neck. Still no Fear Factory, Ministry, Static-X, Slipknot, NIN, Depeche Mode, Killing Joke, Eels, Monster Magnet, Tom Waits. Something from one of Rocky Erickson’s bands or at least throw me the big famous single, the 13th Floor Elevators, You’re Gonna Miss Me. Jimmy Olsen Blues would’ve been my first and maybe only pick from Spin Doctors. Runaround from Blues Traveler seems an obvious choice. Prophets of Rage. Definitely got my fingers crossed for more songs/packs from Stooges/Iggy (both hopefully, since no Iggy technically), Sepultura, all the blues guys, plus more of them, George Thorogood, Filter, RATM, Audioslave, Soundgarden,… Read more »

Not sure why spell check changed that, not lord be, live one. Always annoying. Really should proof read not just stream on conscience I know.

A friend of mine managed the doors to the day he died, but he always swore the 2 best front men he ever saw was Morrison & Iggy. He had good taste. He actually put Cobain into rehab one time and said the closest he saw to Morrison was Eddie of PJ, just positive energy instead, Jim swung both ways, that’s what made him dangerous. Like I said he had good taste. Really miss him.