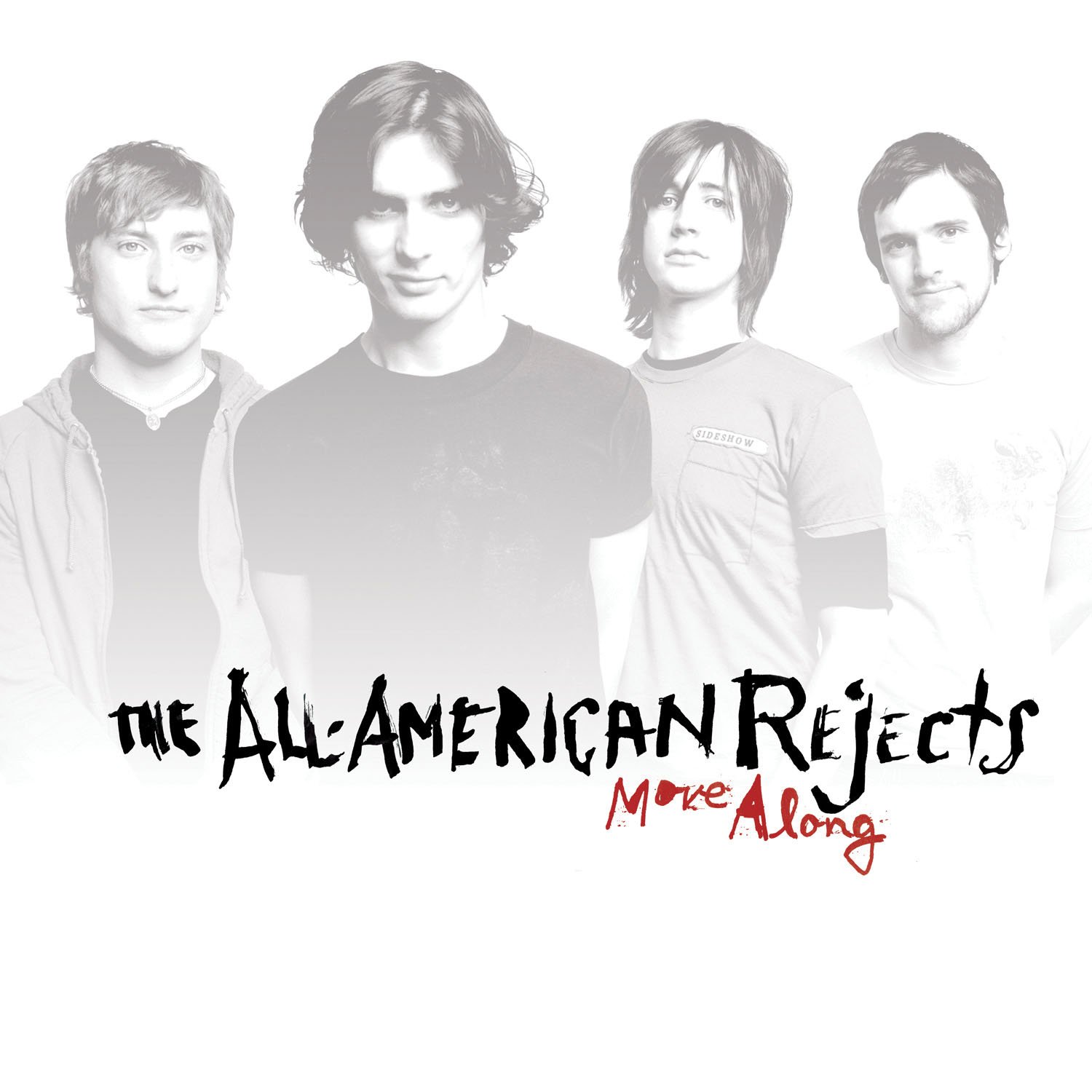 Dan’s clue for 9/8 DLC has been solved, and it looks like our band for the week is none other than music game favorite The All American Rejects!  Best known for their album “Move Along”, @therejects are definitely a poppy band with some bite and catchy riffs.

Hmm… something on fire… this couch gag really Gives You Hell?

Nothing to see here… Move Along!

This three pack hits next week!  Expect the aforementioned tunes:

Move Along is actually appearing for the second time in a real guitar/bass game, with the first appearance being BandFuse!  It was a pretty fun track there and I expect it to be just as great on Rocksmith.  “Dirty Little Secret” and “Gives You Hell” should also be great, fun, poppy tracks.

Like it?  Love it?  Secretly wishing we had gotten “Top of the World” as a track?  Let us know in the comments!

I am done. My Earth, wind and fire needs to be bought twice to play on both my ps3 and 4. The music lately has been roughly boring. Ewf is cool but still so many better things to learn…Bored and tired of filling my collection with crap. I may be back but they need to release rs 2016 soon and add online multiplayer stat. Plus I want scored drumming and vocals and I want an entire Megadeth 20 pack and pearl jam and RHCPeppas and I want it all now…and I want to use a racing wheel controller to play all of it.

First pack in a long long while that I am actually going to pick up. Small yey for that 🙂

How many people play rocksmith? If everyone who plays downloaded the pack or songs,you’d think that would be a good chunk of money to entice some of the hard to get band’s

If they aren’t making a new one, why not make a premium room or something??? A couple bucks more a song for the top requested type deal. I’m sure everyone would chip in a lil more for that sort of thing… Or am I wrong?

Oh my god I’m excited for this pack. AAR was the band that got me into music period. It’s gonna be great

Gives You Hell is one of the worst songs ever written…EVER. Remember that time when whiny singing, repetitive lyrics, and crowd chant sounded good in a song? Yeah, me neither!

I’ll move along and never look back.

Looks fun to play though.

I was really hoping for Night Drive when I saw it was All-American Rejects. Great guitar part I personally think

Congrats to those who like this band, but it’s a hard pass for me. I love learning all I can from different styles of music, and some of my favorite songs to play in recent weeks have been bands I never really listened to, like Stone Roses, Earth Wind & Fire, and Lynyrd Skynyrd (I’m generally more of a metal and punk guy) but I just don’t like this simplistic poppy radio stuff at all. Judging from the newsletter hints, I’m crossing my fingers that the next few weeks will have some great new songs to learn from, maybe if I’m lucky it’ll be Grateful Dead and Jazzsmith…

Jazzsmith? That sounds interesting. What do you have in mind? “What Does She Hope To Be” by Sonny Sharrock would be great.

I can’t argue with that. But, I know very little about that music. So, I can’t make many suggestions. Much of it is hard for me to follow, well, most the Charlie Byrd type stuff and what you mentioned. Same happens with symphony and orchestra music to me.

It’s interesting stuff. One of the wierd things about it to me is how it can sound like a totally different song the second I hear it. That’s what happened to me with a John Coltrane record and a Miles Davis record I heard on youtube.

That’s what I have so far. Checking out Jaco Pastorius right now. I hope to find more jazz songs to suggest for Rocksmith 2014.

Is there a forum somewhere where this idea is being hashed out?

love the SW clue and good timing on its use.

Who is that girl in the second clue?

She’s from Vampire Diaries, that’s as much as I care to know hahaha

I’m not familiar with that one. Probably a good thing. Since they don’t play music anymore I can only assume this must be an MTV show. Probably on right after Keeping Up with Boo Boo Shore.

Hmmmm… All American rejects… Not from the heartland or any good… They r a glam rock garage band at best .. Someone teach ubisoft geography .. Just when we had a few packs with some okay songs in them a turd? appears!

https://t.co/amccADcso6 Oklahoma does not border an ocean 🙂

No diss to the band but i have to admit, that was funny.

Slipknot or a second Iron Maiden pack would be great.

I would easily buy another Maiden pack. Slipknot, not so much (for me at least). I would also love to see The Sword debut in Rocksmith. Really pushing the limits here, but some Cannibal Corpse would also be awesome. I hold out hope since Hammer Smashed Face is in Rock Band. One can dream though lol. 🙂

I love slipknot but not on RS. some machine head would be sweet. doesn’t even have to be metal. I would kill for some George thorogood.

Hoping for
Top of the World
Swing, Swing
Move Along

The medication for metalheads are wearing off. They are starting to complain now.

How so? It’s a genre of music the we enjoy and would like to see more of. Same goes for the people who like rock, rockabilly, blues, soul, and country (which I also do). There’s nothing wrong with being disappointed in a few weeks choices for a style or band. I mean, the last bands we had that borderline metal were Volbeat and Faith No More. I personally think it’s time for at least a three pack from a band that actually flies the metal flag per se. 🙂

Never heard of them. Give them a listen. “wuss rock” is not for me. Still, it’s something the beginners can handle.

Personally, I’m going to pass. Really weak in my opinion. Hope those who requested this have fun. Hopefully next month we get some metal that apparently we get SO much of (even though it’s not that much really) 🙂

Gives you hell is right, listening to this garbage is definitely just like suffering in a pit of infinite despair and fire.

What the fuck is with all this pretty boy music? Can we have something from a band who don’t have manicures that match their man bags, please?

Lame…I’ve enjoyed this break from metal as much as the next person but next month better have something that will piss my neighbors off!!

exactly how i feel. or rock or punk just….music centered around guitar and bass. i dislike pop strongly but i want variety in rs no doubt. but yeah…we got slayer this one time…yay….and one song of motörhead…wow 22 albums and we get the played to death ace of spades. but hey some more pop….let’s just say it’s been a long time since i bought a new track or even pack.
sth post 1980 guitar oriented awesomenes might happen one day

I’ve complained about the Motorhead debacle repeatedly. The day they gave us that one damn song I requested 30 different tracks just to make a point. It really made me angry, I’d rather have none than just one, it was a total piss take. And still no pack, instead, we get this wuss rock. There hasn’t been anything with real balls since Slayer i don’t think. Was Dethklok before or after them? Anyway, there hasn’t been any metal for a long time…

I think we haven’t had a lot of metal recently because a lot of people were saying that we were getting too much of it. (I could be wrong) But in all actuality, through the whole Rocksmith catalog, there isn’t a whole lot of it to choose from.

I think there is like 600 dlc songs out , and outta those i think we got some pretty good variety for all players, metal fans of all types in the last six months have got a decent amount, spinal tap, anthrax , dethclok , all that remains, faith no more etc. Its a turtle speed because they only do 3 to 5 songs a week, but just over the last year has seen a lot of good bands.

I guess it depends on what you like. I never bought Spinal Tap, All That Remains, Faith No More, Bullet For My Valentine, Rage Against the Machine, or Killswitch Engage in the last year so I guess to me it would feel like a long time lol. 🙂

i gladly bought RATM and enjoy it to this day aswell as audioslave. but all that other stuff didn’t do it for me.
i’d kill for the sword. whole apocryphon album for me no matter the cost. well i just hope some big ones make it like acdc and sabbath.

finally something poppy the girlfriend will enjoy. took long enough Rocksmith. last release was what… Maroon 5?

I’m sure some people are going to complain about this band but I’m actually really happy they finally made it to rocksmith! They’re some fun songs and a day one download for me!

Wow, first group that has released something in the last 10 years and it’s All American Rejects… Are we getting 5 Seconds of Summer next?

It wouldn’t surprise me. Disco the first week of September, now teen pop. By the end of he month they will be selling Brittany Spears

Id rather have another rip off song from Jet.

haha damn I hate that band

I think there’s a good chance I pick this up. I’m not shy about getting hard songs to push myself, but a lot of the time it’s good to just rock out to stuff that’s mostly doable at max level, and this type of music is great for that IMO. Plus it sounds like the lead/rhythm/bass parts might all offer something different which is always a major plus in my book.

If it ever gets to the point where second packs become commonplace maybe we can get Swing Swing, Real World, and Top of the World.