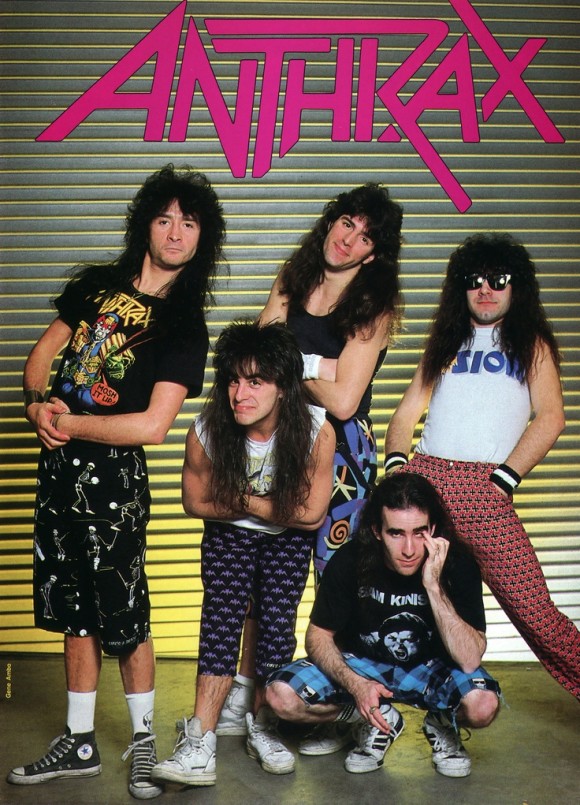 This week’s DLC comes to use courtesy of one of the so called “Big 4” (before you ask, no, it’s not Metallica, it’s someone MUCH better), so expect some finger shredding thrash metal that may just drive you to a madhouse! That’s right, Anthrax is coming to Rocksmith!

Earlier today, Dan posted the hint, which came to us in the form of a bunch of red letters. It was quickly discovered that other, similar posts of red letters were posted to Twitter. It didn’t take long for people to figure out that they had to move the letters in a bicycle lock pattern, and shortly after, the puzzle was solved. 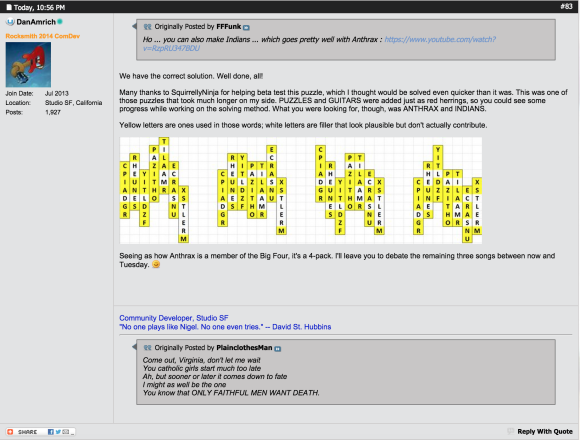 So, we know Indians is confirmed, but here’s what we’d like to see the other 3 songs be:

Because we could use some rap-rock that isn’t California Brain in the game, and what better way to do that than with one of the best rap and rock collaborations this side of Walk This Way!

Caught in a Mosh

I’d say this is practically a shoe-in, because pretty much any other game with Anthrax has this song in it! Helps that it’s awesome, though.

Of course, Metal Thrashing Mad would be my other pick if we were getting a 5 pack, but really, any Anthrax is good in my book!

Here’s hoping that we finally get that Slayer pack! 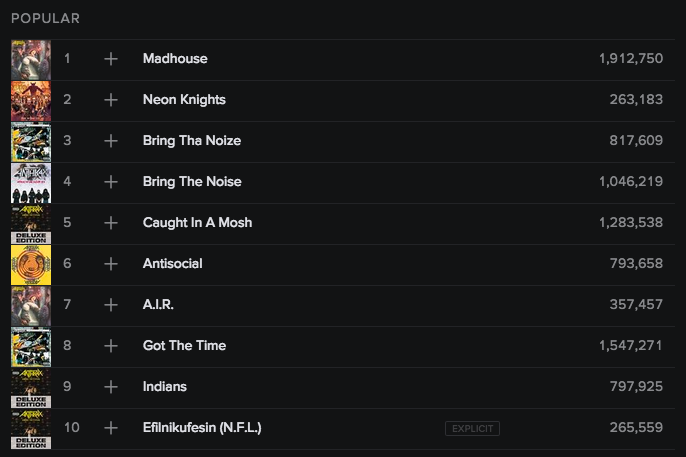 Here are the Top 10 most listened to @Anthrax songs according to @Spotify US! Which song is most likely to appear in next week’s four pack?

So, are you caught in a mosh of happiness with this announcement, or does thrash metal just make you want to check in to a madhouse? Tell us in the comments!

When is the songs being showed, it should of been done by now.

Songs have been confirmed as Indians, Madhouse, Caught In A Mosh, Got The Time

Thank you, looks like they have the 2 songs I want, thank you.

Sound of White Noise was an underrated album

Other two songs are no surprise. Madhouse and Caught in a Mosh. Available now on Xbox One.

Got The Time confirmed.

this makes me even more happy! It’s my favourite track by them.

So I’m pretty sure our guy here was being sarcastic when he implied that Anthrax was much better than Metallica. With that being said, here’s my, and maybe yours as well, REAL problem with Metallica.

Nearly half of their early stuff (Puppets & prior) has Dave Mustaine’s name on it. After they ran out of material he co-wrote and Cliff Burton’s death, weakness prevailed. Justice is no exception to this as Cliff has his finger in that pie as well before his passing. Lars could’ve been anyone fleet of foot of that time period (taking Charlie Benante if Anthrax as a fab example; dude can run like the wind). So really what were comparing here is Anthrax versus Dave “Super Technical Guitarist” Mustaine and Cliff Burton, arguably the best metal bassist of the period. No, Anthrax doesn’t stand a chance.

From the infamous Black Album and onward, guitar solos and technical complexity drop off, drumming gets lazy and songwriting just gets plain weird. So I guess the “peak” of the Metallica we have today (a la James & Lars) is really just the Black Album which is easily obliterated by Anthraxs’ mediocre stuff (Sound of White Noise, anyone?) and really doesn’t hold a candle to their peak (Persistence of Time).

Beyond the soapbox, I’m really hoping for Got the Time and virtually anything else off Persistence. Finale, Skeletons in the Closet, Who Cares Wins and I Am the Law.

Anthrax is not better than Metallica. Come on. I know Metallica has released a lot of pretty weak stuff, but their peak stuff far outshines Anthrax’s peak stuff.

I know let’s get real anthrax is fun but never even gets close to the best metallica.

Madhouse please! I just relived my GH days listening to it. Such memories… it was such a blast to play.

Really want Antisocial, but doubt we will get that. We might get caught in a mosh

Also is it just me or do Anthrax in that picture look like a Hair band?

Would also like I’m the man in a three pack with King of rock by Run dmc and Mama said knock you out by LL Cool J. (entirely serious)

Holy crap, Anthrax is one of my favorite bands. I’m a little sad Bring the Noize will probably be included. One of my least favorite Anthrax songs.I would cry tears of joy if Panic was included in the pack, but I doubt it will. Either way, so pumped for this pack. I doubt there’s any combination they could give, where I won’t buy the entire pack. Also, yay for Indians! They’re off to a good start.

Just throwing it out there, that tweet was from march last year and, with this, 2 of the big 4 are in. Megadeth and Anthrax. (Not saying I don’t want Slayer ASAP, or…you know, Metallica. Anytime.)

Indians
Antisocial
Caught in a Mosh
Got the Time

Poison My Eyes would be awesome!! Be dangerous, unpredictable and make a lot of noise!

it would be easy to lean on madhouse, as it has already been in GH2, but that doesn’t mean gh2 songs get in on the first. we’re all looking at you monkey wrench.

I am probably not the prototypical Anthrax fan, but it will be a shame if we don’t have a least one rap rock song. I had never heard of Anthrax prior to seeing them in concert opening for Kiss in 88, and “I’m the Man” blew me away live.

Got the time, bring the noise, and nfl all day. But mostly got the time. Yeah.

Indians and Caugh in a most are very important for me =)

I’ve never liked this band but I’m sure it will sell like mad. Congrats to the shredders out there

Indians
Madhouse
Caught In A Mosh
Got The Time