This week’s hint from Dan combined both ancient and modern greek, as well as a bass harmonic. WildBil2me figured out that the text read “What did the Greeks the call beautiful Egyptians;”. Could that hint at this classic 80s tune? You’ve likely read the title and seen the picture, so the answer is no to that one. Next, Dan posted this text string.

jagaroth40 figured out that it translated to “Image showing the time it may not be representative”. Dan mentioned that he was right with the gist, but there was more to it than just the words.

when I first saw the image I thought double stop harmonic & i googled songs with double stop harmonic & the wikipedia page for Double Harmonic Scale mentioned songs Misirlou by Nick Roubanis (I’ve only heard the **** Dale & the Del-Tones version) as well as Star Gazer & Gates of Babylon by Rainbow. Misirlou (Μισιρλού) is the feminine form of Misirlis (Μισιρλής) which comes from the Turkish word Mısırlı, which is formed by combining Mısır (“Egypt” in Turkish, borrowed from Arabic) with the Turkish -lı suffix, literally meaning “Egyptian”. That’s my guess.

Dan followed up by saying this:

The song is an old Greek folk song, but the title is Turkish, and both groups sort of claim ownership of it. That’s why both languages were used in clues. (Dale’s story about how the song came to be is cool and recounted here).

The “double harmonic” visual clue does not mean what it appears to mean — it was implying the scale, not literal notes being played in the game. (I made the screen in photoshop by overlaying the harmonics on the opening of Jeremy, it had no other relevance.) The song uses the double harmonic scale on the way up the riff, but the Klezmer scale on the way down. If I’d posted a scale diagram or tab, you would have just played it and gotten it too easily.

The lowered words in the secondary clue match the adjusted tones in the double harmonic scale. There are eight words in the second clue. I goofed because it’s supposed to be 2nd and 6th and the original version of the clue, I’d moved the 7th word. So that was a legit error on my part, but the second clue offered relevant information in the choice of language, the presentation of the sentence, and the phrase itself was trying to get you to look at the image non-literally. A three-fer!

But really, all you needed to do was answer the original question: What did the Greeks call the pretty Egyptians? “Misirlou.” Good work Mentok! “We don’t ask for the mind, we TAKE the mind!”

So. It is not a D. Dale pack, but “Misirlou” is one of the three songs coming on Tuesday. And no, it’s not a Pulp Fiction pack.

So, we know one thing that’s coming, and we know it’s neither a Dick Dale or Pulp Fiction pack, but then what COULD be next week’s DLC? Here’s three thing we think it could be:

It’s the start of summer, so what’s better than some surf rock kick off the season!

What would surf rock be without mention of the Beach Boys! Their only other appearance in music gaming has been Good Vibrations in Rock Band 3, but maybe without the need for masters, the options for Beach Boys tracks has opened up substantially!

The Surfaris – Wipe Out

Along side Misirlou, this is the other essential surf rock song. Maybe not as technically complex as Misirlou, this would still be a great riff to have in your arsenal! 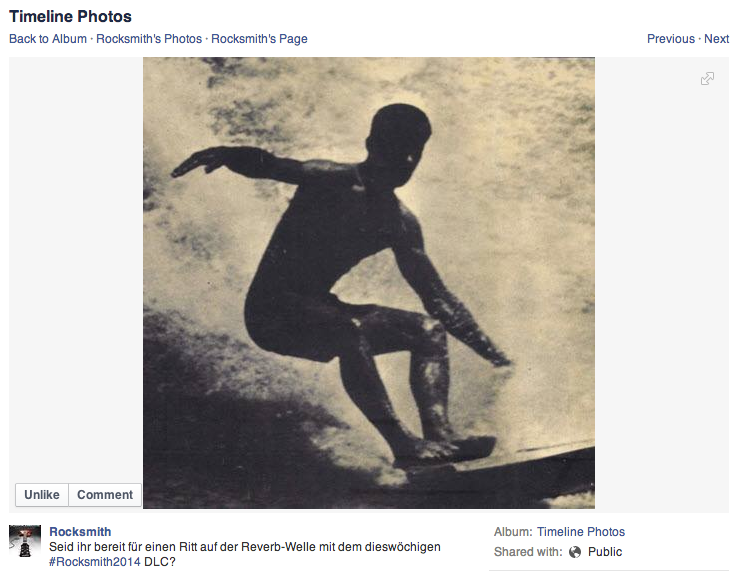 Are you ready for a ride on the wave of reverb with the this week’s DLC #Rocksmith2014? (Translated by Bing) 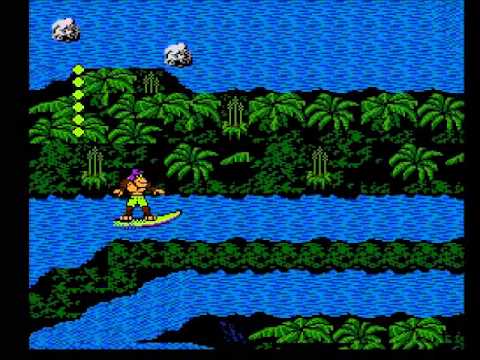 Tina , i'd really like to hear your three song suggestion. I am probably your fathers age but if I hear something I like I have no predjudices.

It is good to explore many types of music.

One thing I have got out of rocksmith games is being introduced to songs that I would have never even considered with out it.

Surprisingly some of the songs i originally did not like wind up being very fun to play.

might as well give the guitar to your father too because I don't think you get the relevance of learning a broad selection of styles that make you a better player in all respects. Real music? -- that's a narrow minded statement if ever there was one

I think you're a troll.

to ad weight, a few snippets (wikipedia, but im not putting my back out here)

Slash
During his first lesson, Slash decided to switch from bass to guitar after hearing Wolin play "Brown Sugar" by the Rolling Stones.[26] His decision to play guitar was further influenced by one of his school teachers, who would play songs by Cream and Led Zeppelin for his students.

Hendrix
Hendrix earnestly applied himself, playing the instrument for several hours daily, watching others and getting tips from more experienced guitarists, and listening to blues artists such as Muddy Waters, B.B. King, Howlin' Wolf, and Robert Johnson.[30] The first tune Hendrix learned how to play was the theme from Peter Gunn.[31]

Eddie Van Halen
Eddie acknowledged the importance of supergroup Cream's I'm So Glad on Goodbye Cream to be mind-blowing.[9] He once claimed that he had learned almost all of Eric Clapton's solos in the band Cream "…note for note." "I've always said Eric Clapton was my main influence

mouldy oldies are just as important as any of your favourites when learning. when I took lessons I had to learn old folk songs.. I don't know what your hoping for with your real lessons but best of luck and I hope the teacher is thick skinned when you berate them for not playing "real" music on day one.

It's not hopeless it's doing what all "real" musicians do …. it's going back to the past to appreciate the present i.e. exploring the roots of what made today's rock and metal.
All metal can be traced back to black sabbath by black sabbath from the album black sabbath but what's before that?
50's rock n roll, which in turn inspired the surf rock movement of the 60's
The first song the Ozzy sang in front of an audience (his family at a get together) was livin' doll by Cliff Richard.

60s music now? i might as well give this game to my father since i will start taking real lessons to play real music cause this game is hopeless

very cool glad to see more classics the chantays pipeline,/ the shadows apache /, the ventures walk dont run ,/ surf rider the lively ones / out of limits the marketts /pj and the galaxies The Rise And Fall of Flingel Blunt, /eddie and the showman squad car/ i could keep going but these are all great song from that time and all instrumentals at that

I was at a neighborhood classic car show the other day with my wife, and a band was playing a bunch of classic rock, especially surf tunes. Now, I’m not a surf music fan, but I do enjoy playing the Space Ostrich theme, and I love Misirlou. I commented to my wife that I wish Rocksmith offered more surf music, because it would be fun to play, and some nice variety.

Seems I wasn’t the only one thinking that. I’m excited!

You had me at Misirlou.
Surf rock would great. I hope the other 2-3 songs are good. More classic rock please.

All the predictions sound great. I’m looking forward to Dick Dale. I hope for more Surf stuff I love Space Ostrich by Disonaur and would welcome any more tracks focusing on tremolo picking, especially some Norwegian flavoured Black Metal

Rather have a pack for some on disk artists like Kinks, Cooper or SLAYER!

I agree with Dan, I would love to see The Shadows as well as the Ventures. Given that the Ventures are the best selling band in Japan and that Rocksmith gave use lots of japanese songs, I can definitely see the Ventures being included. Walk Don’t Run seems like an obvious choice indeed.

I wonder if this will be an all instrumental rock pack.

Space Ostrich was a really nice bonus song, glad to see more of this 🙂

Misirlou’s gonna make for a great tremolo workout. Can’t wait to see what else this pack has!

If we’re going the Tarantino route then I’d love to see Little Green Bag or Stuck In the Middle With You make an appearance. Though two from one movie may be asking a bit too much

Whoa! Looks like you have no appreciation for real music. Bet you like that metal crap they’ve stopped making because you metal types tend to have no cash.

I’m pretty sure there are more metal albums being produced than surf rock haha if you’re going to try and crack on someone at least make it reasonable.

Got me there, not sure how to battle this type if intelligence. I’m assuming you wear a helmet? Only to protect that brilliant mind of course.

David Lane! How the heck are you my good man!?

If only they could release more of this shit and less of that crap (you know what I am talking about, you Drop-C turdmasters)…

Or we can both be happy that they’re releasing a wide range of music that can appeal to many different tastes. That works too.

Misirlou is THE perfect addition to a guitar game! Gotta love that tremolo although Space Ostrich already did that well before ^^

That song might as well be in a Neil Diamond pack

very cool glad to see more classics the chantays pipeline,/ the shadows apache /, the ventures walk dont run ,/ surf rider the lively ones / out of limits the marketts /pj and the galaxies The Rise And Fall of Flingel Blunt, /eddie and the showman squad car/ i could keep going but these are all great song from that time and all instrumentals at that

gotta love misirlou what a classic. When I listen to system of a down its like a reminder of who made that scale famous first in rock music