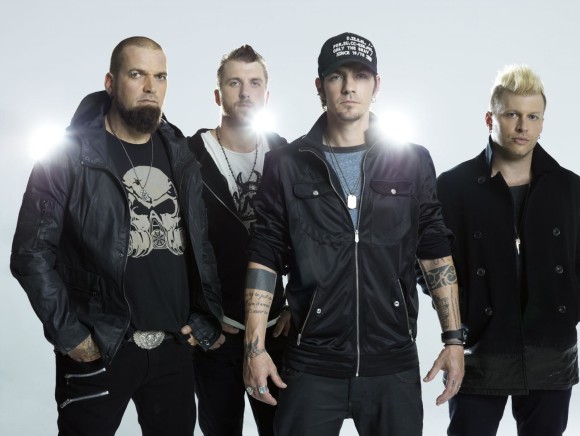 Dan’s hint this week was a pretty self explanatory cross word. 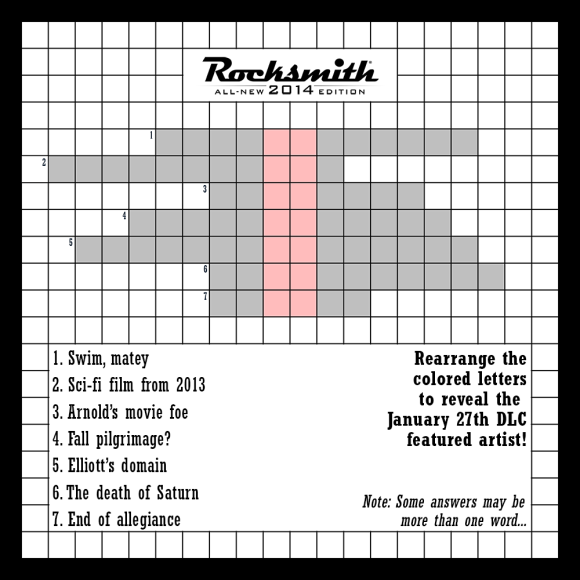 It took the combined efforts of everyone in the forum to get it, but we nailed it pretty quickly! 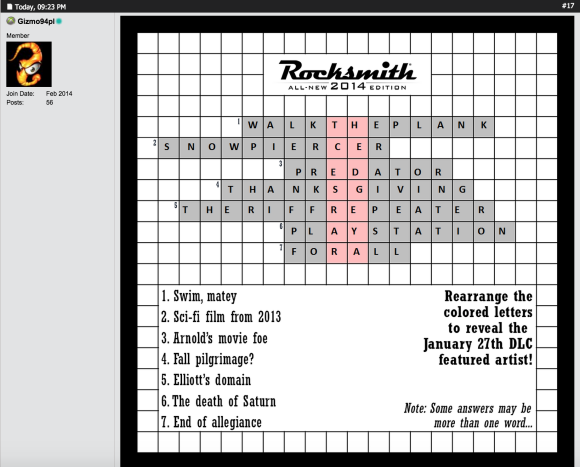 Thanks for the shout out, Dan! After re-arranging the letters highlighted in pink, we determined that it had to be none other than Canadian hard rock band Three Days Grace!

Three Days Grace and Rocksmith go back a long time, with their mega hit I Hate Everything About You being part of the third week of DLC for Rocksmith 1. Now, it appears we’re getting at least three songs from the group. Here’s what we think could show up:

Animal I Have Become

My personal favourite song of theirs. It’s got a great sounding bass riff going through out that, while lacking a bit in the difficulty department, would definitely be enjoyable to play. It would be a welcome fit in the Rocksmith library.

The only other appearance of this song has been in PowerGig, so it’d be nice to be able to get this in to a game people actually enjoy!

Another song that’s not über complex, but just has a cool sound to it. I wouldn’t complain if this showed up this week.

A slower pace with some nice acoustic sections. Again, nothing super complex, but it would still be a nice addition to the platform.

Next to I Hate Everything About You, this is probably the other really big Three Days Grace song. I’d be shocked if this one didn’t show up! 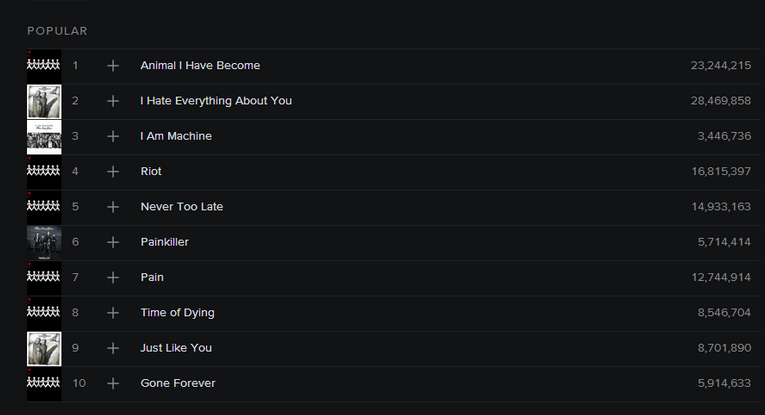 Here are the top 10 Three Days Grace songs from @Spotify, what song do you think is most likely to appear next week? Not on the list? Vote “Other”.

Are you excited by the prospect of more Three Days Grace in the game, or do you side with Elliott on this topic? Let us know in the comments!

@DanAmrich If we are just throwing out random guesses…Three Days Grace. In RS, modern, and don’t have a pack yet.

I’m gonna bitchin guys but…hints are usually more interesting than the band which is the answer itself.

I didn’t bother looking up the band

this post was edited because saying “Who? Pass” is a stupid comment that will be marked as spam from now on. -- admin

I Have Everything about this band… lol

I’m happy with these. I forgot how many radio hits these guys have! I guess I have been hearing them on local radio for about ten years though now.

I got it within a rock pack on rs1, i forget which one. maybe the mega one that had all queen and police etc but it was ages ago so forgot.

aboat as exciting as a bag of milk on nutrition break.

We all have our favorites and want those. I understand. I think they could release more stuff each week, and offer more choice. That would be great yeah?

I am kind of bored with waiting on these weekly trickle releases. I wish they’d just dump em all on us and let us ala carte already. Stoner jams and rap rock and rage against my daddy aren’t my thing but I can listen to those easier than listening to the why hasn’t my nazi death rock jams made it out yet. Let’s get it all already. I hate a little of everything, but like more of the same.

next week is always Slayer

I’m good with this DLC, not all of their songs are super complex but they are pretty fun to play. Hopefully they keep to the first 2 albums. I’d like to see:

Wake Up
Burn
Riot
Animal I have become
Pain

maybe i’ll be surprised by one or two mildly entertaining songs. i’ll wait till it comes out and i play them though, i can’t bear to listen through that list of songs.

Ughhhh… More bitching about not liking an artist.
Maybe I’ll be surprised next week by people’s acceptance that not every song pack is aimed at them.

2emo4me but i might get it. all i want in life is smashing pumpkins volume 2

not emo. not even close.

yeah was going to bring this up, not emo at all.

I had a feeling we were due for a week I have next to no interest in. Definitely not complaining though, I’ve still got a backlog of packs and songs I want to pick up.

But look at the positive side; Some people like it and it gives me more time to spend learning last weeks awesome DLC.

another 3 band crossed off, first 3 doors down hoping for three dog night and 3 is a magic number by blind melon

Edit forgot to mention 311 got that too, I bet the pope plays this game

I prefer the ‘De La Soul’ version of 3 is a magic number, but that’s just me.

‘Number Three’ by They Might Be Giants? Probably neither very good for Rocksmith…

A bit tangential but you’ve inspired me to find some TMBG tracks that would work and request them.

I didn’t write the article

Wish pain would be on this one but unlikely. My bets are on “Animal…”, “Riot”, and another “B” track…

Fun and easy songs for when you just want to mash at your guitar. I am so in.

Not for my mug of Coffees

not my teaspoon of heroin

Not my box of chocolates cuz ya KNOW what you’re gonna get.

Not my Forrest of Gumps.

Not my Jenny 1 load of jumbo Bubba Gump shrimp.

Not for my CONTEXT of my REFERENCE.

That’s my Forrest of Gumps.

Almost forgot Europe never got it.

Sometimes us not receiving songs is a good thing.

Well…i live in France and I’ve got “I Hate Everything About You” on original Rocksmith and RS2014 import. Maybe, I’m lucky ?

Don’t remember. I’ve got this song since the first RS.