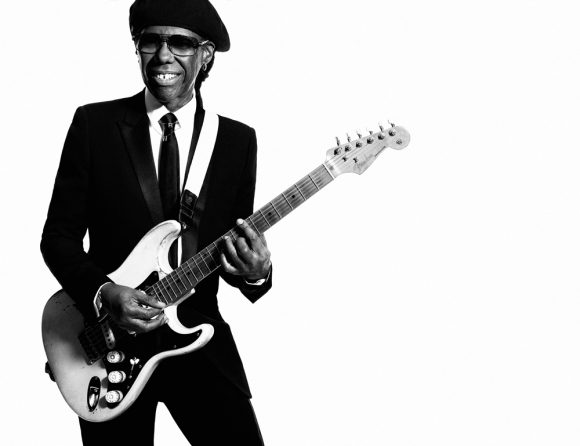 We’re all familiar with the greatest lead guitarists in Rock; I’m sure any of you reading this could name at least 50. And in spite of all of those jokes about how oft forgotten the bass guitarist is in Rock, there’s a good chance you could name at least 10-20 notable ones that have helped to shape the rhythm section of rock and pop for generations to come. (I’ll name 10: Entwistle, Deacon, McCartney, Jamerson, Sting, Lemmy, Geddy Lee, John Paul Jones, Flea, Chris Squire. You can name even more.)

However, how often do you even think about the role of the rhythm guitar? And when you do, how much is the rhythm guitar thought of as more than just the beginner’s guitar track? How many notable rhythm guitarists can you think of that aren’t primarily singers other than Nile Rodgers (pictured above)? Search “Rhythm Guitar” on YouTube, and this is by far the most popular video that pops up on the first page:

And it hasn’t even broken 3 million views yet. Why is this? I think I can tell you why: since the guitar can play both a lead and a rhythm section role, and it isn’t as integral to the rhythm as the bass and percussion are, its status as a rhythm instrument can often either be relegated to a singer who isn’t as instrumentally skilled as the other instrumentalists in the band (think John Lennon, Robin Zander of Cheap Trick, Ray Davies of The Kinks, etc.), or is played by the lead guitarist, with the band using a backing rhythm track when performing live. This could also be because of the fact that most rock music is built on a foundation of power chords, which aren’t very difficult to play.

It’s a real shame because the guitar can do some unique and interesting things as a rhythm instrument that can effectively complement the lead guitar without simply copying power chords without the solo. Since we’ve already done one article on guitar solos, three articles on bass guitar, and two articles on campfire-style acoustic rhythm charts, in this article, we would like to highlight 10 rhythm guitar charts that provide something interesting and unique over the lead guitar chart. Perhaps you would like to try some of these out yourself, all of you lead guitarists!

The only track representing Nile Rodgers to date in Rocksmith; since Good Times only has rhythm and bass guitar arrangements, it’s easy to see why a lot of lead guitarists might pass this one over. If you’d like a really nice instructional track on jazz chords and rhythmic strumming, this is a song to go with.

Andy Summers is, in my opinion, one of the most underrated guitarists in the history of contemporary rock music. He gets to show off his flexibility as an excellent rhythm guitarist with jazz sensibilities in Roxanne, just as Message in a Bottle shows off his soloing technique. Like Good Times, Roxanne only has a rhythm and a bass guitar track if you don’t count the beginner alternate rhythm track left over from RS1, so it’s also likely you could have passed this one up.

I know this might be cheating a little bit, since the rhythm chart on this song functions as more of an alt lead chart in a practical sense, but it still has, in my opinion, one of the more interesting rhythm charts in the game. For all intents and purposes, the Allman Brothers Band had two lead guitarists in its early days: Dickey Betts and the late Duane Allman. It’s a little hard to tell who plays which track, but both offer a remarkable amount of harmonic and melodic variation that complement each other without ever copying. May Gregg Allman rest in peace.

Boston: More than a Feeling

As a by-product of being an early RS1 DLC track, the rhythm guitar section in More than a Feeling contains all of the acoustic arpeggios, which the lead chart lacks. Tom Scholz used echoing acoustic guitar arpeggios extensively throughout Boston’s sonic palate as his “signature sound” along with reverb-drenched lead lines.

As explained on the Grateful Dead Livestream, the lead chart follows the pedal steel guitar, which was difficult to track due to the nature of the instrument and is, as a result, incredibly hard to play. The rhythm guitar chart is also hard to play, as it does a whole lot of interesting slides and movements that complement the upbeat nature of the song nicely without ever copying the lead chart. Even if you aren’t a Dead-Head, give the rhythm chart a try for some inspiration for how to add some variety to your chord playing.

Since we don’t yet have any Django Reinhardt in the game (hint, hint: request some), this gem from the first Bachsmith pack will have to suffice. Since we all probably know the iconic lead melody, the Ubisoft SF team has done a nice job introducing a rhythm chart filled with all sorts of complex and interesting jazz chords that might prove even more challenging than the lead arrangement.

Heart: Crazy on You

You might call this cheating again since the rhythm chart on this song is actually the keyboard part transposed and adapted onto guitar, but it works quite well regardless with ample chord variety and even a mini-solo at the end.

You wouldn’t think so at first, but the iconic intro riff for this song is actually played on the rhythm arrangement. Both the lead and rhythm guitars each play a slightly different variation of that riff throughout the song whenever the lead guitar isn’t off doing its own thing.

As one of the better examples of harmonized lead and rhythm guitars in Rocksmith, this track is a must-play along with the lead track for a great taste of the possibilities of guitar harmony.

What do you think, Rocksmith fans? Are there any exciting rhythm guitar arrangements that try something radically different from the lead guitar that we’ve forgotten about? What are your thoughts on the Rhythm Guitar as its own distinct instrument from the lead and bass guitars? Leave a comment below, and have some rhythmic fun!

I saw Chic play on Tues and Niles was absolutely amazing!

Rush! In particular, Fly By Night, Closer To the Heart, The Spirit of Radio, Freewill, Limelight. STP and SRV might have some good examples too.

There are guitarists who blend lead and rhythm in one single track, it’s more common when there’s only one guitarist in the band of course, but those guitarist tend to be exceptionally good, I know there are more but the names that come to my mind are: David Gilmour, Lindsey Buckingham and Johnny Marr. The point is when you’re a good guitarist every part is essential, it’s about how creative you are with the things you have

Great article. Any love for the rhythm section is appreciated. I listen to a lot of funk and rhythm is usually the only guitar part since the bass is playing “lead”. Lol

Rhythm Guitar in Public enemy number one is very difficult.

“Where the bass is known as the bottom end and the lead is on top, rhythm guitar often gets lost in the shuffle.” --MS As I continue learning, I find that often times the rhythm part is more entertaining than the lead. In songs such as All the Small Things [Blink-182], it’s only rhythm and yet you really get to attack the guitar throughout the whole song. I get that with Green Day and .38 Special’s Rockin’ Into the Night also. There’s a certain laid back groove in Tom Petty’s I Won’t Back Down, that drives me to only want to learn the rhythm in that song. Break that up with some rhythmic palm muting and there’s that comfortable area between attack and relax in Marley’s Is This Love. I think the rhythm section as a whole doesn’t get the same love as the lead because of where it sits and that it’s often repetitive. You don’t often think of Tito Jackson playing bass in the Jackson 5 because he’s just there keeping things going. Often times, it’s just that. Both the bass and rhythm guitarist are only keeping things going. When you have folks like Bootsy Collins or Flea who step out and show off what can be done on bass, the instrument gets recognized. When you have a certain groove that permeates through everything that’s going on (Entwistle, Jones, Barrett) the bass becomes undeniable. It’s like you can’t turn away. Rhythm guitar doesn’t often have those moments. This is one of the reasons I’m really looking forward to when we get some James Brown. Like some of those bassists mentioned above, in Brown’s music, you can’t escape from the rhythm. With James’ voice as the lead instrument, EVERYONE else is playing rhythm and the rhythm guitarists really shine.… Read more »

I don’t know what it is with Nile Rogers. You want a really good hired gun to nail the rhythm in your song, call him. He’s worked with everyone from Madonna to Beavis and Butthead to, SRV, to MJ, to Duran Duran. I’m pretty sure i heard him on some of my mother’s old Al Jarreau albums.

I’m surprised John Mayer didn’t bring him in to make the trio a quartet. Would have worked perfectly.

Actually I don’t think of Tito playing bass for the Jackson 5 at all because it was Jermaine who played bass with them live and to be honest I don’t think of him either. I think of the Motown Bassists Jamerson, Babbit and Felder. 🙂

OMG, you’re right. Tito’s always been the easy one to pick on. I forgot it was Jermaine playing bass. (never knew who wrote their parts, but I’ve read that the Jackson boys did not). Either way, neither one draws my attention for their musicianship--at least from the view of their more popular tracks.[probably have to dig in the crates to find hidden gems]

Side note: I’m not picking on the J5. My dad had a lot of their records so I grew up listening and loving them.