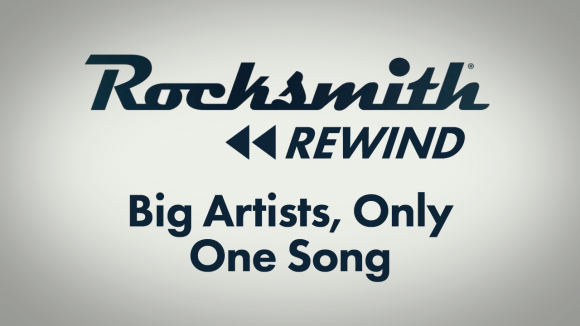 We’ve had some massively massive artists in game. And some of those artists were lucky enough to receive multiple packs, or even mega ones! But there’s a lonely bunch of sadly only ever managed to sneak one song in to the Rocksmith DLC library. What songs were they, and what other songs could have joined them to help form a nice, neat pack? Let’s take a look!

The Piano Man himself! This one is a great strummer, and has a good bassline thrown in too. Billy Joel has some really (and surprisingly?) guitar heavy songs under his belt and it’d be a shame to not see more of them.

Suggestions: It’s Still Rock And Roll To Me and Big Shot

What is it with these piano players also having superb guitar in their songs? This one is no exception, and with a must-play bassline! Elton John is one of the world’s biggest sellers who surely deserves a bigger place in game?

Suggestions: The Bitch Is Back and Crocodile Rock

Steve Vai is consistently said to be one of the greatest guitar players out there. A man of that recognition should have albums in game! Sure, the majority of us would likely have to take years of learning them to pass in Score Attack but it’s good to have a goal in life!

Them Crooked Vultures are a super group that mixes up Josh Homme (QotSA), Dave Grohl (Foo Fighters) and John Paul Jones (Led Zeppelin). What a line-up! They put together an album of some great songs then…didn’t do much afterwards. Let’s honour what was, and what could have been, with more of their songs!

Psychedelic rock weirdness, Tame Impala have done pretty well since their 2010 debut album. I don’t take psychedelics myself so I have to rely on more of these songs being in Rocksmith.

Suggestions: The Less I Know The Better and Feels Like We Only Go Backwards

There are plenty more artists who sadly never saw a DLC return, but we can be happy we had them at all! Tears for Fears (Everybody Wants To Rule The World), The Hives (Hate To Say I Told You So), James Brown (Living in America) and Philip Sayce (Out Of My Mind) are just some more artists who could only afford a single ticket to Rocksmith.

Are there any artists you were itching to have a reappearance of? Let us know!

These first two artists aren’t dlc, but Lenny Kravitz, and Red Hot Chili Peppers could really have used more songs in the game. I also wanted more A Perfect Circle, Huey Lewis and the News, Candlebox, Children of Bodom, Clutch, Helmet, Devo, Flaming Lips, Nightwish, Joe Bonamassa, Kasabian, Living Colour, Death, Machine Head, Silverchair, Temple of the Dog, The Ventures, and Wes Montgomery. Whether or not those artist are “successful” enough to go along with the article title is debatable, but to me, all of these artists could have used more representation.

As far as the artists mentioned in the article. Yes. More please.

Ok, so I understand that the only reason we have a James Brown song was so Ubisoft could sneak SRV into the room. SRV went on to have an excellent pack, but what about the Godfather? So in order to satiate those bassist requesting more attention, how about we focus on a 17 year old Bootsy Collins via the song Super Bad. Other songs in the pack could be:
Mother Popcorn
I Got that Feelin’ or Cold Sweat
Papa’s Got a Brand New Bag
and just for a twist (or if you put together another Christmas pack) Please Come Home for Christmas (stay till the end of that song to hear James gives up the ghost)

Stevie was already in the game with Albert King.

Ah, yeah, you’re right. I forgot about that one. Good call.

The Donnas: Who Invited You, which is somehow even stronger than Take it Off (which is amazing) , Warrant: Uncle Tom’s Cabin. Rick Springfield: Love Is All Right Tonight, Don’t Talk to Strangers

Iggy and The Stooges

Huey Lewis and the News

Based on a newsletter clue, I once made a statement in here that it seemed odd that we had the Rolling Stones, and 1 track from Howlin’ Wolf but nothing from Sir McKinley Morganfield. (That’s Muddy Waters to you civilians who haven’t enlisted in the blues). Turns out, that was some of the DLC that month.

Now, going the other way, how is it we have Muddy Waters, but his rival is near absent? (those who know a little about the blues will understand my statement). Howlin’ Wolf only has 1 song. C’mon Son.

So filling out that list (with a little assistance from a GW article I read covering some of Jimmy Page’s favorites). here are some of my favs from Mr. Chester A. Burnett.

Alright, taking a turn in a different direction. I saw a few moments where it seemed like Ubisoft would release an artist in the midst of some sort of variety, mixed, or decade specific pack, and then follow that up later with an actual pack. Taking that lead, I was certain that Huey Lewis & the News would have a pack come out before everything was said and done. I was looking forward to songs like:

Any good 90s band that had one song probably deserved a pack. Definitely Soul Asylum so many good songs to pick from and great mix of rhythm, lead and interesting bass lines . Silverchair had a few songs that were a lot of fun especially for d drop tuning and a pack would be popular I bet since its heavy but accessible to most guitarists. Even a band like Semisonic had some really good guitar songs back in the day

The only reason I was wary of including it is because imo Funeral for a Friend/Love Lies Bleeding need to be together! Like a few songs before (Brain Stew/Jaded being split for example) I’d hate for it to be split too