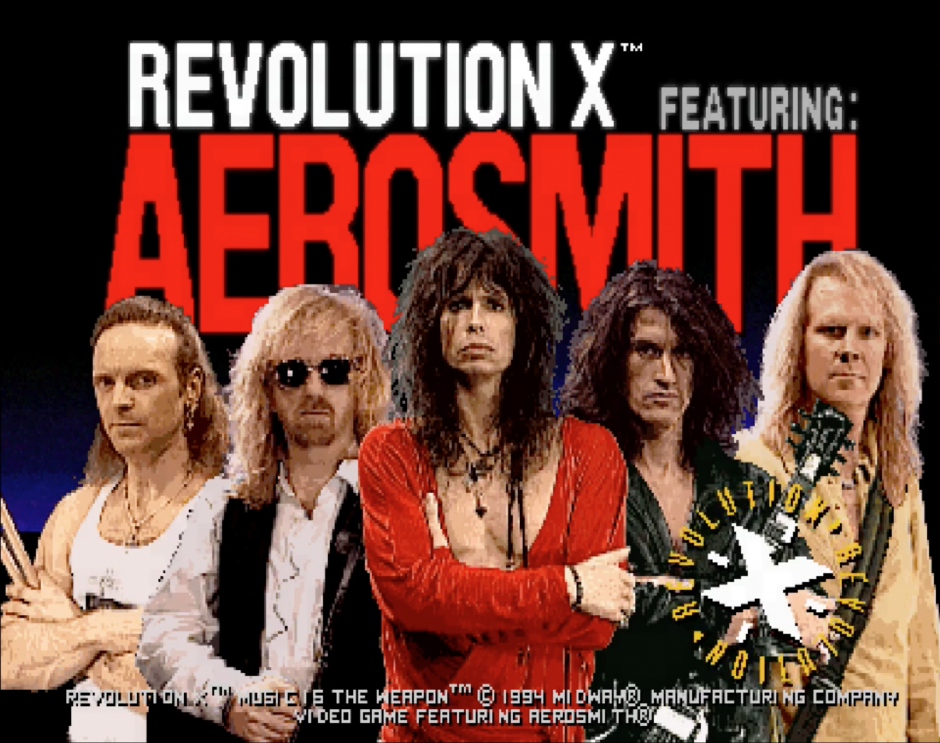 When Midway was looking to make a follow up to their incredibly popular Terminator 2: Judgment Day arcade machine, there was really only one logical property to base it on: Aerosmith! Released in 1994 for arcades, Revolution X was a rail shooter where music is the weapon. Later on the game was ported to the SNES, Genesis, Sega Saturn, PlayStation, and PC.

The plot of the game was deep. The year is 1996, and the diabolical New Order Nation has declared war on the youth after banning all entertainment. When you head to LA’s Club X to see Aerosmith perform live it all goes pear shaped when the N.O.N. kidnap Aerosmith in the middle of the concert by Head Mistress Helga. You escape the club, steal a helicopter, and the find Steven Tyler’s car. Then you travel to the Amazon Jungle, the Middle East, and South America (where they’re putting chemicals in the food!!) before finally going to Wembley to kill Helga and watch an Aerosmith concert.

Gameplay wise, it’s functionally identical to Terminator 2 by being a rail shooter designed to eat quarters. A seemingly endless horde of N.O.N. soldiers, combined with limited ammo, have the potential to make this game very difficult if not impossible to complete on one token. Also, there are secret goals that can lead you to rescuing the members of Aerosmith. Also, music is the weapon. Literally. Your gun shoots CDs at people.

Reception to the arcade game was surprisingly very positive, with praise for the graphics, amount of secrets, and the killer soundtrack of Aerosmith hits. Unfortunately, the home versions did not share the same level of success, with numerous sources panning them for their poor graphics and controls, and for generally being a poor version of the game. The PlayStation port is generally considered to be the worst version, appearing on many “Worst Games of All Time” lists, and receiving a 1/10 score from IGN.

While this isn’t a rhythm game, there’s still a relatively large collection of music. The setlist was composed almost exclusively of loops Aerosmith music, with the arcade and home versions differing slightly. Each level would be scored by a different Aerosmith classic, as well as easter eggs like having an elevator music version of Love in an Elevator playing when you enter an elevator.

Of the 8 songs featured in Revolution X, 2 are currently playable in Rocksmith Remastered for a grand total of 25%, which places this firmly above the other major Aero-centric title Guitar Hero: Aerosmith!

Here’s why we’d really like to see every other song from this game appear in Rocksmith Remastered!

A total fan favourite, and one of the first major hits in their late-80s comeback era, Dude (Looks Like a Lady) features an absolute banger of a guitar part that would be a great party track whenever you bust Rocksmith out.

If its appearance in Rock Band 4 is anything to go by, this guitar part is intense. Filled with solos, tricky patterns, and massive riffs, there’s nothing about this song that wouldn’t be absolutely fantastic to play in Rocksmith!

One of the last few notable Aerosmith songs that’s never been in a rhythm game, and frankly, it’s a crime we’ve never seen this one pop up. There’s some great fast paced riffing going on in here that would be an absolute blast to play, and the back and forth play between Joe Perry and Brad Whitford would be great to do with a friend on rhythm guitar!

Aerosmith – Love in an Elevator

Arguably Aerosmith’s most well known song from the 80s, Love in an Elevator is a stone cold classic. Another strong riff based song with a ripping solo, this would be a great addition to the Rocksmith library.

When people talk about classic slide guitar songs, for me there’s one that stands above all of them. And if Rocksmith were ever to implement slides properly in to the game, this is the song that should be released along side that thanks to its great sliding part that goes throughout the whole track.

Aerosmith – Toys in the Attic

It’s somewhat of a deep cut, but it would be incredible to play in Rocksmith if it’s appearances in GH:A and Rock Band 4 are anything to go by. Super fast paced and complex, this would be a great challenge to any guitarist in Rocksmith.

I want it all and I want it now.