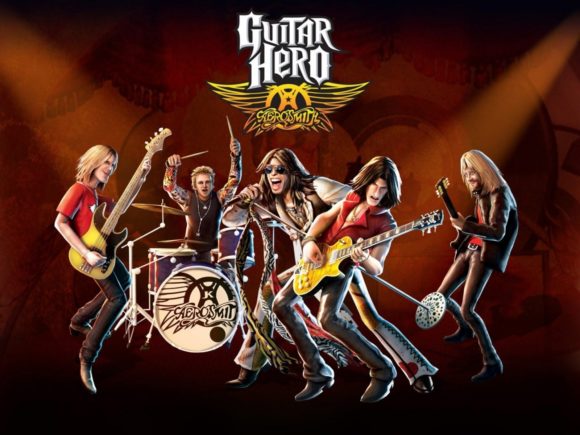 The Guitar Hero franchise had already been spun-off a couple times by this point with Guitar Hero Encore: Rocks the 80s and Guitar Hero: On Tour, but neither game managed to really capture the masses. That changed with Guitar Hero: Aerosmith, which has generated more money for Aerosmith than any one of their albums.

The game was a success financially, although a lot of the reviews were more average, with the big criticisms being that the setlist was much smaller, especially for a full priced title, as well as the lack of real difficulty compared to Guitar Hero III.

The game itself is largely just a re-skin of Guitar Hero III with (real world) Aerosmith themed venues like Max’s Kansas City, The Rock and Roll Hall of Fame, and their first ever show at Nipmuc High School.

It would take years before Aerosmith would ever appear in another rhythm game due to the (presumed) exclusivity between Aerosmith and Guitar Hero. Following the release of this game we didn’t see Aerosmith too much in Guitar Hero, either. The only appearances of their music in the franchise following this was a single song in Guitar Hero: Smash Hits, a three pack of GH:A songs as DLC for Guitar Hero 5, and Cryin’ in Guitar Hero: Warriors of Rock. The exclusivity was officially over in January 2013 when Rock Band 3 received 6 songs as DLC. Later on in the year Rocksmith 2014 would receive Walk This Way as an on-disc track, followed shortly by a five pack of DLC.

As the name implies, there’s a lot of Aerosmith in this game. Although it’s not a complete Aerosmith collection as the 2008 version of Oscar, and presumably many others, had expected. In reality, the main setlist is only around 60% Aerosmith music, with the rest of it being taken up by guest acts of importance that were personally selected by Aerosmith like Run-DMC and Mott the Hoople.

The total setlist consists of 40 songs (plus a Guitar Duel that we haven’t included here for obvious reasons), 25 of which are by Aerosmith (or Run-DMC ft. Aerosmith), and another 3 from Joe Perry’s solo career. Of that 40 song setlist, a measly 4 songs are currently playable in Rocksmith, for a total of 10%. That’s by far the lowest percentage we’ve seen to date on Setlist Sunday.

As the setlist in Guitar Hero: Aerosmith was largely Aerosmith based, it’s impossible to not reflect that when talking about what we’d like to see in Rocksmith. Essentially, here’s our picks for “Aerosmith Song Pack II”, and five guest songs we’d like to see:

Aerosmith – Back in the Saddle

Definitely put this one in the category of “should have been in the first pack”, Back in the Saddle is one of the most beloved Aerosmith tracks. Featuring a great riff throughout (an overarching theme with Aerosmith songs) and a great solo, this one is sure to be a blast to play.

Aerosmith – Livin’ on the Edge

Aerosmith’s 90s output was very important in not only being their comeback after falling off in the 80s, but also put them in to a mainstream level they hadn’t seen before. Livin’ on the Edge is the only representation from the Get a Grip album in Guitar Hero: Aerosmith, but there’s still a really fun guitar part in there that would be really good for Rocksmith.

Aerosmith – Love in an Elevator

Arguably Aerosmith’s most well known song from the 80s, Love in an Elevator is a stone cold classic. Another strong riff based song with a ripping solo, this would be a great addition to the Rocksmith library.

A fan favourite from their first album, Mama Kin is yet another fast paced track with a great riff behind it that would be a blast to have in Rocksmith.

Aerosmith – Toys in the Attic

It’s somewhat of a deep cut, but it would be incredible to play in Rocksmith if it’s appearances in GH:A and Rock Band 4 are anything to go by. Super fast paced and complex, this would be a great challenge to any guitarist in Rocksmith.

How on Earth did we never get more Cheap Trick? They’re one of the greatest power pop groups of all time, and I may even go so far as to say one of the best rock bands ever. Dream Police would be a great place to start with a Cheap Trick five pack.

The Cult – She Sells Sanctuary

Just think of the tones we’d get out of this one. She Sells Sanctuary has a great atmospheric feel to it but there’s a level of intricacy associated with it that would make it really interesting to have.

Mott the Hoople – All the Young Dudes

We’ve talked before about how much we’d like to see more David Bowie, but this Bowie penned classic from Mott the Hoople would also be incredible to see. It’s not the most complex song in the world, but it’s a great laid back tune that would be a blast for beginner guitarists.

Proto-punk pioneers New York Dolls have never appeared in a rhythm game after this cover version of Personality Crisis. Presumably it’s due to master issues, but as we’ve said before in these articles, fortunately that’s not an issue for Rocksmith. so it would be great to see this hugely influential group in the game.

I’d incorrectly mentioned that there was no rap music in Rocksmith when I talked about the Beastie Boys (how could I ever forget RapScallions), but MAN is that an under represented genre. Run-D.M.C. would be a great jumping off point for the genre with how heavily guitars feature in their music.

There’s our picks, what songs would you like to see from Guitar Hero: Aerosmith end up in Rocksmith 2014? Let us know!

First off, rap is an extremely underrepresented art form in Rocksmith. With so many great basslines played by Mike Elizondo over Dr. Dre’s production, the frequency of guitars used by Run DMC and the Beastie Boys and the idea that we could actually kill to birds with one stone by having music from either A Tribe Called Quest or Stetsasonic (Representing both Rap and Jazz) the genre is sorely missed.

As for the Guitar Hero Aerosmith, this disc is the single biggest reason I continue to slam Van Halen on that piece of crap Guitar Hero game they came out with. (Add to that, the fact they are now working with Harmonix but haven’t shown love to Ubisoft)

What I liked so much about GH Aerosmith is that it’s also a history lesson. You go on a journey with the band, see some of their peers and their influences. You start with their performances in high school and move on through their growth as a band. In a way the bands separation is addressed as well by having some songs by Joe Perry.

Van Halen has a history that they should have addressed as well. Every incarnation of the band has had good music. (EVH, take the damn skirt off and get real with it.) I won’t get into the details as there are WAY TOO MANY negatives about their GH disc to mention.

Aerosmith’s Guitar Hero disc was near perfect. (Slash is a big fan of Joe Perry so something by him would have been nice and also I missed the song “Last Child”. That song shows it isn’t just Steve and Joe writing the hits.)

From Aerosmith :
-- Livin’ on the Edge
-- Love in an Elevator
-- Mama Kin
-- Pink (even if not my favourite, I really loved the whole “Nine Lives” album)

From the rest of the list :
-- Lenny Kravitz ft. Slash : Always on the Run

I’m the only who loved the re-recorded version of movin’ out? that song sounds amazing to play and is my first must-have. Also would like to see make it. P.D. it’s me or the first aerosmith pack had a terrible song choice

I would like to see Livin On the Edge, Love in an Elevator, Toys in the Attic, Back in the Saddle and Mama Kin as well.

I would also like to see The Cult, Cheap Trick, and Run-DMC songs make it to RS.

The Aerosmith tracks listed are more limited than I would have thought. I also didn’t know until recently that these Guitar Hero artist games had other artists on them.

I’d vote for Living On the Edge, Love In An Elevator, Rag Doll, Train-Kept A Rollin.