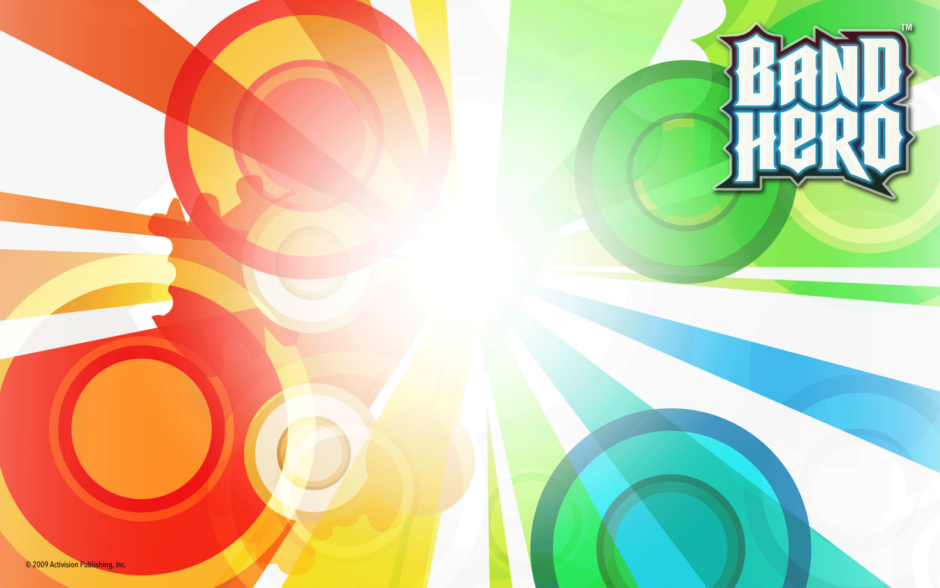 The Guitar Hero train kept on rolling through 2009 with yet another side game. This time, however, the focus was almost completely off of the rock music seen in previous Guitar Hero games, instead having a more pop oriented feel designed around vocalists. This was reflected in the name Band Hero.

As far as new features are concerned, there was nothing of note added from Guitar Hero 5. Despite this, critical reception wasn’t bad with most of the reviews saying that it was still the solid game that Guitar Hero 5 offered, but with a smaller selist.

Similar to previous entries in the Guitar Hero series, famous musicians gave their likeness and did motion capture work in order to appear in Band Hero. The celebrities used this time were Adam Levine of Maroon 5, Taylor Swift, and the entirety of the band No Doubt.

Unfortunately, as with Kurt Cobain in Guitar Hero 5, the usage of celebrity likenesses backfired due to the ability to use them outside of their own songs (which could create moments like this). The first act to sue was No Doubt, who were outraged when they saw Gwen Stefani’s avatar singing Honky Tonk Women. Then a little bit later Adam Levine followed (law)suit.

As mentioned before, the setlist itself focused on big hits and more pop oriented acts like Spice Girls, Lily Allen, and Robbie Williams. The size of the setlist was also considerably smaller, featuring only 65 songs compared to Guitar Hero 5’s 85. Of the 65 songs in the game, only 13 are currently available in Rocksmith 2014 for a total of 20%. That unseats Guitar Hero 5 as the 4th lowest percentage we’ve seen thus far on Setlist Sunday.

The setlist was very divisive, but for me personally it’s one of my favourites. Narrowing it down to 10 songs was super hard, but we did it. Here’s what we’d like to see show up in Rocksmith:

Personally, I just really want to learn the bass riff at the beginning. The Bravery are an awesome band, and we’ve mentioned before how much we’d love to see them in Rocksmith one of these days.

Cheap Trick – I Want You to Want Me (Live)

Normally I’m against live versions of songs showing up in Rocksmith because the learning aspect, combined with the lack of need for masters, means that the cleaner studio versions are preferable. For I Want You to Want Me, however, the Live at Budokan version (which is not the version in Band Hero) is absolutely the one that should show up in Rocksmith due to how much more iconic it is. Plus, the fact that only one Cheap Trick song has shown up in Rocksmith is an absolute travesty that needs to be rectified as soon as possible.

Culture Club – Do You Really Want to Hurt Me

I didn’t take guitar lessons very long, but I’ll always remember when I took my first lesson my teacher asked me what kind of music I’d like to learn. I’d mentioned that I wanted to learn stuff my Wham!, Tears for Fears, and Culture Club. While he told me that Wham! sucked and didn’t have any decent guitar parts, Tears for Fears and Culture Club both actually had really good guitar going on. Do You Really Want to Hurt Me will always have sentimental appeal due to it being the first song I ever learned, and I’d love to re-capture that magic again in Rocksmith.

It’s David Bowie. Stevie Ray Vaughan plays guitar on it. There’s really nothing more that needs to be said. Come on, Ubisoft! When is that Bowie song pack going to finally come out?

Hinder – Lips of an Angel

My favourite song about infidelity this side of O.P.P., Lips of an Angel is a perfect time capsule of what rock music was a decade ago. It may not be a super complex song, but it’d be a great song to just have in your repertoire to bust out when you need to impress someone who may not actually know what the song means.

Now, you may not instantly think of Janet Jackson when you think of great guitar parts, but Black Cat contains that in spades. A proper 80s hard rock song, it’s absolutely filled to the brim with rip-roaring solos that are sure to give guitarists a challenge. In fact, the radio edit version of the song even features guitar work from Nuno Bettencourt.

Marvin Gaye – I Heard It Through the Grapevine

Soul music is criminally under-represented in Rocksmith, and a perfect way to get more of it would be the return of Marvin Gaye. I Heard It Though the Grapevine has a wonderful laid back vibe that would make it a great late night bass track while still having enough going on to keep you on your toes.

No Doubt – Just a Girl

It’s amazing that No Doubt didn’t get a five-pack the first time around. I had to check and double check that we didn’t actually already have this track. One of No Doubt’s most beloved tracks, Just a Girl features some fun guitar work and would surely provide some cool new tones.

Pat Benatar – Love is a Battlefield

It’s no secret how much of a Pat Benatar fan I am. She’s one of the best rock singers of all time, and Love is a Battlefield contains some really interesting instrument parts that would be a blast to play in Rocksmith. Besides, she rocks. Just ask JD.

In addition to being a critically acclaimed series on the USA Network, Mr. Roboto is also a classic 80s song by one of the best prog bands ever. Maybe it’s not the most technically challenging song in Styx’s repertoire, but there’s enough fun stuff going on that it would make a great mid-tier track for new guitarists to show off their skills.

I don’t care if there is no/barely any guitar, I want to play this…

Taylor Swift – You Belong with Me

There’s our picks, what songs would you like to see from Band Hero end up in Rocksmith 2014? Let us know!

“If You Could Only See” by Tonic is one I’d like to see make Rocksmith.

Just saying, I have no recollection of being in that recording of Low linked in this article.

God did I really play that much guitar hero with elison? lol

Also, packs from the Bravery and OKGO would also be pretty sweet probably.

A pack from the Kooks could be pretty fun, Sofa Song has a nice groove, and Is It Me has a spastic solo that’s probably a lot of fun to play. And Junk of the Heart has a lot of interesting chords.

(I’ll request them next time I use the app.)

BTW, every single one of these songs sucks, especially YMCA, except for I Heard It Through The Grapevine which is OK.

I don’t understand. I was told that it was fun to stay at the YMCA, over and over and over again, lol. I think anyone who was alive and listening to the radio at the time it was released will agree with me that they never need to hear that song ever again.

Believe is in B major, Dorian mode (Db Dorian), I believe. Checked some covers and it seems that everybody (all 3 of them) is playing something based on Eb Db Bb Ab F. What small glimpses I can get of the bass player’s hands seem to support that suspician. Also sounds right.

Wow, those are good songs. Roy Orbison is my first and, for emphasis, only pick.

I agree with all of taylor swift, love story is a lot of fun on guitar

I’d like to see “Heard it through the grapevine” and “Naive” for Rocksmith the most out of those.

This is the most underrated Hero setlist. So much goodness.