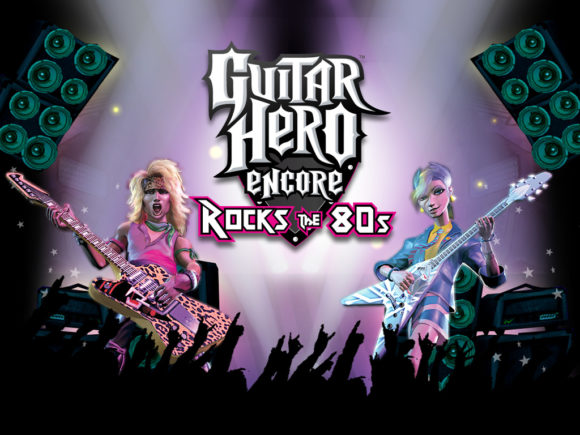 As the name would imply, Guitar Hero Encore: Rocks the 80s featured an almost exclusively 80s soundtrack (the exception being Because It’s Midnite by parody band Limozeen). As would be standard with the Harmonix developed Guitar Hero games, the majority of the songs were cover versions. At 30 songs, it matches the first game in the series in terms of setlist size, although with no bonus songs to beef it up, it winds up being one of the smallest setlists in franchise history.

And now, here’s a bunch of songs I’d personally like to see show up in Rocksmith!

You’ve been following this feature long enough to know that if there’s a hardcore punk song to feature here, I’m going to feature it here! Police Truck would be a great place to start for getting Dead Kennedys in to the game!

Oingo Boingo – Only a Lad

We had our first taste of Oingo Boingo last Halloween, but more would always be welcome! This song was notable for being deceptively difficult, and I see no reason why that wouldn’t be the same here. A lot of interesting techniques are at play here that would be a blast to learn.

Previously, I would have thought this to be impossible what with the lawsuit filed against Harmonix and all, but it was recently announced that The Romantics are coming as Rock Band DLC this month, hope has returned that one of the greatest pop-rock songs of all time could finally come to Rocksmith!

One of THE best hair metal ballads ever, the only reason we haven’t seen these guys show up in rhythm games again (barring Guitar Hero: On Tour, also as a cover) was because of master issues. With masters not being an issue at Rocksmith, there’s no reason we can’t see this song come to Rocksmith soon!

A guitar part almost as fast and tricky as the vocal line, this song would be an absolute blast to try and keep up with. Despite not sounding overtly complex, a lot happens in it and it’s sure to keep even veteran guitarists on their toes!

There’s our picks, what songs would you like to see from Guitar Hero Encore: Rocks the 80’s end up in Rocksmith 2014? Let us know!

we have Golden Earing version of Radar Love. we’re confirmed to be getting Lonely is The Night by Billy Squier in Tuesdays 80s mix pack. let’s see if we get another song from this game in the 80s mix V pack

Radar Love would be a nice addition. Dead Kennedys would NEVER pass the censors. NEVER.

I would kill for more 80’s and New Wave in general… how about The Sounds?!

Electric Eye by Judas Priest is sweet…wouldn’t mind turning circles, victim of changes, or turbo lover in a pack…so many JP tracks I would love. More Cure would be cool…Hot, hot, hot maybe?

Skid Row definetly needs a whole pack 18 and life along with another of the greatest hair metal ballads “I remember you” also Youth gone Wild, Slave to the grind, and Monkey business! Piece of me would make it a great six pack but that prolly won’t happen.

I’m mostly indifferent to this setlist. Wouldn’t mind seeing Wrathchild, Only a Lad, Police Truck, Los Angeles, and Electric Eye make it to the game though.

People hated GH80s but to me it has always been a favorite.

My favourite setlist too! I’m super happy to finally have “Play With Me”, from the remaining titles here is what I hope to see someday :

The best guitar hero setlist by far and have Half the song compared to other!!

Totally agree about Los Angeles, it’s one of the best songs ever.