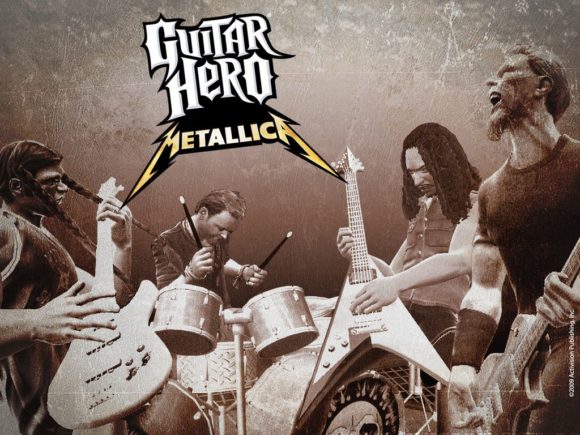 The first proper spin-off of Guitar Hero World Tour would follow in the previously established format of having a band-centric game. This time the focus would be on the holy grail of metal bands, Metallica.

March of 2009 would see the release of Guitar Hero: Metallica. As the name implies, the setlist has a heavy focus on the music of Metallica, although like the previous band-centric game, Guitar Hero: Aerosmith, it’s not entirely made up of Metallica music, with a good 42% of the tracks being from guest acts hand chosen by the group like Slayer, Mastodon, and Suicidal Tendencies.

While the game was mostly just a re-skinned version of Guitar Hero World Tour but with Metallica-centric (real world) venues like the Hammersmith Apollo, Donnington Park, Tushino Airfield, and The Stone Nightclub, a brand new feature was introduced here in Expert+ mode for drummers. To fully capture the feeling of Metallica, Expert+ allowed for the usage of two bass drum pedals and would fully chart songs with double bass pedal.

In addition to the standard Metallica characters, players could unlock costumes that are based on the 80s versions of the band (with Robert Trujillo’s outfit being based on his days in Suicidal Tendencies), and another one that turns the band in to zombies. Also playable is Metallica crew member Zach Harmon, Motörhead bassist and singer Lemmy, and Mercyful Fate frontman King Diamond (with his makeup altered with input from Diamond himself to not offend religious groups). Notably absent was original Metallica bassist Cliff Burton (not put in out of respect to Trujillo), late 80s and 90s bassist Jason Newsted (see above), and founding member Dave Mustane (not put in for VERY obvious reasons).

Reception for the game was actually quite positive, with praise going to how new features were added from Guitar Hero World Tour, the high level of difficulty, and the song selection from both Metallica and the guests.

Metallica would never appear in a rhythm game again after this, save for their live cover of Paranoid with Ozzy Osbourne in Guitar Hero: Warriors of Rock. It’s very likely that, even though this title is more than five years old, that they’re still bound by exclusivity considering their appearance in Tony Hawk Pro Skater HD, and the fact that they’ve played many Activision events since the release of GH: Metallica.

Of the 49 songs on-disc in Guitar Hero: Metallica, 7 are currently available, for a total of 14%. Interestingly, despite Rocksmith having no Metallica music, both the number of songs and the total percentage is higher than that of Guitar Hero: Aerosmith (10%), even though Rocksmith has songs from Aerosmith in the game.

Just as we did with Guitar Hero: Aerosmith, for Metallica we’re going to first pick what we’d like to see as our “dream” Metallica 5-pack (well, someone’s dream pack at least because my pack of Fuel, Frantic, King Nothing, Enter Sandman, and that Mercyful Fate medley probably doesn’t line up with anyone else’s), and then we’ll talk about five guest songs we want in Rocksmith.

Also, it’s not in Guitar Hero: Metallica, but Bleak House’s Rainbow Warrior would be great to have in a rhythm game and this is the only time I’ll ever get to mention it probably.

Enter Sandman is arguably THE biggest and most well known Metallica song. While it may not be technically complex song in the Metallica catalogue, there’s no way a Metallica pack could be released without it.

Another one of the ballads in the Metallica library, Fade to Black still boasts some great metal riffs and fast solos once the song gets electric towards the end. It’s the best of both worlds and a bonafide classic metal tune.

As far as thrash metal is concerned, it’s hard to get more iconic than the intro of Master of Puppets. There’s perhaps no four notes more instantly recognizable than the first four in Master of Puppets. Combine that with the blistering solos this song features in droves and you have a surefire great Rocksmith track.

Metallica – Nothing Else Matters

The other big Metallica song that really broke them in to the mainstream, Nothing Else Matters is another ballad. Once again, while it’s probably not the most complex song Metallica ever recorded it’s a true classic track and a great one to have in your repertoire.

First appearing in Guitar Hero III as one of the final songs in the game, One is one of the most beloved songs in the Metallica catalogue. While you could theoretically argue that I’ve chosen yet another ballad, it’s filled with tremendously fast playing and rip roaring solos that will challenge even the most adept players.

Bob Seger is criminally under-represented in rhythm games. This laid back classic would be fantastic to learn on a real guitar, and fit in perfectly with our list of campfire guitar songs. The only question would be whether or not we get the Live Bullet version or the original studio version.

While Mercyful Fate may cause a little bit of controversy with some people, there’s no denying that they’re a truly legendary metal band. Evil features some truly great guitar work that would be an absolute treat to play in Rocksmith.

Somehow there’s only been one Misfits song in rhythm gaming history, and while Samhain isn’t quite the Misfits they’re, in my opinion, just as good. Mother of Mercy would be a great place to start with finally seeing Glenn Danzig get in to Rocksmith.

I couldn’t have been more ecstatic when we finally got a pack of Social Distortion in Rocksmith, but there’s so much more that we haven’t gotten. This, Prison Boung, I Was Wrong, and their covers of Ring of Fire and Under My Thumb would make for a fantastic second pack. Maybe throw in Mike Ness’ Misery Loves Company for good measure.

Suicidal Tendencies – War Inside My Head

As a rule of thumb on these Setlist Sunday posts, if there’s a hardcore punk song to talk about, I’m going to talk about it. War Inside My Head leans a bit more on to the thrash metal side, but that just means that you can expect great blistering fast gameplay and great guitar work. And that’s to say nothing of the great bass part…

There’s our picks, what songs would you like to see from Guitar Hero: Metallica end up in Rocksmith 2014? Let us know!

I’m probably the one person who is perfectly fine with no Metallica. I do want to see a number of the other songs though:

Just like to point out -- you are not the only person.

“Of the 49 songs on-disc in Guitar Hero: Metallica, 7 are currently available”

Nice setlist. But IMO its impossible to make a crappy Metallica setlist lol. I like that you included stuff from every album.

This is like a cruel joke. Let’s all talk about how awesome it would be, but never gonna get it. Shall we talk about some Zeppelin next?

We discussed very heavily internally whether or not to do Guitar Hero: Metallica and ultimately we decided that, because there are guest acts and we can potentially get those, we would do it.

Zeppelin has never been in a music game though…

I think the tease is the issue. As soon as one arrives to the Riff Repeater page, BAM METALLICA!!!!

While they’re on that list of “Never Gonna Sees” with Zeppelin, VH, and Beatles there’s a small ounce of hope the we’re all wrong. Maybe it can happen.

That initial reaction, “Oh!!!…..no wait this isn’t right.” makes it feel like a cruel joke.

Not a big Metallica fan, but I understand.

Was wondering when this setlist would appear. ?
If 1 day ubi are
Lucky enuff to get metallica in rocksmith is imagine it would be same as jimi hendrix and b 12 pack at least if not more. Or even under the exspansion part they have never used.
How cool 30pack with new related achievements. F/c master of puppets 50GS ?

Mercyful Fate and or King Diamond, The Sword, Kyuss, Diamond Head, Judas Priest and Corrosion of Conformity, please. Also I’ll take Danzig, Misfits, and Samhain anyday. And my dream 5-pack (not exclusive to this game) of Metallica in order of most wanted
1. Ride the Lightning
2. Damage Inc.
3. …And Justice For All
4. Seek and Destroy
5. Blackened

Never played this game, but I can’t believe they excluded the song “Ride The Lightning.” Seems like a big missed opportunity. Metallica is probably my least favorite of the big four (Anthrax, Megadeth, Slayer, Metallica), but I’d still love to see them in this game one day. Some of their songs are really great.

Interesting. I didn’t know, but that may explain why I like that song more than most other Metallica songs, lol. Looking at it again, it actually almost sounds more like a Megadeth song (aside from the singing).

The Black River is so good though!

The Black River aint bad and I respect the sword but I do not care for mother of mercy. I don’t why they would make a band specific game and only have about a quarter of their songs I would’ve liked to see.

Orion! (Assuming this is not a trick and I am actually allowed to speculate on metallica coming to rocksmith). Lol

Speculate away!
It’s not a trick, we promise lol

I’d like to see something from S&M, like No Leaf Clover, -Human, or the symphonic versions of Call of Ktulu, One and For Whom the Bell Tolls