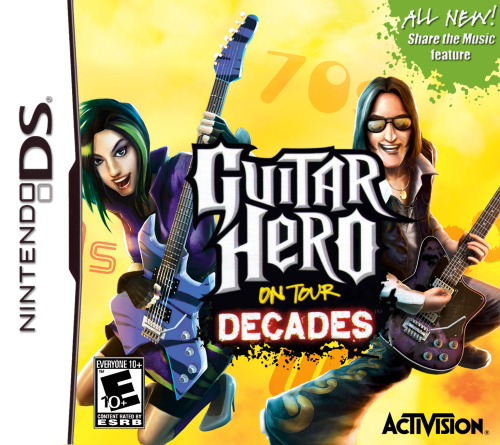 The first Guitar Hero On Tour was decently successful and for all intents and purposes a good way to play Guitar Hero on the go. That, combined with the might of the Guitar Hero brand by the end of 2008, was more than enough to warrant a sequel.

In November of 2008, we got just that with Guitar Hero On Tour: Decades. As the name implies, the idea behind the game is that each venue is themed around a different decade, with the 70s, 80s, 90s, 00s, and “modern” tiers. This meant that as opposed to the traditional way of having each set get progressively harder, progression was now made by going further and further back in time.

While On Tour was relatively well liked, On Tour: Decades was heavily criticized for not improving on any of the features from On Tour, still having very poor sound quality, and the game still causing a lot of hand cramping.

One of the biggest criticisms, however, was thrown at the Guitar Hero brand itself, as within six months we’d seen Guitar Hero: Aerosmith, Guitar Hero On Tour, Guitar Hero World Tour, and Guitar Hero On Tour: Decades all be released as full priced titles. This can be seen as the beginning of the over-saturation of the brand, although we’re still well away from what 2009 would bring…

A feature that Decades was praised for, however, was the “Share the Music” feature, which allowed players of both On Tour games to play against each other with a combined setlist from both games. While you couldn’t save the songs as an export once you disconnected, it was still great that you could easily play both setlists without having to switch cartridges.

Due to the fact that Decades was released so closely to Guitar Hero World Tour, a substantial amount of its setlist is shared with that game’s. They were as follows:

As with On Tour, the setlist varied from region to region, with North America and Europe each having 7 exclusive songs in their 28 song setlist. Once again, convenience purposes we are consolidating the two setlists in to one 35 song list.

Of the 35 songs in GHOT: Decades, you can currently play 17 in Rocksmith 2014 for a total of 48%. This number is significantly up from On Tour’s 38%, and the second highest total percentage behind Rock Revolution’s 51%.

NOTE: The Darkness’ “I Believe in a Thing Called Love” is only available as part of the Rock Singles Song Pack.

Here are a few songs from the setlist we wouldn’t mind seeing appear in Rocksmith.

Well, if we can’t get the original this cover will suffice. Also it’s got some killer riffs! Rock Band got it after all…

One Way Or Another – Blondie

We could always use more Blondie, and you know the bass line is catchy as well.

Nobody is ever going to complain about more Boston right? In any event this track is sorely missing from Rocksmith and I hope that changes soon!

The Take Over, The Breaks Over – Fall Out Boy

I know how a lot of you feel about bands like Fall Out Boy, but this is a really well written, catchy song with a fun to play riff. It even has a pretty great sounding solo care of features two guitar solos performed by guest guitarists Ryan Ross (formerly from Panic! at the Disco) and Chad Gilbert (from New Found Glory).

Honestly I would trade the whole five pack for this song…

There’s our picks, what songs would you like to see from Guitar Hero On Tour: Decades end up in Rocksmith 2014? Let us know!

Didn’t realize that Guano Apes had a song in a GH game.

There’s some really diverse stuff on the On Tour setlists. One of the games contains by far the best Sublime song ever licensed for a music game

Sammy Hagar. Ha! That song is such a… Je ne sais quois… Moving violation in the annals of bad boy rock?

Boston and RHCP for me. Middle and the Smooth cover, I’d take those.