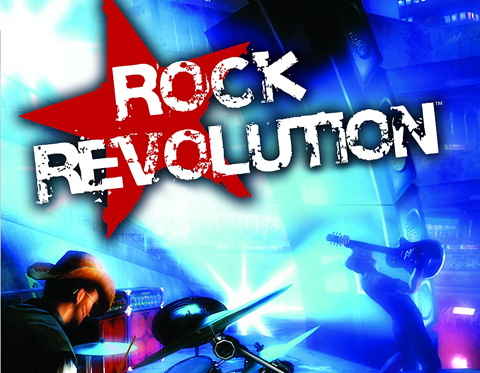 Up until now, Activision’s Guitar Hero series and ex-Guitar Hero dev Harmonix’s Rock Band series largely dominated the rhythm game scene in North America. What many people weren’t too aware of, however, was that the whole guitar based rhythm game genre was practically created by Konami’s GuitarFreaks series. While GuitarFreaks really didn’t make too much of a dent outside of Japanese arcades, the newfound success of the genre in North America prompted Konami to get in the ring in 2008 with Rock Revolution.

Feature wise, guitar, bass, and drums were playable. Vocals were excluded because they didn’t want to compete with their own Karaoke Revolution franchise. The drum kit was also somewhat infamous for featuring six different pads and a foot pedal all arranged in a pattern that didn’t quite make sense to a lot of players. On the Wii version, rather than plastic instruments, players would use the Wii Remote and Nunchuk in a way similar to that of Wii Music.

The career mode featured some fairly standard “play these songs to pass” progression, although there were some unique ways of playing some of the songs. Things like having to play passages of songs without seeing the notes, not being able to miss anything, or having “poison notes” that can’t be played. Once all the songs in a tier were completed, you could select 3 or 4 from that set to make up your album, which would then be performed live.

The setlist featured 41 songs, and in what was already a bit of a throwback, all but two of the songs were in house cover versions. The quality of these covers was one of the many things that were criticized about Rock Revolution, especially the ones for Chop Suey!, The Spirit of Radio, and Won’t Get Fooled Again.

In addition to the on-disc setlist, there were two packs of DLC and two free singles. Most of the music consisted of songs from other Bemani rhythm games, but five of the songs were covers of Pantera. The songs were 5 Minutes Alone, Cemetery Gates, I’m Broken, Mouth for War, and This Love. Of that pack, only Cemetery Gates is currently available in Rocksmith 2014.

Of the 41 songs in Rock Revolution, an impressive 23 are currently playable in Rocksmith 2014 for a total of 56%. That is by far the largest number we’ve seen thus far on Setlist Sunday, beating out previous record holder Rock Band (2007)’s 45%.

* Indicates a cover version of the track.

Rock Revolution might have been released to very poor critical reception, but the setlist was still really great when it all comes down to it. With that in mind, here are the ten songs from this setlist we’d like to see:

The pop punk princess hasn’t appeared too much in rhythm games, with her only other appearances been in the Guitar Hero DS games and on Guitar Hero Live. Sk8er Boi would be the perfect place to start to get Avril in Rocksmith Even though it might not be the most complex song in the world, it’s one of the most notable tracks from the early 2000s pop-punk boom.

Breaking Benjamin – The Diary of Jane

Conspicuously absent from Rocksmith’s first Breaking Benjamin pack, The Diary of Jane is arguably their biggest hit. While it was likely excluded due to the incredibly low tuning, we just got DLC that shows that Rocksmith might finally be able to handle this now. Here’s hoping that it’s not too long until we can finally add this to our libraries!

Dream Theater – Pull Me Under

There’s a little bit of progressive rock in Rocksmith, but nowhere near enough. Dream Theater are one of the most requested bands and there’s no way that a Dream Theater pack could neglect their most well known song. There’s a lot of complex playing going on here that would be a great challenge to even the most adept players.

We haven’t seen too much Dreamboat Annie-era stuff from Heart in rhythm games, save for Crazy on You in Rocksmith, a cover in GH2, and a live version in BandFuse. Presumably this is due to master issues, although Rocksmith fortunately doesn’t need them. Magic Man would be a great place to start with finally getting more Heart in the game!

KoRn – Falling Away from Me

A lot of great atmosphere is on display in this song, as well as a lot of really fun bass playing. While they’d probably have to do some transposing to make the songs fit on six string guitars and four string basses, it would almost definitely be worth it to see some KoRn make its way to Rocksmith!

One of the most badass women in rock history, Lita Ford has yet to make her solo debut in a non-Rock Revolution rhythm game (The Runaways are available in Rock Band, Guitar Hero, and Rocksmith). Kiss Me Deadly is by far her most well known song, and the sweet solo in it is justification enough to get this in Rocksmith now!

Controversial opinion here, but I’d personally rather have the Slade version. With that said, however, the Quiet Riot version would be an absolute ripper in Rocksmith. It’s simple enough for a beginner guitarist to feel comfortable playing, but still features a great solo that would challenge players of all levels.

It seemed for a while that Scorpions just didn’t want to be part of rhythm games anymore, as we hadn’t seen them since Guitar Hero III. Then we saw No One Like You appear in Rock Band 4 and hope to see them arrive in Rocksmith was re-ignited. There’s multiple solos in here and a great riff in general that would be a surefire hit with Rocksmith players.

System of a Down – Chop Suey!

Yet another song that was strangely absent from its artist’s pack, there’s no way that we can get more System of a Down and not get Chop Suey! doesn’t get included. A lot of really fast strumming and complexities would make this a blast to play in Rocksmith.

Whitesnake – Still of the Night

Inexplicably this didn’t get a Pro-Guitar/Bass upgrade when it came to Rock Band 3. I don’t know why it didn’t, but what I do know for a fact is that it was one of the most enjoyable songs they ever put out for Rock Band. A lot of really fun and engaging riffs throughout there and some great solos almost guarantee it would be just as good in Rocksmith.

There’s our picks, what songs would you like to see from Rock Revolution end up in Rocksmith 2014? Let us know!

All I remember about this game was that it had a massive fascination with Pantera for DLC. So yeah, I want Pantera, and Slade, and Scorpions. That’s about it.

I bought this game just for “white room”, lol.

Awesome, lol. If rocksmith got this song I might actually be tempted to put the bass down and take a stab at guitar.