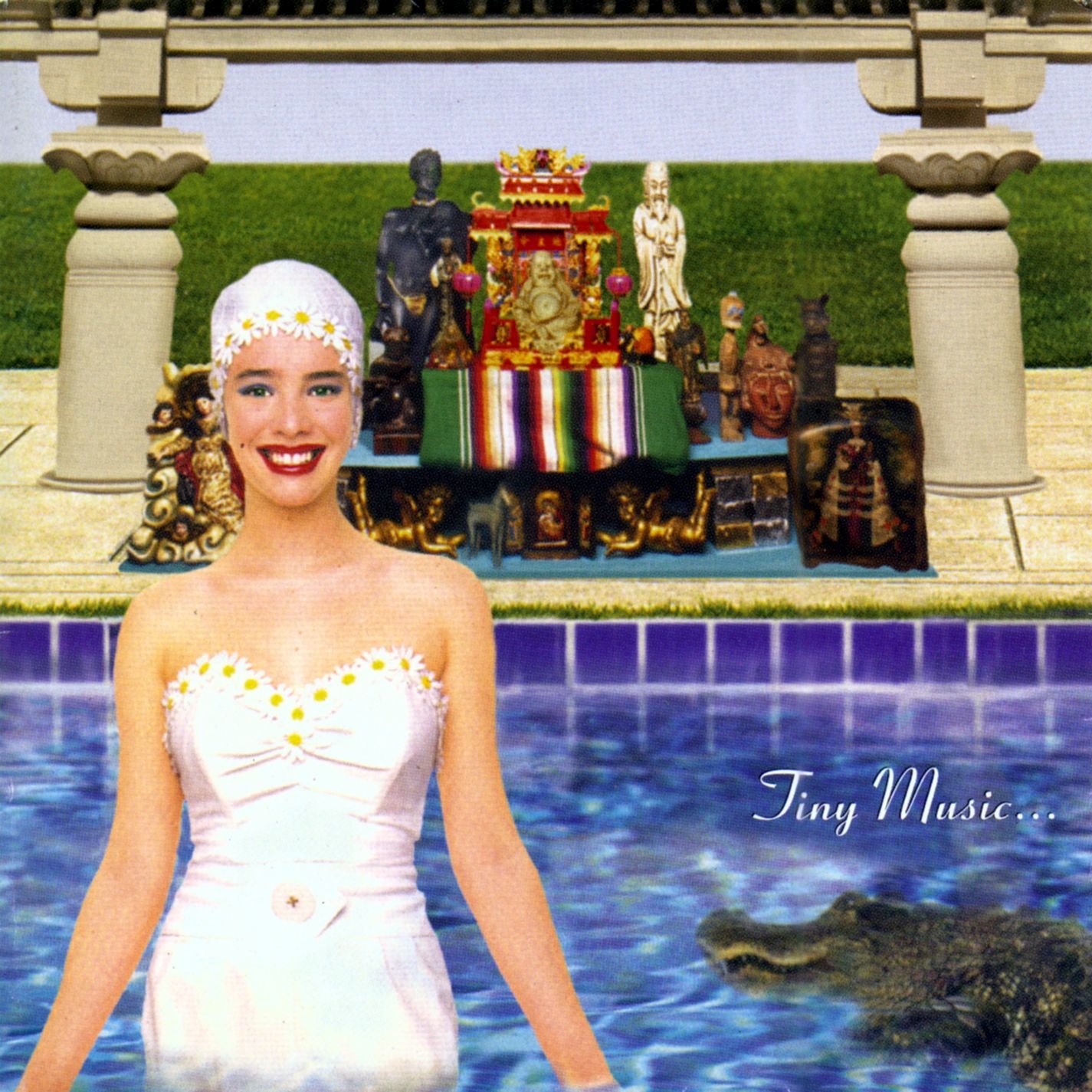 Welcome to February! Today’s clue was posted almost as fast as it was solved, and it seems like we’re getting a song from a very highly rated band we haven’t had DLC from since 2015! 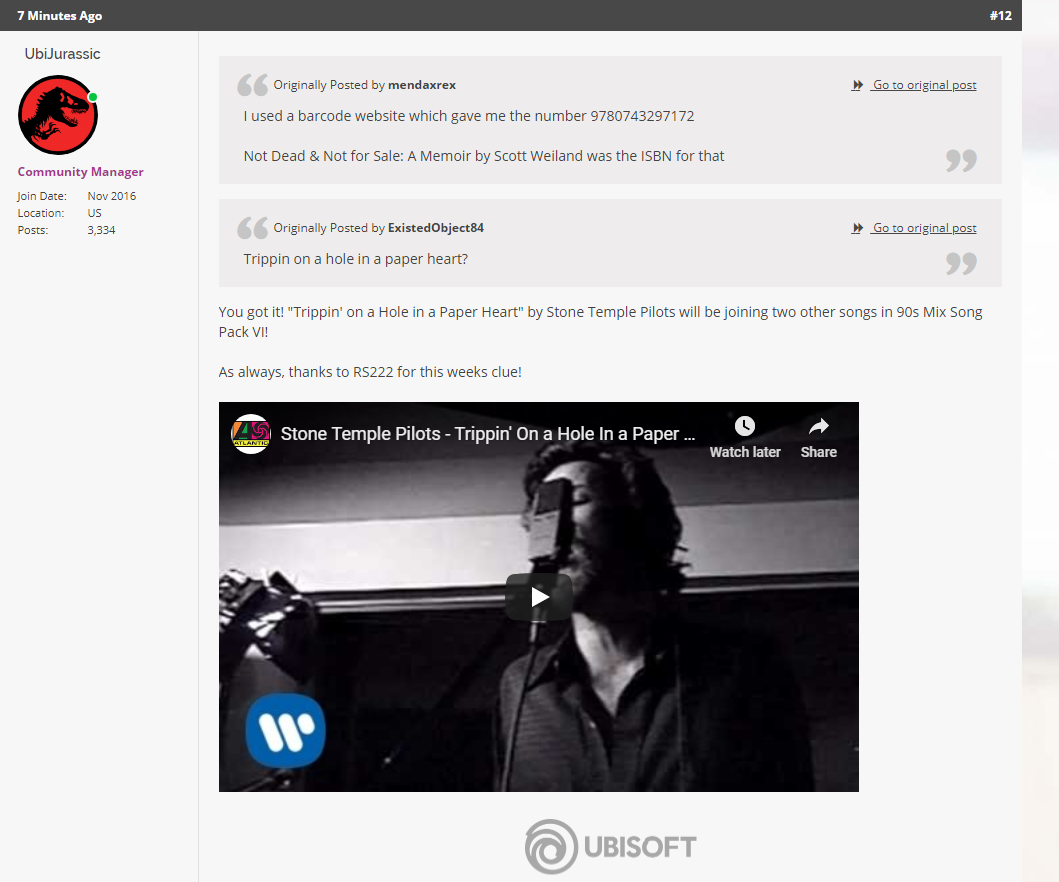 This is the fourth appearance of Trippin’ On a Hole In a Paper Heart in a music game!

This brings us up to NINE total songs from @STPBand!

What other 90’s songs could end up in the sixth 90s Mix Pack?

Please liberate this song from BandFuse

Let’s get something a bit different

Do you know the way?

the tuning for this song is what???

Are you excited for the 90s to return to Rocksmith or are you checking your inbox for this month’s Newsletter for something to get you excited? Let us know!

We've heard you crying loud, so we're bringing a popular song from a familiar band to #Rocksmith in this week's song pack! Don't get lonely now though, because two other artists will be joining them. Come around tomorrow to find out another artist appearing in this week's pack! pic.twitter.com/kBGavelwLq

Awesome! Always down for more STP. Maybe one day we can get “Sour Girl”. For this pack I’m hoping for The Flys “Got You Where I Want You” and Sponge’s “Plowed”.

Although there are other tracks from sponge that might be more to my preference I’m hoping our first song from them is Wax Ecstatic (To Sell Angelina), maybe some other mix or variety pack and put it with soul asylum”s misery and another appropriate track. But I’m good with sponge showing up regaurdless. Maybe we’ll get some gravity kills or machines of loving grace, or the cure’s burn from the crow soundtrack since ubi seems to be filling and rounding things out a bit.

Sour girl and GYWIWY I already requested btw. So I can’t do it again.

All 3 of the crow films have soundtracks with awesome exclusive tracks. I would really love to see a bunch of those added.

Yeah they do; Would really like Hole’s version of Gold Dust Woman from City of Angels; hell let’s bundle that up with Miss World and Doll Parts. “Violet” is one of my most played songs on RS.

Also Teething by Deftones and I’m Your Boogie Man

Yeah who would guess but that is the best version of gold dust woman I’ve heard and on the crow salvation somehow they did it again covering dylan’s it’s all over now, baby blue. I’ve requested both. It would be nice for some more live through this tracks. That is a really good solid album that has held up better than a lot of things.

I actually have a thing for Hank3, but if you never checked it out David Alan Coe and the Pantera boys did an album I really like called rebel meets rebel. Rex is a really good bass player. I’d love to see some of the Hank3 or Rebel meets Rebel stuff get added as well.

Would be great to see Hank III on rocksmith; I’ve requested several of his songs

What were Sponge’s other big songs? “Wax Ecstatic”, “Have You Seen Mary?”, “Plowed” and “Molly”…am I missing any others?

Well yeah actually but I even get done odd ones like death of a drag queen stuck in my head. But I recall, have you seen Mary, was one of the singles. However instead of my recollection and preferences here is a link that will have a quick run down so you can see if there is any you like I may not mention.

Oh damn meant to write a different track and just wrote have you seen Mary cause it popped in my head after reading your post. Once again too little sleep and dyslexia are a terrible combination. Just go check the link and see what you like and forgot. Then you can request it.

Looks like I got Placebo on your mind after yesterday’s stream, Elliott. :p

haha yeah you got me thinking

seriously though, any Placebo track would make so happy. especially Without You I’m Nothing, or Slackerbitch, or I Know.

Would love a pack for them some day -- Every You Every Me, The Bitter End, Taste in Men, Bruise Pristine, Teenage Angst, Without You I’m Nothing, Running Up That Hill, Meds…lots of good possibilites

haha, I hate retuning but i love Placebo more

With so many great 90s songs i just need one to make me happy the refreshments banditos song. Its the perfect guitar song to play not too hard and probably loads of fun

Thinking about 90’s songs brought this one up in my mind…Toad the Wet Sprocket “All I Want”!
I haven’t listened to it in years, but man, I like this song a lot..
now I need to go request it!!!

Hmm the clues for February are as vague as ever so they can apply to a lot of things but, I wonder if “watch out for monsters” could be Bowie’s scary monsters & super creeps. Pretty popular track. Seems possible.

Been waiting to see more from No Doubt (both DLC and a new album, c’mon Gwen). Sunday Morning would be a nice touch.

RATM -- Guerilla Radio or Mic Check or (wishful thinking here) something from RHCP are on my wish list as well.

If we’re to take that word “Mix” literally, I have to say I’m surprised Elliott didn’t insert Ice Cube again. Don’t give up bruh. Would love to see the legendary O’shea Jackson or even DJ Quik step in the room. Mo’ hip-hop is a good thing. Also, still keeping the light on for some Southernplayisticadillacmuzik.

Thank you for mentioning both those rage tracks, Ive requested them but mic check might be their best song. But i really want both those added among some other ratm, or audioslave but have you checked out prophets of rage? Some really good tracks I’d love to see a pack of them added as well.

Mic Check is just ill, only way I can describe it. Happy not to be alone in loving that one.

In many of these artist packs there often seems, at least to me, an essential song left out. (Just a Girl, Sunday Morning, Simple Kind of Life, Bathwater- No Doubt / All Along the Watchtower, Hey Joe-Jimi Hendrix / Running Down a Dream -- Tom Petty / Camouflage, Cliff or Rock City, Me Neither -- Brad Paisley / the live version of No Woman No Cry -- Bob / too many to count -- Chuck Berry as a few examples) Guerilla Radio is that song for me with RATM. (Quick note, even though they haven’t had a proper pack, I’m still confused on how we don’t yet have Magic Man among the other tracks from Heart.

I’ve heard of Prophets of Rage, but haven’t heard them. Will have to take a listen.

For RATM in my opinion those are the 2 most key tracks we are missing I want others as well, Audioslave has multiple missing but doesn’t remind me is top of my list. For PoR radical eyes, hail to the chief, unf-ck the world, legalize me are some of strongest tracks on the album, their version of prophets is good to (of course) but they released a new track called hearts afire that right when you think it’s going to take off just ends. Might be one where they jam out live and go off cause it’s super short. Hope it means a new album is coming. Tom petty there is a lot of tracks missing. Apartment song, you don’t know how it feels, saving grace, down south, you wreck me, honey bee, cabin down below, keeping me alive, built to last, American dream plan b, fault lines, u get me high, last Dj, joe, that list goes on with out even getting into b-sides and rare or deep tracks. And I want some traveling wilbury’s as well. Just a girl is a huge no doubt omission. Chuck berry has so many great songs, maybelline, deuce, bio, Nadine, Memphis Tennessee, reelin’ and rockin’ (that long low down n dirty live chuck version where he wipes it on the wall), woodpecker, jaguar and thunderbird, c’mon (that background singer is Etta James btw), we just need like 60 more chuck tracks. Hendrix besides what you mentioned I need angel, highway child, dolly dagger among some other obvious ones but I’d love some live tracks like sergeant peppers, crawl out your window. But what about some of the fun ones where his sense of humor shows like 51st anniversary, can you see me, little miss strange. I like some of the odd ones… Read more »

Let’s do another No Doubt pack. I’d like to see Hella Good (great bassline), It’s My Life, and New along with Sunday Morning.

Would be so amped to see this cut:
https://www.youtube.com/watch?v=cyWT6BD_0Gk

Oh yes, well overdue for more No Doubt, good call on all songs.

Also like your choice for Outkast. Organized Noise really should get a pack of their own. They don’t get enough credit for the instrumentation they’ve done with the whole Dungeon Family among others.

In fact, Hotlanta as a whole could use more representation in Rocksmith. Would much rather have had the Black Crows vs GA Satellites.

I like the Croweology versions of a lot of the songs better than the original; Luther Dickinson is

Score! I requested that track. I’ll take that placebo track as well if that actually shows up. Hell give me Dave Navarro’ rexall and chris Cornell’s she can’t change me, I’ll be thrilled.

Every You Every Me would be even better IMO
https://www.youtube.com/watch?v=OMaycNcPsHI

Put those two words together, then you get a band we could use some tracks from.

I would be so excited if we got Placebo

It predates it but if you see the video now, am I the only one thinks of the matrix?

You know, I had never seen the video before!

Well you can watch it above. It came out while I was in film school in l.a.. My housemate had cable (something I’ve never done, paying for t.v. is an odd concept to me) and mtv2 world of run pure morning, hole’s celebrity skin tracks, Manson’s mechanical animals (Bowie/ziggy album), monster magnet power trip tracks along with the flys got you where I want you , stp, aic, Lisa loeb and god bows what else, but I kind of took a video culture binge during that time a few times a week so I associate a lot of that stuff together from those images.

We also need a Manson pack II; I’d pick “Third Day of a Seven Day Binge,” “I Don’t Like the Drugs (But the Drugs Like Me),” and “Man That You Fear”