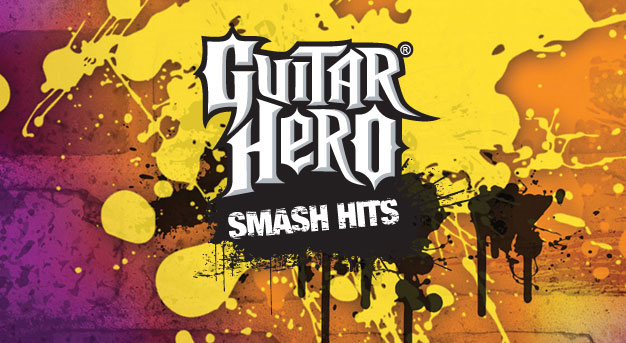 Guitar Hero was still on top of the world in June of 2009, so it made sense that Activision would continue pumping out title after title. Enter Guitar Hero: Smash Hits (Guitar Hero: Greatest Hits in Europe and Australia), the 2nd game in the series released in 2009, and in the eyes of many casual fans the turning point against the Guitar Hero franchise.

Smash Hits featured 49 of the most popular (and obtainable) tracks from Guitar Hero, Guitar Hero II, Guitar Hero Encore: Rocks the 80s, Guitar Hero III: Legends of Rock, and Guitar Hero: Aerosmith, many of which were now appearing as master tracks and, for the first time, playable in a full band setting. Massive artists like Queen, Avenged Sevenfold, and KISS were mixed in with smaller fan favourites like The Sword, Helmet, and Priestess. And of course, no collection of Smash Hits would be complete without the song synonymous with Guitar Hero: Through the Fire and Flames.

The venues in the game were all based on Wonders of the World with players being able to play in the Amazon Rain Forest, the Grand Canyon, Polar Ice Caps, the London Sewerage System, The Sphinx, The Great Wall of China, Atlantis, and Québec City. The idea behind this was that Guitar Hero: Smash Hits would allow you to play The Greatest Songs in The Greatest Places.

Reception to the game was average at best with a lot of criticism being directed at the fact that no meaningful gameplay changes were made from Guitar Hero: Metallica, as well as the fact that the songs were all repeated from other games. In addition, many hardcore players weren’t happy with the re-charting of songs like Through the Fire and Flames (made easier by replacing the HOPOs with tap notes), and Raining Blood (with the closing lightning strike being charted to the series’ first every five note-chord).

The nature of Smash Hits means that it took some of the most well known and beloved songs from franchise history. As such, of the 49 song setlist there are currently a whopping 36 playable in Rocksmith 2014. This gives us 73% total completion, the highest percentage we’ve seen yet in Setlist Sunday.

NOTE: While Smoke on the Water is an original recording, the version used in Rocksmith uses an alternate take of the guitar solo.

Aerosmith – Back in the Saddle

Originally featured in Guitar Hero: Aerosmith, definitely put this one in the category of “should have been in the first pack”, Back in the Saddle is one of the most beloved Aerosmith tracks. Featuring a great riff throughout (an overarching theme with Aerosmith songs) and a great solo, this one is sure to be a blast to play.

DragonForce – Through the Fire and Flames

Originally featured in Guitar Hero III: Legends of Rock, you thought Play with Me was hard? One of the hardest songs in rhythm game history, few songs are as synonymous with the genre as Through the Fire and Flames. And before you think that this wouldn’t work in a game with real guitars, remember that this was available as DLC for Rock Band 3. With Pro-Guitar/Bass. Just imagine how impressive you’d be to your friends if you could bust this one out!

Originally featured in Guitar Hero, fans of Grand Theft Auto: San Andreas may remember this seminal 90s alt-rock track. A live version appeared in Guitar Hero: Smash Hits, although it doesn’t export. Other than that, this song has never re-appeared in a rhythm game. It would certainly be at home rounding off a possible Hit Singles VI…

Originally featured in Guitar Hero II, I know I was disappointed that the recent Jane’s Addiction pack didn’t feature this song. One of the greatest songs Jane’s Addiction ever performed, it’s about time we see this pop up in games again.

Joan Jett & the Blackhearts – I Love Rock and Roll

Originally featured in Guitar Hero, all we have to say is seriously? We’ve had how many “Rock Hits”, “Hit Singles”, and “Women Who Rock” packs and yet somehow we still don’t have one of the very definitions of “classic rock”? Come on, Rocksmith!

Ozzy Osbourne – Bark at the Moon

Originally featured in Guitar Hero, this was the first “final boss” in the series. Bark at the Moon is a rhythm game classic. It appeared again as DLC for Rock Band 3 where it was exclusive to purchasers the Ozzy Osbourne 8-Pack. Hopefully the licensing doesn’t wind up to be prohibitively tricky and we see this song in Rocksmith soon.

Originally featured in Guitar Hero II, this is a great high-level guitar showcase, and would fit in nicely with the player-base who are looking for more of a challenge. Hopefully next time we get a rockabilly pack, we see this make an appearance!

Stone Temple Pilots – Trippin’ on a Hole in a Paper Heart

Originally featured in Guitar Hero II, this was yet another case of “I can’t believe this didn’t make the pack”, especially when you consider this is one of Stone Temple Pilots’ most well known and beloved songs. While recent events may complicate licensing, one can only hope we get more STP in the game, and that this is the first song we get.

Originally featured in Guitar Hero Encore: Rocks the 80s, don’t you think it’s time we get another song from Twisted Sister? While the riff is simplistic, it’s incredibly satisfying and features two great solos by Ojeda/French. If that’s not enough, in 2009 it was named the 17th VH1 Greatest Hard Rock Songs by VH1!

There’s our picks, what songs would you like to see from Guitar Hero: Smash Hits end up in Rocksmith 2014? Let us know!

Mark off Through the Fire and Flames. We got it in the recent variety pack

I think it’s time for Twisted sister to get an entire pack only because if I wanna rock becomes a single then they’ll be a slim to none chance of twisted sister getting a pack in the first place. Also Aerosmith deserves another pack and I know I’ve said it many times before but I’ll honestly take the entire discography of Extreme and maybe a pack of Warrant and the Sword.

Cowboys from hell (live)-Pantera
Psychobilly freakout
Bark at the moon

Bark at the moon no ifs ands or buts, monster riff age in that song! We already have pantera, and I doubt they could get the live version sounding decent, not dissing you, but there has yet to be a live track……….Rs needs more indie artists, some of my fav tracks from rs1 and rs2014 are artists I had never heard of …..example boss by Chris lee (rs1) and snarling of beasts -- Bedowyn

The Riff Repeater probably be hard to tab it out too?

I wouldn’t mind if we got some live tracks personally, some bands are so good live the studio tracks pale in comparison

The Riff Repeater I agree but it would probably be a pain in the a”” to get everything programmed??

yes….back in the saddle shoulda coulda been in the pack

Hoping for danzig… Even though it’s easy rifts

I’ve been commenting on that Joan Jett for a while. You are so right. If there are two basic songs that should be in every guitar game, lesson, or whatever they are