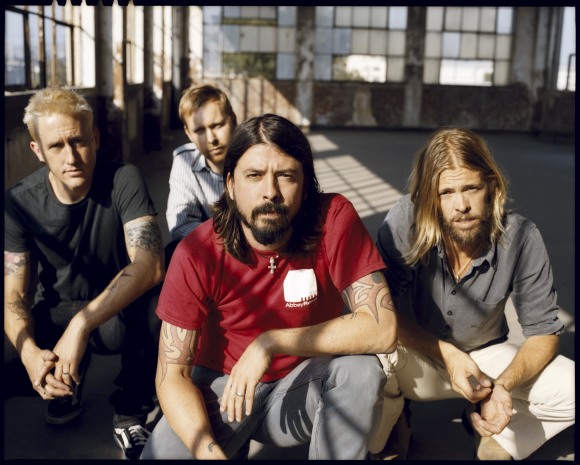 It’s Friday, and the clue has been cracked. It looks like we’ll be getting our first repeat DLC after all!
It started when Dan posted this very familiar image:

Which happens to be the same image used from last week’s DLC clue. The password tompetty revealed another GIF image hidden within:

MentokMindTkr correctly identified it as the actor Michael McKeon from the movie Clue, which Jayrocks cracked using mrgreen as the password. This revealed yet another image:

Those mysterious symbols on the sides turned out to be the Pigpen cipher, which KyleMRob translated as “Pick Two” along the top left and “Name The Band” along the bottom right.

Which two weapons? Obviously the Rope and the Monkey Wrench of course, which Dan confirmed.

Here’s what we’d like to see in addition to the confirmed tracks:

Are you excited for more Foo Fighters? Could we expect to see more repeat DLC packs in the future? Could this possibly coincide with the release of their new album and HBO television documentary series, Sonic Highways? Let us know in the comments below!

@TheRiffRepeater the one that isn’t a Tom petty cover after all! 😉

well it looks like we can cross Monkey Wrench off on the list of Guitar Hero 2 songs in Rocksmith. seriously though more GH2 tracks would be awesome (even though we have so many already)

The Pretender confirmed! awesome! That was the one i really missed the first time round.

If they have any from the new album I dearly hope its Outside, great bass line.

Great news! hopefully like all the dlc I bought and the import pack -- this too will be available on the PS4 before Christmas 2016!!!!!! 😡 😕

I think the last songs will be up, on psn, in June 2018… So soon, you ask? Yes, I have faith in Sony… Oh, and what is it again, the entire month of December where they don’t update their store, or is it just two entire god damn weeks…

Which 4 songs are confirmed? It’s only 3 confirmed so far.

Are we certain it’s “Learn to Fly” and not “Breakdown?” Either seem to fit the Tom Petty cover clue.

Isn’t Breakdown actually a Petty cover? The clue is that the song ISN’T a Tom Petty cover after all.

Nope, they are two different songs. I like both, so win-win in my opinion haha

It’s Learn to Fly then!

By the way, I have just watched the Sonic Highways episode 1 and 2, and it’s a really brilliant show! I recommend it to everybody, not only Foo fans..
A lot of great musicians talking, awesome video footages and Foo’s members memories help you to understand how music evolves, how different scenes emerge, and how you record an album, focusing on one city, one studio and one song of the new album per episode..

could we see any Unearth,All that Remains,Shadows Falls,August burns red or Darkest hour on DLC’s for rocksmith 2014 in the near Feature?

only way is to request them http://bit.ly/rsrequest

there’s a tweet from Paul that ATR is coming eventually though.

Breaking Kitler has confirmed the Pretender. I verified as per UbiSoft SF tweet and posted a pic.

I’m a bit surprised repeat artist DLC are beginning so soon..
there are so much bands we are still waiting to see coming as DLC.
I really hope there won’t be pack .02 too often for now..

and, I’m starting to think the “megahits” DLC for fall and winter, won’t be the kind of things I’m hoping for.
I hope for more bands with their own style and sounds, and less radio friendly..

There’s only 3 DLC packs for 2014 we don’t know yet. Given this 2nd Foo Fighters pack and Jimi Hendrix on the 16th December, only 25th November, 2nd and 9th December are unknown.

Not necessarily, could be Learn to Fly (Learning to Fly is the Tom Petty song)

Foo Fighters good but more Nirvana would be better.

I think we were promised some Utero tracks by Paul Cross… But I’m not sure I remember that correctly… Elliot?

We were but for summer and that’s been over for a while. Maybe it ended up like the Coheed pack.

I’m still waiting for that in utero pack too.. but if it’s for “rape me” and “pennyroyal tea”, it’s not worth it..

What about “These Days” ? I’d love that one.

I think the other 3 songs will be:
Learn to Fly
The Pretender
All My Life

I could fight a little more foo I guess. How many songs have Dave Grohl in them now? Nirvana, Foo, Them Crooked Vultures right? And did he drum in Go With the Flow? I know he did on the Queens of the Stone Age song I want to see on here.

I have bought lots of backs, and an entire album of Foo on Rock Band, and the trend will continue on Rocksmith

I am super excited!

Hope DOA is in the pack.

Not super excited about this pack. Guess I was too busy with NIN, Type O Negative, and Front Line Assembly when the Foo Fighters first came on the scene, as a result the first song pack was plenty for me. Would kill for some FLA, Type O, Sisters of Mercy, or Hypocrisy!

I’d be ecstatic over any of these:

The Pretender
Let it Die
All My Life
Baker Street (fun cover, imo)
Something from Nothing (I expect a new track 100%)

I’m hoping for hey Johnny park amd all my life. I wish they would repeat pearl Jam and rush packs

I’m down for both! There’s not much Pearl Jam in the game, so I’m guessing that’s more likely.

I’d love some Let It Die, but I’m in no matter what.

I think a Dio pack would be pretty good as he is a metal legend.

Hopefully the pretender and rope will be in it. Hopefully they are working on a 2nd Iron maiden pack or a Metallica pack.

A band repeat, when there are so many we still haven’t had yet? I can see why, they are such a popular band, and they have the new album recently released, but there are still so many I would want before this, myself. SO many. Oh well, a lot of people are/will be happy, so good luck to them.

Week 9, still waiting for a challenge in the bass department…

Pretty cool, I’m guessing there will be one from the latest album, and I would love Stacked Actors, it’s my favourite from them ^^

Rope and The Pretender get me going. So much rock band/guitar hero/pro guitar history in those songs, along with the fact that those songs are fucking incredible. Anything else is gravy.

I`m really hoping for All My Life. Always down for some more Foo Fighters anyway.

Also, we could use more Judas Priest.

Hellbent For Leather
The Helion/Electric Eye
Redeemer Of Souls

Beautiful. Make it a 12 pack, though, or at least a 5 pack. There’s more than enough variety.

I would be very interested in seeing a track or two from Sonic Highways in there. If that’s the case, I would really want it to succeed, demonstrate the possibility of cross-promotion, and hopefully give us higher-profile new release DLC in the future.

no thank u we need some NIN, Eagles, and Primus not more foo fighters

While I agree with all three, more foo fighters is cool as well 🙂

Foo Fighters is one of those bands for me where I can understand why people like them, but to me have always seemed a little too radio friendly and middle of the road. Which sucks. They’re a band I’ve always wanted to like but have just never ever clicked for me. It’s too bad really, because Dave Grohl is one of the most interesting, kick-ass dudes currently playing rock & roll today.

Sign me up for some Probot DLC any day of the week though!

i agree with you..
I was a nirvana fan, so after kurt’s death, I was waiting a lot from the foo fighters.. when their first album came out, i bought it, and listen to it, trying to convince me I liked it..
but nope… only a couple of songs are to save, the others are as you say : radio friendly and nothing subversive…

Agree with you totally. I bought their first CD way back when, because I thought it was something I should be into (and maybe out of sympathy a little). It had a couple of okay tracks, but I don’t think I’ve ever listened to it start to finish.

Full respect to them, but they’re just not for me.

Having said all that, Everlong is great, but I’ve already got that one. 😆

Are you excited for more Foo Fighters?

Why? Because they’re not metal?

Me neither -- but to each his own.

Rope
Monkey Wrench
All My Life
The Pretender
Stacked Actors

Hey Elliott, we should do an opinion article called, “Opinion: Bands That Should Get Another DLC Pack.”

I’ve already suggested doing one for him last week before the DLC was announced. I was planning on doing 2 more legacy DLC reviews before then, but I think I could put those on hold.

Rock Band has almost thirty of their songs. Rocksmith has six.

I would like to see Another One Bites The Dust, Tie Your Mother Down, 39, Princes Of The Universe, and Crazy Little Thing Called Love.

i like the foo fighters, but their songs are too bare bones, no riffs or solos, wasted opportunity for a sublime pack 02 😆 😆

You know I suspected for a while that Foo Fighters would probably be the first to get a pack 02. Their history of being very music game friendly, the number of radio hits they’ve had in the last couple of decades that one pack doesn’t begin to cover, and the fact that their first pack is relatively old.

The 2 confirmed songs make plenty of sense, and I won’t get my hopes up for deep cuts or lesser hits, so I’ll predict The Pretender, Learn to Fly, and something from the new album.

Very cool! Even cooler that some other much-loved artists will get additional packs down the line. Always room for more Rush 😉

really hope that Let it die is included.

That would be a great pick! I hope so too!

I hope so three!