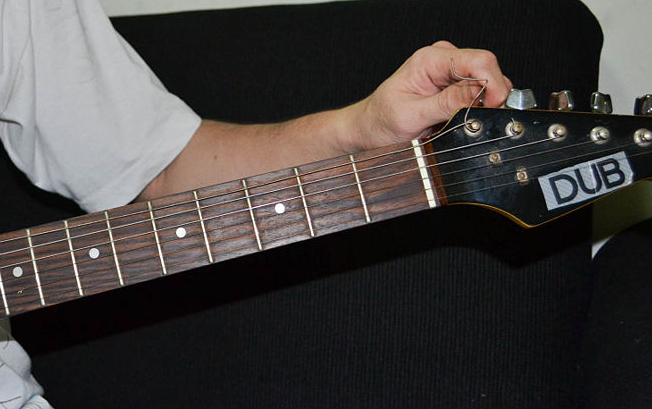 With the addition of this week’s Radiohead DLC, Ubisoft SF have revealed that there is an option available to them to use Custom Tunings. As a result of this we have true tunings for both Optimistic and My Iron Lung by Radiohead. Now that the cat is out of the bag, what are some other bands with alternate tunings that could appear in future downloadable content for Rocksmith 2014?

I first heard this song in a skateboard video called “Welcome to Hell” (google that and you might see a familiar name) I always thought it sounded almost “alien,” would love to play it.

Pavement is a pretty underrated 90s Alternative band, if you might recall Paul had one of their CDs on his desk when I visited Ubisoft SF in 2011. Maybe he was waiting for the tuning options? Pavement has had one song in a music game, in case you missed it.

Did the Goo Goo Dolls use weird tunings because they were bad at playing guitar? Or were they just looking for that distinct sound to differentiate them from the other decaffeinated post-grunge bands they were surrounded by? Either way, Iris is definitely a song that would be fun to learn.

Opeth is definitely up there with some of my favourite bands, I was surprised to learn that the entire Ghost Reveries album was played in Open Dm. This is one of my favourite songs on the album, but really any Opeth would be great, and most of it is in standard.

Let’s get a bit heavier since we are talking about odd tunings, Nile fulfils that for sure. Could the game pick up Drop A though? I guess we have to wait and find out.

I actually had no idea this song was in Double Drop D until I looked into it… Ok, I’ll be honest I had no idea “Double Drop D” was a thing. The more you know right? Neil Young was actually rumoured to be in the first Rocksmith, not sure what happened but let’s fix that soon.

The Melvins “Boris” (Drop A – AADGBE)

We already had a Drop A band, but you can’t talk about drop tunings without giving some love to The Melvins. This song actually inspired the name of the Japanese experimental rock band, Boris.

There’s some variety for you, can you think of other bands that use off tunings that would be welcome additions to the Rocksmith 2014 catalog?

Besides Led Zeppelin of course…

I just realized Open D is supported in the tuning list! D’oh 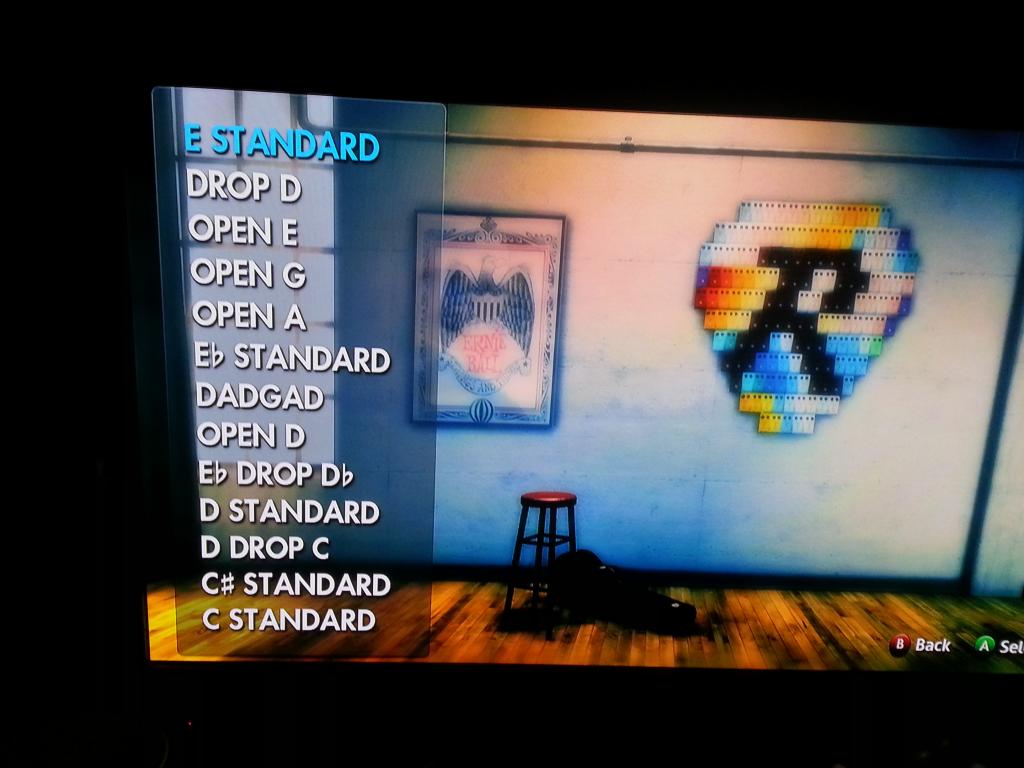 Pavement is the only true band I first thought of when it came to alternate tunings. I got into them after going through library CDs and found them with Quarantine the Past, simply from the cover. GOD, this band!
Then, I thought of Soundgarden. Not of Rusty Cage, however; I was leaning more towards The Day I Tried to Live (Open E).

How are Pavement underrated, they’re considered the most influential thing out there for Indie rock (as a genre) and some big name critics (Robert Christgau for example) call them the best band of the 90’s. Their Slanted and Enchanted and Crooked Rain, Crooked Rain albums also both made Rolling Stone’s 500 greatest albums list at 135 and 212 respectively, with Slanted and Enchanted beating out albums like Ok Computer (162), Arcade Fires Funeral (151), and Pink Floyd’s Wish You Were Here (211). And on top of this Gold Soundz was called the greatest song of the 90’s by Pitchfork, who are influential in the underground/ new name of alternative scene. If anything Pavement is on the list of bands that people should be calling overrated (even if they’re wrong) because of how highly rated they are.

Maybe “overlooked” is a better term?

Maybe “underrated by everyone but hipsters” would be better? :trollface:

I would definitely love some Alter Bridge to be included!

I hope there will be some open G DLC. Rolling Stones songs like Brown Sugar, Start Me Up, Can’t You Hear Me Knocking etc. Are all great songs with open G tuning.

It has to happen, there’s no way we just got Open G for “Unnatural Selection” bass lol

Can’t You Hear Me Knocking, one of the best Stones songs!!

“Mayonaise” by Smashing Pumpkins: Eb-Bb-Bb-Gb-Bb-D
One of my favorite songs by them.

Sonic youth and pavement would be great additions like dirty boots, range life some of the best 90s music made

Cool article. Nile, Sonic Youth, Melvins, and Zeppelin would all be welcome additions.

Good questions Dave… All I can say is that I have replaced my strings twice since getting rocksmith 2014 on launch day!!! Maybe it was just a bad set of dr black beauties or all the changing of tuning does in fact play havoc on the strings!! I have suspicions about the posts as well. Cause my d string had to be turned 3 time before the not starts to change and that has only happened since rocksmith 2014 as well!!! Lol

GIVE US PAVEMENT UBISOFT 😀

With all the time spent changing my tunings I wonder if it hurts the lifespan of the strings…?

I wonder that as well. Also, I hate songs with big bends, because I always have to retune after I play them--sometimes even during the song.

I just find it a bit ironic that when they initially launched Rocksmith 2014, they said we would spend less time tuning then we did in the previous version. To the contrary, I have actually found that I spend more time tuning my guitar when playing, especially under the Non-Stop Play mode.

One thing that could help speed this up would be to make playlists easier to create for this particular mode. Also, rather than a timer, why don’t you just let us make a playlist and then hit play (and not even worry with a timer).

Other than the increased song library, I fail to see the any added benefit from adding the alternate tunings to Rocksmith 2014.

Increased song library is the entire point of the game. The song is literally built on it’s song library.

By “less time tuning” they meant less time actually in the process of tuning (you can argue whether or not that that is true with the new, more sensitive tuner) not that you’re literally never going to have to tune. Would you rather they just pitch shifted everything to E Standard and have it sound like garbage?

Songs are in different tunings, you have to tune to play them. Just like you would live.

Whenever I play RS2014 I just play in one tuning for a set amount of time, and then I just go to the Drop D songs (for example) and play around there.

On songs that could use this, some Velvet Underground songs use Ostrich Tuning (All strings tuned to the same note), that’d be neat.

I know the point of the alternate tunings was to get more songs. I’m just saying that in NONSTOP play you actually end of tuning more time tuning because it seems every other song is standard, then E sharp, then E flat, then Drop D, then back to standard…and that’s annoying to me.

Yes, I could fix it by altering the play list, but that takes a while as well. I have just started skipping songs that have other than standard tuning, unless I really want to play the song for some reason.

I literally want to be able to put down the controller, and then play guitar for a straight 90 minutes without having to pick up the controller again. Ubisoft could make this easier, by simply adding a couple minor features.

Or by selecting 15 to 20 songs, creating a play list, and then playing that playlist.

Was considering including “Venus in Furs” but decided against it.

“Increased song library is the entire point of the game.”

How do ya figure? To me, the point was to fix the problems that plagued the first Rocksmith, with the expanded lessons being the other main selling point.

In the first Rocksmith, you had to turn before every single song. In 2014, you only tune once for each tuning, which saves a great deal of time.

We are tuning before songs less. With a little prep everyone can play for as long as they want in each tuning but it is easy to get used to tuning fast. You should be able to feel how much of a turn the key needs for you to hit the sweet spot.

When you see a band live they tune in-between songs. The band I am in switch tunings often but it is fast and seamless from practice. For our setlist strengths lies in the position of the songs and not the tunings so it can be a hassle without practice.

Alt tunings are ‘kay, I guess. Though not many good songs use ’em. And of course, Vibrato equipped guitar users gonna rage, but the planet will keep turning nonetheless…