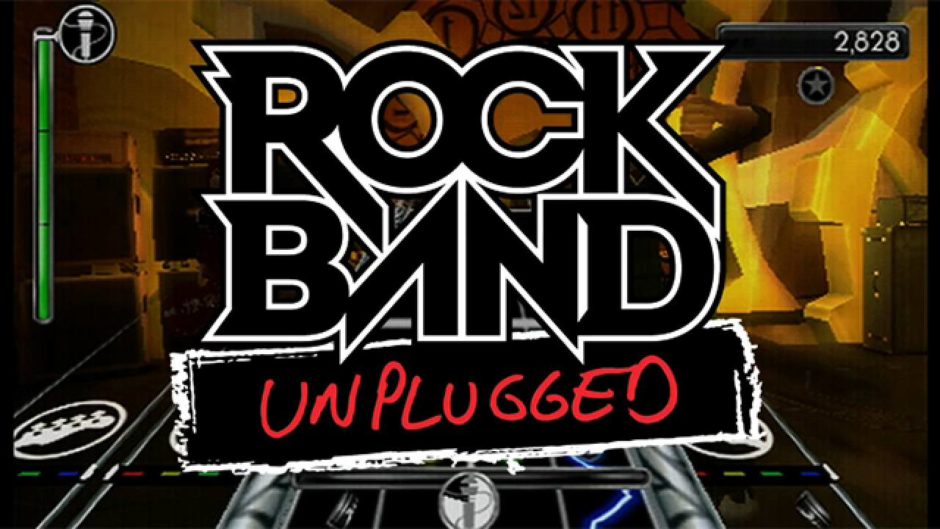 Guitar Hero had some success with their portable spin-offs On Tour and On Tour: Decades, so it’s only natural that Rock Band would want to get in on the fun. Rather than go on the Nintendo DS and have similar gameplay with something like the Guitar Grip, Rock Band Unplugged was released on the PSP with full band gameplay similar to previous Harmonix titles Frequency and Amplitude.

In order to capture the full band experience, players would have all four instrument tracks running simultaneously with the goal being to switch between the tracks and successfully play notes on all of them to temporarily clear the highway for the instrument. Not playing well can cause all the highways to fill up with notes requiring more attention to make sure you don’t fail out.

The game was also received somewhat better than the On Tour series, likely having to do with the lack of a hand-cramping peripheral to deal with, as Unplugged just used the PSP’s buttons like a conventional game. The lack of multiplayer was a big detriment for most fans, however, as a hallmark of the Rock Band franchise was its party-friendly multiplayer gameplay.

Much like how the two On Tour games could be considered spin-offs of various Guitar Hero games, Rock Band Unplugged shared a lot with Rock Band 2. Many of the venues and aesthetics are directly taken from RB2, as well as multiple songs. 22 of the 41 songs in the game are shared with the console title, and the rest are made up of DLC songs. Four of the songs in the game, however, made their Rock Band series debut through Unplugged, although they would later be released as DLC. They are as follows:

Of the total 41 song setlist, a whopping 24 are currently playable in Rocksmith, for a total of 58%. This beats out Rock Revolution’s impressive 51% as the highest we’ve seen so far on Setlist Sunday!

* Denotes a re-recorded version of the track

In addition to the main game, there was also a decent sized selection of DLC. The 57 songs released for the game were all selections of popular Rock Band console DLC, although owners of the tracks on PS3 wouldn’t be entitled to download them on the PSP. Of the 57 songs put out as DLC, 26 are available for a grand total of 45%.

Given the sizable portion of songs in common with Rocksmith and the comparatively limited number of DLC songs, we’ve decided to feature both the main setlist and the DLC in our picks for songs we would like to see on Rocksmith eventually.

Sure, it’s probably not the most complex song in the world; and some might call it a children’s song; but there’s definitely something valuable in it’s varied melodic bassline and just plain joyful catchiness. Since Michael Jackson’s solo songs have proven quite hard for rhythm games to acquire, the fact that a few have songs from his Jackson 5 days would at least give us some hope for either to appear in Rocksmith.

This dark-tinged funk-rock/grunge-rock track from one of the most notable supergroups in modern music would make for a great addition to the Rocksmith library. I’ve also felt that Tim Commerford’s bass work has been quite underrated, and this song shows a well-varied, groovy bassline.

Sure, we may have had a Megadeth 5-pack somewhat recently, but when isn’t there a time to headbang along to some challenging thrash metal guitar and bass charts?

As well as being a typically well-polished track we’ve come to expect from the likes of Steely Dan, My Old School has quite a challenging bassline that really picks up partway through the song. Walter Becker’s multiple guitar solos would make for a fun ride for more advanced guitarists.

Spinal Tap – Back From The Dead

Even fictional bands deserve some love! In spite of this song’s heavily tongue-in-cheek lyrics, it features some fairly intricate acoustic guitar arpeggios and a tapping solo.

Foo Fighters – Lonely as You

One of the instrumentally and lyrically heavier tracks in the Foo Fighters catalog (though you wouldn’t think it by the opening alone). Its dissonant melodies may turn some off, but dig a little deeper and you may find a welcoming addition for anyone looking for a heavy, more chord-filled song that isn’t too challenging to play.

Sharp, dissonant, grating, cathartic, exhausting to listen to; everything that makes grunge what it is: Kurt’s use of heavily unusual chord progressions would provide a chance to learn about harmonic variety beyond simple scales, even if he probably didn’t know what that was when composing this song (it’s grunge, it’s not supposed to be jazz).

Speaking of intentionally grating and dissonant rock music; we’ve been waiting quite a while to hopefully see some Nine Inch Nails show up in Rocksmith. If nothing else, Trent Reznor’s absolutely mad tones would scratch Ubisoft’s creative tone-designing itch and give session mode users another fascinating tone to experiment with. By the way, is it just me, or does Trent Reznor look just like Sirius Black from Harry Potter in that music video?

Pretentious? Maybe. Challenging to play on both guitar and bass? Absolutely! Boy we are ending this Setlist Sunday on a dark note with four depressingly dark songs in a row. Perhaps we should revisit ABC from earlier in the list to lighten the mood:

So those are our picks, which songs would you like to see on Rocksmith 2014 from Rock Band: Unplugged? Let us know in the comments!

You can update it, Heartbreaker and She’s Not There have been added.

I would love to get AAF’s cover of Smooth Criminal in Rocksmith!

Just throwing this out there but, Chop Suey isn’t in rocksmith.

Sorry about that; thanks for pointing it out.

No problem, it was an honest mistake.

Fixed now. Thanks for the heads up!