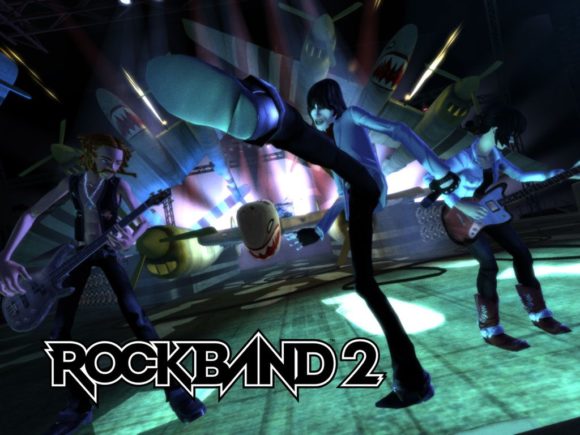 If you were to ask the casual rhythm game fan what the height of the genre was, they’ll probably tell you it was either Guitar Hero III or Rock Band 2. Even hardcore Rock Band fans will often swear up and down that Rock Band 2 was the best one. Featuring an absolutely massive career mode, the largest setlist in franchise history (a feat which has yet to be matched in a Rock Band game), and one of the longest post-release support windows ever seen in a non-MMORPG, delivering huge quality and quantity DLC every week, it’s not hard to see why fans consider Rock Band 2 to be the absolute peak of rhythm gaming both functionally and culturally.

As I’d mentioned, the big new addition to Rock Band 2 was a robust World Tour mode. As opposed to the original Rock Band‘s “here are the songs in this setlist, play them all to unlock the next set” career mode, World Tour mode gave you a huge amount of options. Things such as your hometown, choosing staff to get you benefits like more money, or more fans, or different gigging opportunities, as well as a variety of different setlists including pre-made, random, and choose your own. Along the way you would have certain setlists pop up to help you advance as clearing them would unlock things like roadies, a tour bus, or even a private jet.

The setlist featured something for everyone from massive pop-rock hits to riot grrrl to classic rock to thrash metal to prog and everything else in between. Huge acts like AC/DC, Guns N’ Roses (with the first public taste of the then-upcoming Chinese Democracy), and Bob Dylan were mixed in with smaller groups like Interpol, Dinosaur Jr., and Lush. It even gave Rock Band it’s first “devil tiered on everything” song with Judas Priest’s rip-roaring Painkiller!

Also of note is that for the first time in rhythm game history, the setlist featured zero “as made famous by” cover versions, instead having all 84 of the songs being the master track. A few songs in the game, however, are re-recorded versions done by the original band. This would set the standard for virtually every major rhythm game that followed.

Of the 84 song setlist, 29 are currently available, which is just over 1/3. That 34% puts it significantly below the original Rock Band’s 45%, and is second only to Guitar Hero: Aerosmith‘s 10% for the lowest percentage available in Rocksmith.

It was super difficult to narrow this list down to only 10 songs we want to see in Rocksmith, but somehow we did it. With that said, here’s what we’d like to see:

Bob Dylan – Tangled Up in Blue

Rocksmith was the first game to ever get Bob Dylan DLC and it was a personal favourite for me and for my money some of the best content they ever put out. This fast paced acoustic track would be a great campfire song to learn and would be a blast to play.

I mean, people have been clamouring for Guns N’ Roses DLC in Rocksmith, right? All joking aside, Shackler’s Revenge may not have Slash playing guitar on it, but it does have Buckethead, so you know you’re in for a technical challenge. Plus, Chinese Democracy is actually a really good album and if you don’t go in to it expecting it so sound just like Appetite for Destruction, you might just see that too.

One of the biggest things I see pop up during weeks that aren’t metal is that Rocksmith doesn’t have enough metal. Well, hopefully GRAMMY Award winning metal band Jethro Tull can solve that problem! I mean, the flute is a heavy, metal instrument after all! Seriously though, Aqualung is an iconic progressive rock track and features a great main riff, a few good solos, and an ever changing pattern. Let’s make this happen, Rocksmith!

Remember that massive boom of emo music we had in the early 2000s? We’ve gotten My Chemical Romance (twice), we got Fall Out Boy, and we even had some Thirty Seconds to Mars. One of the few massive acts from that era we haven’t seen? Jimmy Eat World. Sure, The Middle might not be the most technically complex song ever recorded, but it would be a great entry point to beginner guitarists and provide a beloved song to Rocksmith fans.

Just imagine the tones. I honestly don’t know how well shoegaze music would work in Rocksmith, but there’s a lot of really interesting guitar work going on in these songs and it would be really interesting to be able to fully break down exactly what’s going on behind all the fuzz. Plus, Lush are an awesome band and they’re putting new music out finally so who knows?!

I’m a young Canadian guy. This basically means two thing: I listen to Q107 and I love Rush. The Rush content in Rocksmith is certainly good, but with the exception of Headlong Flight, it’s all from their poppier 1980s output. Their progressive rock era from the 1970s would be greatly appreciated in Rocksmith, and The Trees would be the perfect starting point for a Rush Song Pack II (with 2112: Overture/The Temples of Syrinx, Bastille Day, Working Man, and La Villa Strangiato perhaps). The fun alternating between acoustic and electric would provide some great tones, and of course, Rush means that the basslines would be incredible.

Among the genres we’ve mentioned to be lacking in representation in Rocksmith, Jazz and similar genres like Jazz-Rock and Jazz Fusion always comes to my mind. Steely Dan is unarguably one of the most popular Jazz Fusion and Jazz-Rock artists of all time, and their nearly spotless pedigree of top-notch production and instrumentation on all of their albums would make them a joy to play on guitar. Bodhisattva is a bit more blues-influenced than Jazz, but the lead guitar part would be a great challenge to try.

There’s a little bit of New Wave in Rocksmith, but nowhere near enough for my tastes. Talking Heads are one of the most notable bands in the genre and Psycho Killer is one of their most well known songs. It’s based in relatively simple guitar playing, but there’s a lot of really interesting rhythmic stuff going on with it that would make it a blast to play. Also, the Stop Making Sense performance is fantastic and you should watch it right now along with the rest of that film.

That Handsome Devil – Rob the Prez-O-Dent

A great blues-inspired riff and a fast paced delivery combined with constant tweaking of the guitar part throughout the song are sure to make this song a hit in your Rocksmith library. Rob the Prez-O-Dent is one of my favourite bonus songs in any rhythm game period and I’d love to be able to play ANY That Handsome Devil in Rocksmith.

There’s our picks, what songs would you like to see from Rock Band 2 end up in Rocksmith 2014? Let us know!

When Everlong was not a part of the first Foo Fighters pack, I know a Rocksmith sequel was in the works!

Shooting Star or *anything* by Bad Company -- at least from the Paul Rodgers years. Glad we do have that one Free song.

I get the feeling that “Ramblin’ Man” is another of those ones like Boston’s “Hitch a Ride” and The Cars’ “My Best Friend’s Girl” that would require additional permission to pitch-shift it down by something akin to a semitone to get it pitched to E Standard A440 (even officially-licensed TABs of it say the tuning is E-sharp standard, as did those of “Hitch a Ride”, and I have just checked a few live performances where it was noticeably lower, suggesting another case of a sped-up tape).

Pfff Lazy Eye is on there and you pick some real rubbish in preference. Luckily its easily learnt already. Gief Silversun Pickups pack.

Rocksmith has far too much metal tbh.

Beck -- E-Pro
Bob Dylan -- Tangled Up In Blue
Cheap Trick -- Hello There
Jethro Tull -- Aqualung
Metallica -- Battery
Norman Greenbaum -- Spirit In the Sky
Panic! at the Disco -- Nine In the Afternoon (but I’d want this with the album opener in a two-fer)
The Replacements -- Alex Chilton
Steve Miller Band -- Rock’n Me
Talking Heads -- Psycho Killer

Joan Jett, The Middle and Lump get honorable mentions.

I’d like other songs by AC/DC, Blondie, Devo, Grateful Dead, GNR, The Mighty Mighty Bosstones, RHCP (any song but Give it Away -- really).

This is the only plastic guitar game I played (this and The Beatles one).

I never bought Rock Band games, but so many of my friends had this game that I played it quite a bit. Guitars were ok, but the drums blew everything else away in terms of realism. Also, I was the only one in my group of friends who enjoyed the drums and could play them well so I got to do drums every time we played. I went to a lot of house parties that had this game playing in the background. Good memories.

Any chance RS will ever add keyboards or drums to the game? I feel like keyboards is a ridiculously easy and sense-making addition, because they are already electric and can plug into amps easily. Also, there’s already many songs in the catalog with piano/keyboards. Some game company will do this eventually. Why not you?

there was a Rock Band keyboard. I had one, it was unbelievably hard. I agree the drums were great, although the 5-drum GH drums were much, much better than the 4-drum RB drums.

I was playing expert drums round my mates on saturday night after a few hours of rocksmith. great fun and a good work out.

But RB drum got cymbals expension to bring the total to 7 element (kick pedal excluded).

I just adore the opening bassline to Souls of Black. However, Shacklers Revenge may have Buckethead but it’s still Guns and Roses, so I say please stay away. Of course, Steve Miller is a great addition and I applaud any southern rock songs (even Ramblin Man)
Also to finish off, Hello There, Shooting Star, and Lazy Eye.

AFI’s Girl’s Not Grey is available as dlc.

But rocksmith has girls not gray, hasnt it?

Yep, we do. I even checked my master list and it was marked off that we have it. For some reason it didn’t come over here. Weird.

Never played this game, but we definitely miss many of this list. Notable ones for me:

Yeah, 3 of them we’ll probably never see in Rocksmith, I know.