If you were paying attention to Social Media yesterday you may have noticed a few tweets from @Rocksmithgame celebrating 1000 playable songs in Rocksmith: Remastered!

In addition to the infographic, there’s going to be quite the giveaway tomorrow to celebrate!!

If that doesn’t fully illustrate just how much musical variety we offer across 1,000 songs, maybe owning the whole library yourself will drive the point home. Join us for our weekly developer livestream this Thursday at 2pm Pacific/5pm Eastern/10pm UTC, where we play some new songs, answer some questions, and give away great prizes from Ernie Ball. This week, there’s even more free stuff: One viewer will receive the entire Rocksmith library for Steam. Someone’s going to win both Rocksmith and Rocksmith 2014 Edition Remastered, playable on PC or Mac, plus the additional 900 or so songs we’ve released, from Lynyrd Skynyrd’s “Free Bird” right up through Skid Row’s “I Remember You.” We’ve never done this before and we’ll probably never do it again, so join us this at http://twitch.tv/rocksmithgame this Thursday for your chance. Someone’s going to win it all; why not you?

That would make switching to PC/Mac all the easier, wouldn’t it?

Also, be sure to check out the absolute mad man @elisoncrz as he attempts to play all 1000 songs on Twitch.TV

How long is that going to take exactl- 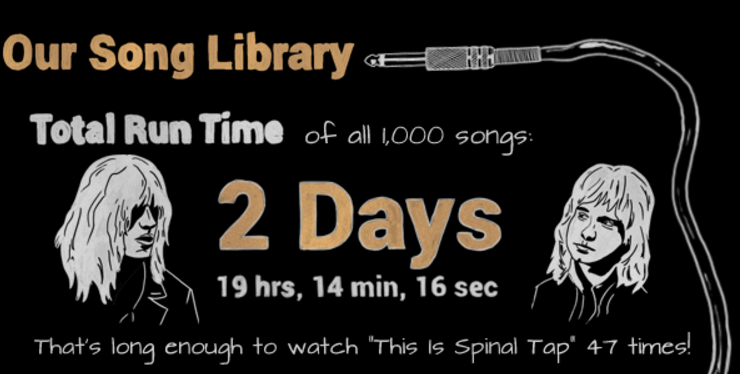 Yesterday, @UbisoftStudioSF was nice enough to allow me to sit down with Manager of Musical Content, @BrianAdamMcCune and Director of Design, Paul Cross (@CrossieRS) regarding Licensing, Our wonderful community, the request app, and of course… Metallica.

This is a great graphic, however; I really wish that they would revise the Top 40 List. Who are the Top 40 Most Requested Artists Yet to Appear in Rocksmith? That’s the list I want to see. Of course AC/DC, Guns R Roses, Zeppelin, Metallica, Van Halen, and ZZ Top will still be there among other already mentioned.

A new list would shed light on other highly requested artists. I’d like to know if any of the following would make the revised list (in no specific order):
John Mayer (w or w/o Trio)
Prince
Brad Paisley
The Isley Brothers
Huey Lewis & The News
Muddy Waters (still can’t believe we have Howlin’ Wolf but no Muddy-and I’m more of a Wolf fan but respect is due)
George Thorogood and the Destroyers
Whitesnake
John Mellencamp
Genesis
Jimmie Vaughan
Bonnie Raitt
Morgan Heritage (I’d prefer more Marley or Black Uhuru, had to get reggae on this list somewhere)
Chuck Berry
Journey
James Taylor or Jim Croce
George Benson
The Fugees
“Weird” Al Yankovic (c’mon that “I’ll Sue Ya” is good)
Robert Johnson
and I’ll end on a big note…….
FUNKADELIC. (you know what time it is.)

Clicking on the Coheed & Cambria link got me depressed. 3 years later, still no Coheed. Still got my fingers crossed.

Love this Post. N’ I was right we need more 80’s music. I tell somebody I know and I’m a DJ. So when someone tell me they play Guitar or Bass. I tell them about ROCKSMITH If you play Guitar or you always wanted too ROCKSMITH is the best, fastest and the most fun way to play guitar. N’ Thanks again for adding my Favorite band in the world MOTLEY CRUE. -- DJ TOMMY FRIEND

Top 40 no longer has Slayer?! BETTER START WORKING ON THOSE SLAYER REQUESTS GUYS!