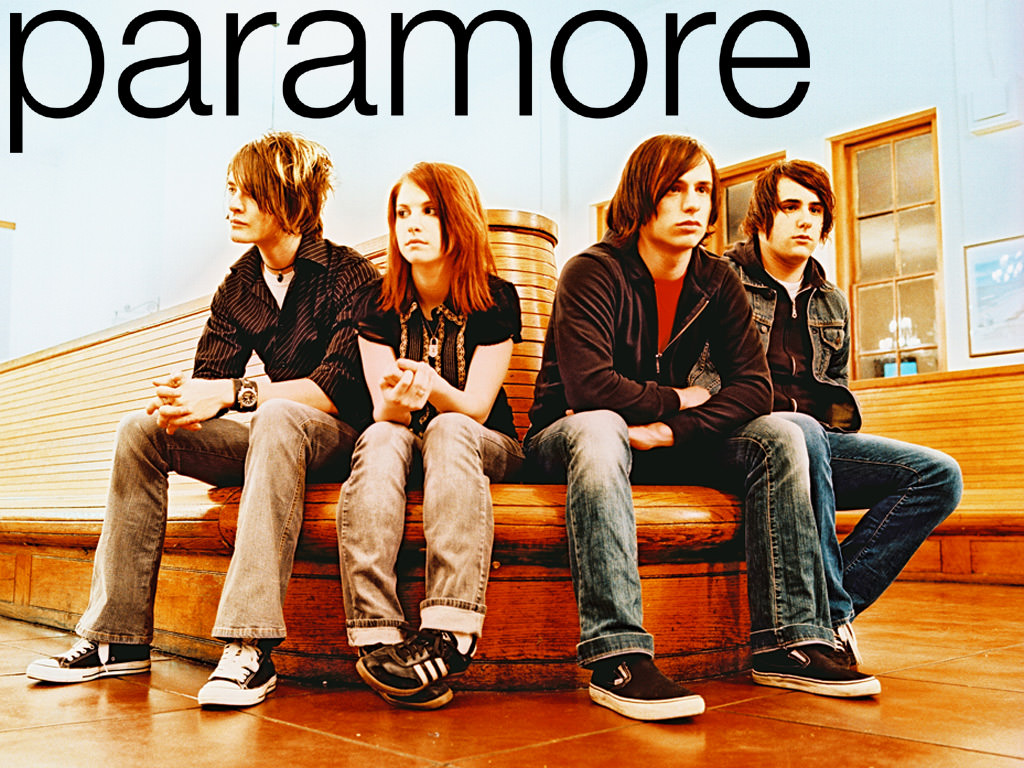 Hope you enjoyed that little break with The Man in Black, but it’s time to get back into the swing of things with another clue from RollingStone222! 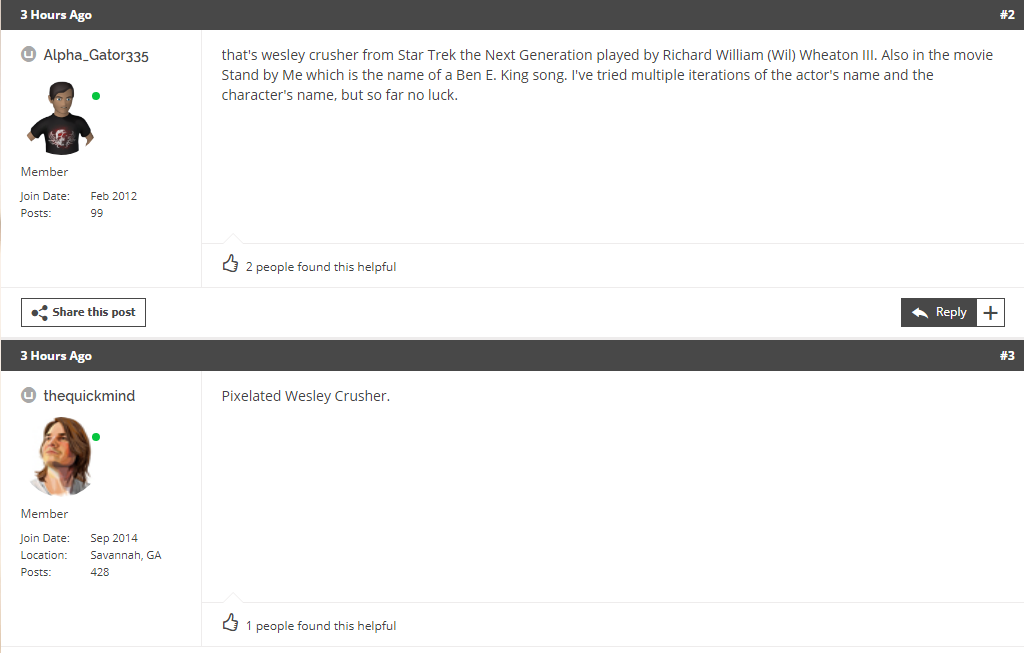 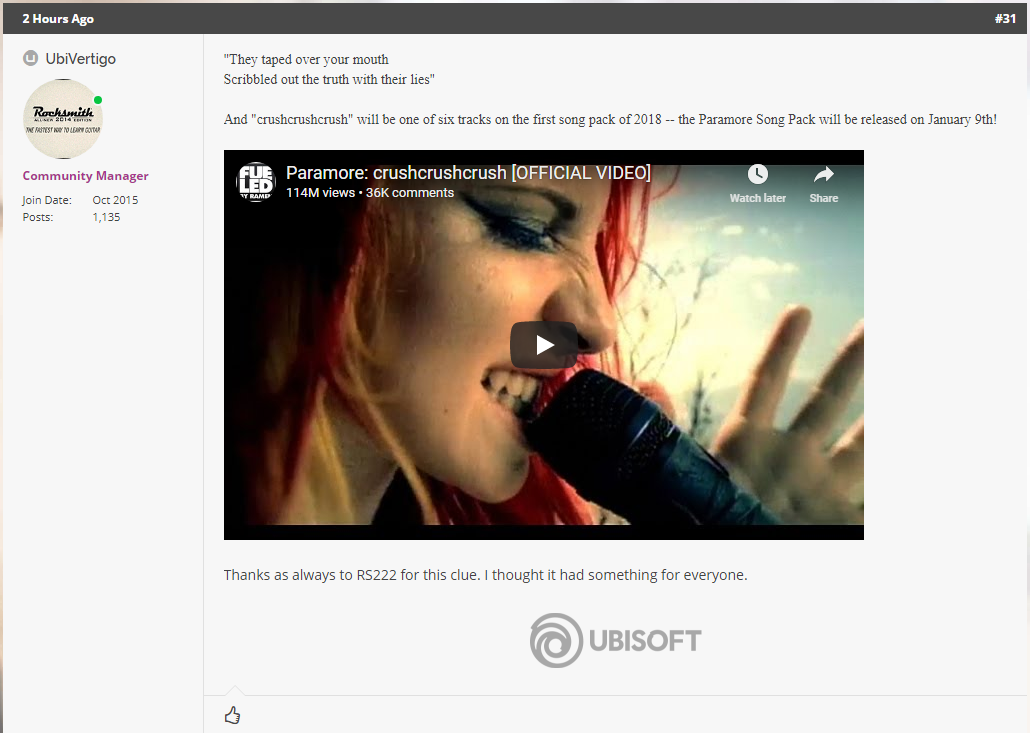 Nicely done, and it’s a SIX PACK! (Our fourth one)

Paramore has only had one song in Rocksmith 2014, and it’s part of the on disc setlist!

Since the release of Rocksmith 2014, there has been an out-pour of requests for more songs from @Paramore…

@emb0re unlikely – Paramore have moved on from their early work and have thus far declined to license them. sorry.

Paramore is however no stranger to other music games, with their debut being crushcrushcrush as Rock Band DLC in 2008 followed up by the release of Guitar Hero World Tour featuring @yelyahwilliams as a playable character to perform Misery Business with. Rock Band didn’t stop there as over the years they’ve received three on disc songs That’s What You Get (Rock Band 2), Misery Business (Rock Band 3), Still Into You (Rock Band 4) a song pack in 2012 featuring Brick by Boring Brick, Ignorance (which is also in the ill-fated Powergig), and The Only Exception. Rock Band also received Pressure via the Fueled by Ramen DLC, and last but not least as a single in June 2017 (care of Rock Band VR), Ain’t It Fun.

Before their hiatus Guitar Hero’s final DLC release actually contained two songs from Paramore, including Ignorance, and That’s What You Get. It wasn’t until 2015 with Guitar Hero Live (GHTV), that they added Now, Monster, and finally Still Into You.

Knowing all of that, what is in store for us for the other five songs next week?

Wouldn’t be a Paramore pack without this song…

Gotta have some new stuff…

Not everyone is tired of this from Rock Band, I swear…

hopefully this riff will be our new best friend

So it begins, we have the first DLC of 2018 on the way and it’s a SIX pack from a Top 40 Requested Artist! Are you excited for this or are you going to passpasspass? Let us know!

Good thing you don’t have to sing in Rocksmith *phew*

We've got a tight grip on reality, and we're looking forward to the first #Rocksmith DLC of 2018 this Tuesday… pic.twitter.com/Izm7gwlTnm

When it Rains
Turn it Off
All I Wanted

Now that I’m reminded of playing these songs on Rock Band 3, I’m actually excited to get them in Rocksmith. Love that it’s a six pack.

How happy I am, I can not comment but just this Friday was my birthday and I love Paramore. I’ve been wanting for a while to get a DLC out of them and on top of that with 6 new songs (THANKS).

I would like there to be some of the new album but that usually does not happen (apart, that I remember, Bang Bang of Green Day). My predictions are…

Misery Business.
Ain’t it Fun.
Pressure.
Still Into You.
That’s What You Get.

This just makes me think of the whole American idol generation with its over produced marketed brand of music like kelly clarkson. I have visions of l7 and bikini kill using these records for target practice

Nice, a six pack! Long time I haven’t seen one… *hem*
Definitely up for this. The “most likely” songs we’ll see are those you mentionned I guess:

-- Misery Business
-- Brick by Boring Brick
-- Still Into You
-- That’s What You Get
-- The Only Exception (yeah this one is less of an evidence, but a personnal fav’)