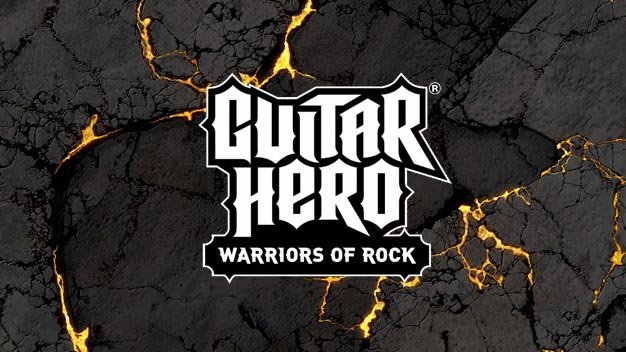 There are many who would say that Guitar Hero had lost its way. Between DJ spinoffs that were REALLY good, pop themed spinoffs that were pretty decent, portable spinoffs of varying quality, and a Van Halen spinoff that was just bad, the Hero brand had lost its lustre. That’s why in 2010 Activision announced Guitar Hero: Warriors of Rock and with the opening notes of Children of the Grave anchoring the trailer it really did look like everything the hardcore Guitar Hero fan wanted!

Feature-wise, not too much was changed from Guitar Hero 5, with Party Play and multi-instruments both remaining. The biggest new addition was the titular Warriors of Rock. Each of the eight characters had their own power that would help you out in Quest Mode or Quickplay+. These powers included things like having each Star Power phrase fill up the whole bar, or having Ankhs that would resurrect you if you failed, with the remaining ankhs being converted in to stars. After beating Quest Mode, you would have ALL 8 powers active at once allowing you to earn up to 40 stars on each song. In Quickplay+ you could only select one power, but you could still earn some serious stars with them active.

The biggest new addition was the aforementioned Quest Mode. Narrated by legendary rock star Gene Simmons, Warriors of Rock tells the story of eight rockers who unleash their true power and become monster people (and pigs) to defeat the Beast, who is a giant guy made of metal and I think he wants to destroy music or something and also he trapped the Demi-God of Rock who used to be the God of Rock from Guitar Hero III but he made himself human for some reason? I don’t know, the story isn’t actually explained all that well.

The true highlight of the Quest Mode is easily the 2112 segment that comes halfway through the mode. Narrated by the members of Rush, it features the entire 20+ minute 2112 split up in to seven segments. Between each segment, the members of Rush tell the story and provide additional context. Each section also features a unique 2112 themed venue. Speaking personally as a huge Rush fan, it’s one of the best moments in any rhythm game for me.

As for the setlist, after a couple games focusing on more mainstream songs, they went more obscure focusing again on great guitar songs instead of karaoke favourites. Even more mainstream acts like Orianthi and The Rolling Stones had songs that focused on fun guitar parts instead of being massive hits. Blistering metal songs from acts like DragonForce, Children of Bodom, and The Dillinger Escape Plan were featured in spades, as well as some of the hardest instrumentals ever featured from Steve Vai and John 5. Even Megadeth had three songs in the game, with one of them (Sudden Death) being recorded exclusively for the game with the goal of being one of the hardest in the series.

Hardcore reception to the game was phenomenal, but on the critical side it fared worse. The quest mode was criticized for being hokey and the powers were felt to be broken and made the game unfun. The setlist was also criticized for being very hit or miss and lacking in iconic rock songs. Overall, the sales of the game were very underwhelming, selling 63% less in its first week than Guitar Hero 5 did a year ago. Because of this, in early 2011 Guitar Hero DLC was no longer produced and the series was put on hiatus.

Of the 93 songs featured in Guitar Hero: Warriors of Rock, an impressive 35 are currently featured in Rocksmith 2014 Remastered for a total of 37%. That percentage can increase, however, to 40% if we count 2112 as a single song as opposed to the seven individual parts Warriors of Rock featured it as. Regardless, it puts it on par with Rock Band 2, and roughly in the middle of the road for completion, and is an increase on the last few games with Guitar Hero 5, LEGO Rock Band, and both Band Hero games all being substantially lower.

NOTE: While Free Ride is a re-record in both Guitar Hero and Rocksmith, the two games use different re-records.

There’s a lot of great songs in Guitar Hero: Warriors of Rock, but somehow we were able to narrow it down to these select few that we REALLY want to see in Rocksmith 2014 Remastered!

Black Sabbath – Children of the Grave

How the original metal band has yet to make an appearance in Rocksmith is befuddling, but Children of the Grave would be a perfect anchor for them to debut with. Featuring one of my personal favourite metal riffs ever, the haunting quality of this song combined with fantastic guitar work from Tony Iommi would make it perfect for any guitarist who wants to play some more metal.

Another atmospheric gem with some really cool stuff going on under the hood, Fascination Street would also go a long way in helping Rocksmith with their tragically small new wave catalogue.

Smoke on the Water and Highway Star are good starts, but they don’t even begin to scratch the surface of the true proggy greatness that lies in Deep Purple’s catalogue. Burn starts at 100mph and never slows down with solo after solo just coming at you for just over six minutes! Hopefully in Rocksmith there’d even be an alt-lead option that would allow you to take on the organ solos, too.

Dire Straits – Money for Nothing

Ubisoft knows how much we all want Dire Straits and, while licensing has been tricky, more and more “white whales” seem to be opening up to rhythm gaming and becoming less impossible. Here’s hoping that pretty soon we can cross Dire Straits off of the missing list!

Neil Young has also been a bit tricky when it comes to rhythm games. This is his only appearance ever, and even the Buffalo Springfield song in Rock Band doesn’t actually have Young’s playing on it. If this is the only song he’s willing to license, however, that’s fine by me. It’s a great driving hard rock song that, while it may not be the most representative of what Neil Young sounds like, would fit in nicely in the Rocksmith catalogue.

A true staple of Canadian classic rock radio, Lunatic Fringe is one of my personal favourite songs of the 1980s. With a somewhat simple main riff, this song would be perfect for more beginner guitarists while still offering some intricacies to keep more adept players interested. Hopefully this can be paired with Life is a Highway and Big League to give Tom Cochrane and Red Rider the rhythm game appreciation they deserve.

Maybe it’s not the first song you think of when you think Rolling Stones, but that doesn’t mean it isn’t one of their best. A great dirty blues song with some fabulous rhythms going on, it would be a shame to not get this one whenever that Rolling Stones pack finally arrives…

Yes. The whole thing. It’s one of the greatest songs ever recorded and one of progressive rock’s biggest masterpieces. It’s over 20 minutes of pure proggy greatness and features dozens of amazing riffs for you to learn, as well as four brilliant solos. While it’d probably have to make up its own week, much like it did in Rock Band, there’s no denying how worth it it would be.

You know how it goes. If there’s hardcore punk, I want it in Rocksmith. Blisteringly fast and far from easy, it will make your fingers bleed just as much as any face melting metal song!

Easily the best supergroup to pop up in recent memory, we had a little taste when Rocksmith 2014 launched but since then it’s been strangely silent on the Them Crooked Vultures front. Scumbag Blues has loads of great solos and would provide some AMAZING tones for us to play around with to the point where it’s criminal we haven’t gotten this yet.

I hear the only reason this got licensed is because someone at Neversoft ran into their guitarist at a bar. This wouldn’t be my first choice from TDEP, but I’ll take it.

Love Bad Brains, not so into this song (I think pretty much anything else would be better) but once again, I’ll take what I can get.

Buzzcocks – What Do I Get?

It’s a pop song from a Punk band but rest assured it’s not pop-punk.

My perfect little dream is having @nineinchnails in Rocksmith! I would very much prefer them to use the livetracks which are far more Guitar/Bass driven than most of the classic album cuts.

There’s a lot going on in this song, just wait till the solo kicks in.

Rx Bandits – It’s Only Another Parsec…

Oscar didn’t pick this? I’ll take care of that. Super catchy and as always CC will show off his chops for you before the song is done.

There’s our picks, what songs would you like to see from Guitar Hero: Warriors of Rock end up in Rocksmith Remastered? Let us know in the comments!

Tones of Home ! Please, I want this so much ! A fun song with incredible arrangement, would be fun to play on all parts 😀

lot of good ones from this game, my picks would be Pantera “I’m Broken”, Drowning Pool “Bodies” and FFDP I s’pose

Arch Enemy -- Nemesis is available for rocksmith, but you have typed N/A in the setlist 🙂